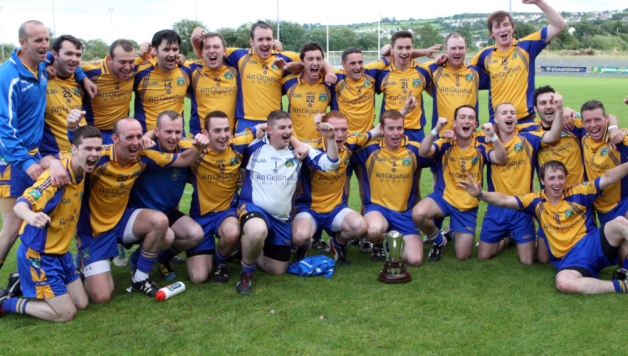 THE landscape of Donegal hurling might have been slightly altered in recent years, yet Burt remain the constants on the horizon.

Just twice in the last thirty years has their name been absent from the Donegal SHC final – and on Saturday the Hibernian Park men go in search of their fourth title in a row, a 35th in total.

Theirs is an insatiable thirst for the small ball game. They won sixteen in a row from 1991-2006 and each one was celebrated with the same zest as the previous.

Now under the direction of Ardal McDermott, a veteran of more than a dozen title-winning Burt sides himself, Burt are back in familiar territory when they face Sean MacCumhaills (O’Donnell Park, 3pm) in Saturday’s final.

MacCumhaills are one of the sides to have emerged as a genuine challenger to Burt’s throne. The Twin Towns men beat Setanta in the 2010 final and lost to Burt in 2012.

For Burt, the desire remains unbroken.

“We’re blessed with a very strong tradition and history in Burt,” McDermott says.

“People ask the same question about teams like the Kerry footballers and Kilkenny hurlers, why do you keep winning championships? We’ve been blessed with talent and a lot of good players, but that mentality of winning shines through in finals.

“Our people and our players like the big days. They’re comfortable when the big occasions come. We respect the occasion and we’re familiar with it.”

McDermott was a part of Ray Durack’s backroom team with the Donegal hurlers in 2013, but stepped away to succeed Ronan McLaughlin as the Burt boss.

He says: “I’ve really enjoyed it. The whole focus this year has been on getting continuous hurling and we’ve done that. The Donegal league and championship are grand, but that doesn’t provide enough hurling for us. We won our Division in the Ulster League and we went up and won our section in the Kilmacud Sevens too.

“Things are going well for us at the minute.”

Niall Campbell has recently returned from a suspension to bolster the strikeforce, while McDermott can also call upon the experience and know-how of Joe Boyle, Mickey McCann and Ciaran Dowds. Ronan McDermott and Christopher McDermott have made the transition and youngsters like Kyle McGrath and Tom Doherty have knocked on the door.

Benny Harrigan will miss the final after breaking a bone in his hand in the group game against MacCumhaills, Paddy Strain continues to recuperate from a cruciate injury and Gareth Quinn has left the panel to join the army.

After missing last year through a hand injury, McDermott himself is back on the playing panel.

MacCumhaills have been transformed in recent years into one of the big players. Don Brown’s men are back in a third final in five years and have welcomed the talents of Lee Henderson back after a spell in America for the ace attacker.

On a night when the calculators were at the ready for the final group games, MacCumhaills scored a 4-12 to 0-12 win over Setanta. A brace from Paddy Hannigan and a goal apiece by Henderson and Jamesie Donnelly secured the necessary points differential.

Young guns such as Philip Doherty, Sean Curran, Conor Griffin and Aaron McAuley have made promising noises, but it will be to the likes of Hannigan, Donnelly, Henderson and Ciaran Matthewson that Brown will look to lead the band on Saturday.

“It’s been a tough road for us this year,” Brown said. “We lost by five points in Burt during the group stage, but we were missing a few that night. We will need to lift our performance by fifteen to twenty per cent this weekend.

“Burt will be a really tough test for our boys. We will need to be at the top of our game.”
Henderson pulled the rabbit from the hat to secure a narrow 1-13 to 1-12 win over St Eunan’s in Ballybofey.

“If we hadn’t got that one, we were gone,” Brown points out.

“We’ve seen a lot of young players come through this year. This is a huge occasion for the club and all we are looking for is a performance. If we get that performance right we won’t be far away.”

The more things change, the more they stay the same – back are Burt as favourites to land the silverware.

“I am going in the confidence that we’re prepared well and we have the ability to win,” says McDermott.