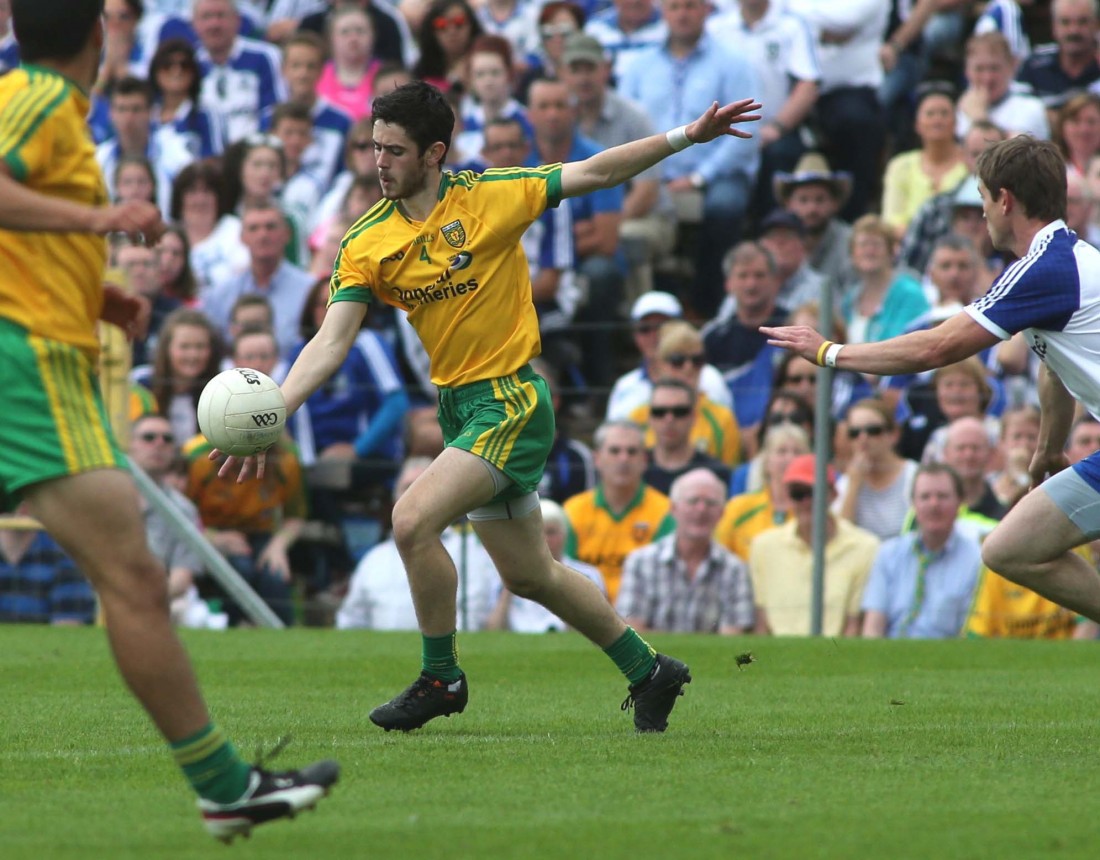 Ryan McHugh in action against Monaghan in the Ulster final. Photo: Gary Foy

WHEN the referee Maurice Deegan let a loud, sharp shrill of his whistle to signal the end of the Ulster final, Donegal felt born again.

2013’s pains had been forgotten as Donegal turned the tables on Monaghan to win their third Ulster SFC title in four years. Thousands climbed over St Tiernach’s Park’s permiter and it wasn’t long before the stewards were instructed to ‘stand down’.

After relinquishing the famous piece of silver against Monaghan a year earlier, the Anglo-Celt was destined for Donegal again. It was a victory that Jim McGuinness would later claim as the best of his time as the Donegal manager given what had been said about his players and the questions that had been levelled at his squad.

When the final whistle came McGuinness was lost in the emotion. A sprint towards the goals at the town end of the Clones stadium ended with McGuinness in a euphoric embrace with one of his players. That the man he picked out was Ryan McHugh should not have been lost. The 20-year-old Kilcar man had just played the game of his life and soon after would be named as the Man of the Match.

“Ah, there were a few players down at that end of the field – I think I was just the first man he came to,” McHugh says. “It could have been any one of us.”

McHugh had been a long-time follower of Donegal’s exploits before he was called up to the senior panel after the All-Ireland success in 2012.

As a boy he’d watch in wonder as the Anglo-Celt was passed between Tyrone and Armagh. When older brother Mark came back with medals in 2011 and 2012 that desire was fuelled further.

“The final whistle was just unreal,” he says of those moments following the 0-15 to 1-9 win.

“I ran over to Rory Kavanagh, he was the nearest man to me, and then Jim came over. It was a great buzz. It took a while to sink in that we’d done it. It was a savage team performance. Every man gave his all for the jersey that day.

“Growing up, that was one of my dreams – to win an Ulster title with Donegal. All the time I was watching them they could never get over the line. The other dream I have is to win the All-Ireland with Donegal.”

That dream still lives with Donegal, following their All-Ireland quarter-final win over Armagh on Saturday, set for an August 31 semi-final showdown with Dublin.

One thing that strikes you about McHugh is the sheer enjoyment he has for what he does.

He says: “I’m really enjoying the football now. You can’t enjoy these days enough. I wake up in the morning now and really enjoy life. I’m working around with dad and you can tell there’s a real buzz about Donegal again for the football. The whole county got a huge lift from it. You can see the smiles on all the faces for ages afterwards.”

He might have had a goal, but shot over from close-range just after Chris McGuinness stunned Donegal when he found the net for Monaghan in the second half to light the fuse. McHugh was played in after Neil McGee and Anthony Thompson combined down the right channel.

He says: “I was going for a goal to be honest.

“Anythony played the ball in and it was a perfect pass. I was in the right place at the right time. I just crept up. Tony could have gone for the goal himself. His finish might have been better!”

He’s the latest line of the McHughs from Bavin to succeed with Donegal’s footballers.

Older brother Mark is now Stateside and playing his football in New York after opting out of the Donegal squad after winning three Ulster medals with Donegal, two seniors and the Under-21 in 2010, collecting an All-Star for his trouble in 2012, while dad Martin has plenty of decorations winning three Ulster SFC’s (1983, 1990 and 1992), an Ulster and All-Ireland Under-21 double in 1982 as well as the All-Ireland SFC in 1992, scooping All-Stars in ‘83 and ‘92.

“I can go back to the dinner table now again!” Ryan smiles.

“It is a good proud football family in fairness. Mum is so supportive of us in whatever we do and dad taught me all I know. After games, I’d always sit down with him and watch the tape again. He mightn’t be too fond of telling me the good things I do, but everyone needs someone to point their mistakes out. He’s always there for a word though and it’s great to have him.”

Many are tipping his cousin Eoin – son of uncle James, another All-Ireland winner from ‘92 – to make the breakthrough to the Donegal senior team in the near future.

The comparisons to the family tree are water off a duck’s back and Ryan is keen to note that he isn’t, in fact, playing the ‘Mark McHugh role’ for Donegal.

“I was just saying to the reporters after the Ulster final, I haven’t actually played as a sweeper for Donegal this year,” he says.

“Mark was an out-and-out sweeper. I played at wing-forward in the Ulster final and played at wing-back against Armagh in the All-Ireland quarter-final.

“We’re two different players, but people will always be looking to compare. They do it with the McGees too and everyone’s always looking at Patrick and Stephen McBrearty. Look at the other counties, the Ó Ses were compared in Kerry and the Brogans are in Dublin. We’ll take the comparisons on the chin and just do what we’re doing.”

McHugh has been one of the stars of Donegal’s summer, which has seen the Tír Chonaill men march to within an hour of the All-Ireland final.

His debut season was a difficult one. With the volume of injuries that plagued their campaign there was increased demand on the weary limbs. It gave the youngster an understanding of the demands of the game, but also he learned about the tough road to be travelled towards success.

He says: “Last year was a tough year, but it would really give you respect for any team that wins back-to-back All-Irelands. That is so hard to do. This year has been better, obviously, and we’re enjoying our football again. Last year was hard for the whole county, but that’s just the way football goes sometimes. It can be hard.”

There aren’t too many who get a chance to play alongside their heroes, but with Karl Lacey alongside him in the Donegal side Ryan McHugh is doing just that.

He says: “I loved watching Karl play. I remember one day watching him man-mark Paddy Bradley when Donegal were playing Derry. I watched it from behind the goal and Karl was just astonishing that day. He goes about it the right way. He’s one of the best trainers in Ireland, never mind being one of the best players. He gives it everything he has all the time.”