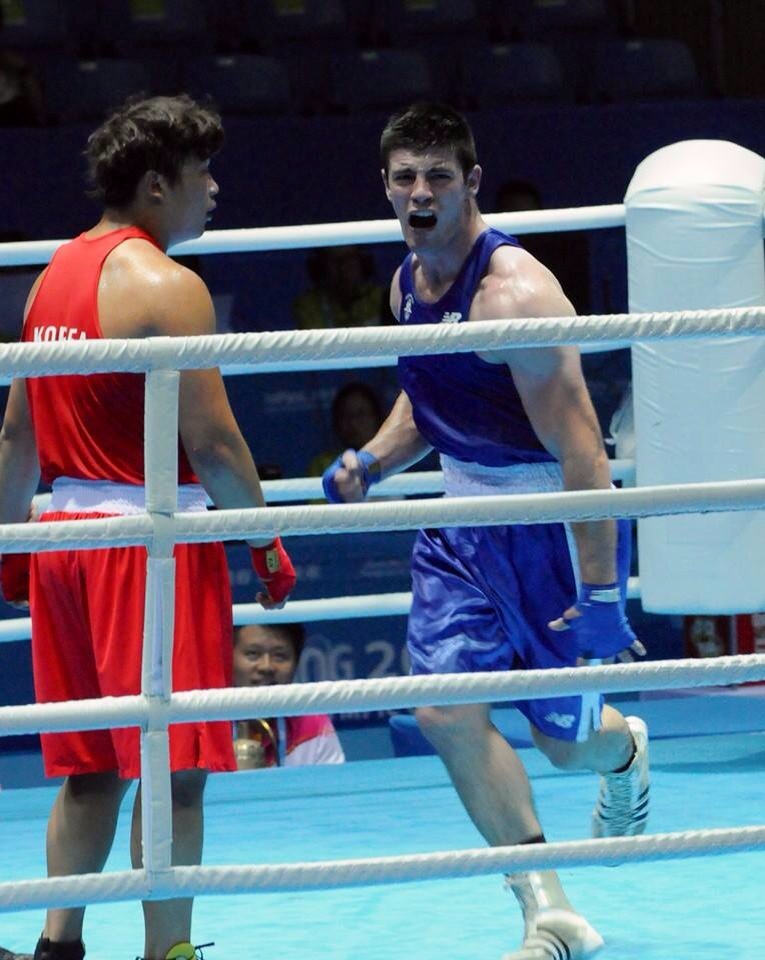 The 18-year-old Kinletter man defeated Kim Jin-Nyong of Korea in Monday’s bronze box off at the Nanjing International Exhibition Center.

It was a dominant display by Gallagher, who rose from the disappointment of a semi-final defeat on Sunday by Cuba’s World champion Yordan Hernandez to secure an Olympic Youth bronze. The hammer handed Gallagher was on top to take a 29-28, 29-28, 30-27 win over the tough Korean, a bronze medalist in the World Championships.

Gallagher’s emotional reaction said it all.

“He had the will to win and Michael wasn’t settling without a medal,” McClean said.

“He has often been the bridesmaid, the boy who went close but missed out. Not any more. He’s a star now. The achievement is huge.

“He has been training in the High Performance Unit in Dublin with us and he has totally deserved the medal. I honestly couldn’t praise him enough.

“Michael was winning rave reviews off people from all over the world.”

Gallagher signalled his intentions from the off, landing some heavy stings to the Korean’s stomach while those trademark power-packed swings were dynamite-fuelled and Jin-Nyong felt their wrath. The Korean youth champion, who trains out of the Kyoung Buk Physical Education High School, ended the round with a cracking left jab, but Gallagher was unmoved and comfortable as he took the stool in the blue corner.

Gallagher continued to probe well with the left jab in round two and a lunging right arm shook Jin-Nyong, by now firmly on the back foot. It was a controlled third round and an ultimately impressive win by Gallagher, a ten-time Irish champion.

McClean said: “We have a real rough diamond in Michael.

“The Korean is what we call a ‘runner’ and he was trying to steal the fight. Michael had to go after him. The Korean was a very good counter-puncher, but Michael kept the pressure on him brilliantly.

“Not only did Michael win bronze but he defeated two of the bronze medalists from the World Youth Championships to get there. He was also the only opponent to give the Cuban boxer a run for his money. Michael gave him a really tough test. He didn’t get another contest as tough as Michael gave him.

“It was a classic punch up with a master boxer against the aggressive Donegal man. There were no backward steps from Michael. He gave it everything and people should remember the Cuban is 6′ 5” and Michael is just over 6′.

“His performances were top class.”

Gallagher had been beaten by Hernandez 24 hours earlier, the same boxer he lost to at the quarterfinal stage of the World Youth Championships in Sofia. However a subsequent win over Thomas Oomen (Netherlands) saw Gallagher qualify for Nanjing. After spending some time at a pre-Games training camp in Hong Kong, Gallagher opened his account with a fine win on Saturday against Maksim Kazlou of Belarus.

The powerful puncher got over Sunday’s defeat to clinch a bronze.

McClean said: “Credit has to go to his coaches in the club, Conor Quigley and Billy Quigley.

“Michael will stay with the Youth Development squad until Christmas hope to get to Zaur Antia in HP and will hope to get a development programme in place for him. Rest first

“He has been superb for us. He’s an outstanding boxer and I just hope that his development keeps going upwards. He has so much potential.”

Gallagher is one of three Irish boxers in China with two medals set to return home. Cork middleweight Christina Desmond, pictured lost out in her bronze medal box-off to Caitlin Parker, but Mayo lightweight Ciara Ginty took silver after losing to Jajaira Gonzalez of the USA, the 2014 AIBA World Youth champion, In Tuesday’s final.

Gallagher’s win is the latest international success for the Finn Valley club.

Peter O’Donnell, the President of the Donegal Boxing Board, hailed Gallagher’s success. “It’s an absolutely fabulous achievement to win an Olympic medal,” he said.

“Michael has done his family, his club and his county so proud. He continues to have success at the top level of the sport and this is his biggest win yet. To be on the podium in China at these Games is fantastic. Everyone in Donegal boxing should be delighted with his win.”