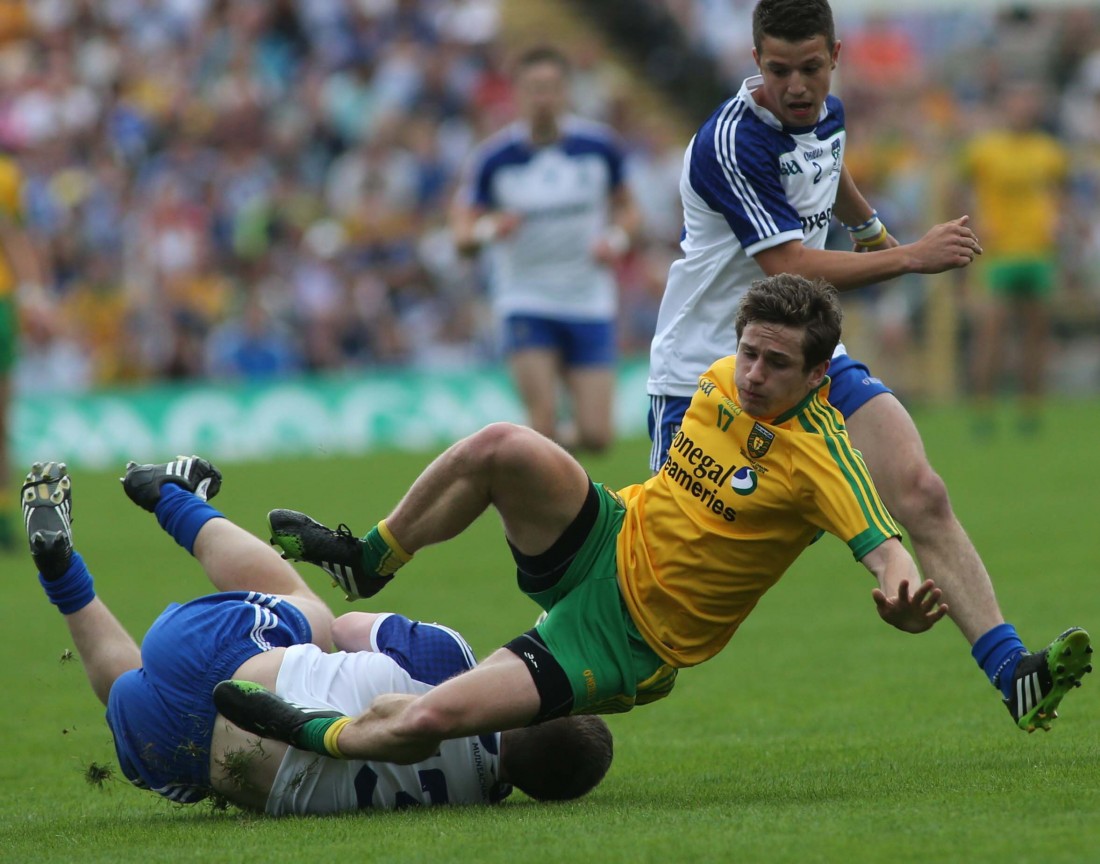 JIM McGuinness and the Donegal squad spent last weekend tucked away at a training camp in Mullingar to fine tune the battle plans that will be rolled out on the table for Saturday’s All-Ireland quarter-final against Armagh (Croke Park, 4pm).

McGuinness and his management team ventured to Croke Park on Saturday evening to run the rule over the two qualifiers and returned again on Sunday for that afternoon’s pair of All-Ireland quarter-finals.

The season is now very much at its business stage. The safety net has been removed and it’s now a case of sinking or swimming.

McGuinness believes he has men who can handle the currents of the deep end and what he believes will be a ferocious test put in the path of his side by an Armagh team that has managed to dominate even more headlines this week than they’d have got had they been co-operating with media.

Armagh have galvanised themselves and have managed recorded impressive wins over Roscommon and Meath since Monaghan ended their Ulster hopes in a semi-final that went to a replay.

“Armagh are very much together and have a lot of momentum built up,” McGuinness said this week.

“They leave three or four players up in attack, but they also have a very good defensive system. They kicked 18 points on a very bad night and they forced a lot of turnovers. They bring a lot to the table and they’ll be very hungry.

“We also need to bring a lot to the table. Armagh will present a huge challenge to us.”

McGuinness has kept a tight lid on Donegal’s preparations without the use of the old siege mentality approach adopted by Paul Grimley and Kieran McGeeney.

As Armagh continue their squabble with the media, McGuinness and Donegal have kept a low-key approach, as has been the norm for their quarter-finals. This will be their fourth quarter-final in a row under McGuinness’s watch, with wins over Kildare (2011) and Kerry (2012) followed by last year’s harrowing hammering at the hands of Mayo.

“We lost our All-Ireland title that day and there’s no doubt it was painful. More so, it hurt because we went out of the Championship. That was a tough dressing room last year. We’re back at that same stage now so hopefully we can get a performance that will get us what we want this weekend.

“All’s good and we’re looking forward to the game now. Everyone is 100 per cent.

“This is where you want to be. We’re very much looking forward to getting in there. We’ve refocused very well since the Ulster final. That refocus came on very quickly so we’re happy with where we are. It is a good position to be in.

“It’s knockout football and there’s no safety net now. Championship football and against Armagh in Croke Park, you have to look forward to these occasions and these games.  We’re hoping, as we always are, for a performance that will get us over the line and into another game.”

All eyes will again be on McGuinness’s selection come five minutes to four on Saturday. Whatever team will be named is likely to be ever so slightly tweaked by the time Joe McQuillan throws the ball in.

The Cavan man – the GAA have gone for an Ulster man to officiate this all-Ulster battle – is expected to fire the O’Neills in the air with Neil Gallagher stationed nearby. The Glenswilly man had to come off in the Ulster semi-final against Antrim after only sixteen minutes, but he had a massive game against Monaghan in the final and is likely to get the nod again.

McGuinness said: “The thing about Neil is that he needs to be fit and injury free. He’s getting a run at it now and he’s a very important player for us.”
Rory Kavanagh hasn’t started in the Championship this year yet, but the St Eunan’s man also comes into the frame and it will be interesting to see whether McGuinness goes for Darach O’Connor or Patrick McBrearty inside.

McBrearty came on for O’Connor in the first half of the Ulster final and kicked three wonderful points.

The Kilcar man’s performance was a reminder of the talents he possesses and it was a real statement of intent. He turned 21 this week, but this is his fourth Championship campaign. He will have a big say this autumn. Coming off the bench in the League, McBrearty made big impacts against Laois, Galway and Monaghan, but also against Armagh on the final day when he scored two points as a sub at the Athletic Grounds.

“I suppose something that got lost in the euphoria of it all in Clones is that Patrick wasn’t dropped,” McGuinness pointed out this week. 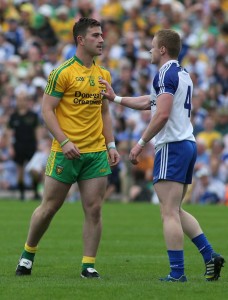 Patrick Mc Brearty stands his ground as Colin Walshe welcomes him to the game.

“That was very much a tactical switch we made. It was something that had worked well during the League at certain stages. We knew Monaghan would bring a lot of physicality to the game and we thought that when it would open up that Patrick would have a big impact. That was the context of the decision and that’s how it worked.

“We have no such thing as a ‘first fifteen’ because every day is a different opponent that requires a different approach. You’ll have the fifteen who start the match but it’s not a cliché anymore to say that it’s a 21-man game. It is all about the squad now and every single match has shown us that.

“Everyone is pushing very hard in training. Everyone wants to play and everyone is itching to be a part of it. That’s what you want. The subs won the game for us in Clones I feel. They were excellent.”

O’Connor had a tough time of it against Monaghan, but McGuinness believes the diminutive Buncrana man could relish the vast expanses of the Jones’ Road’s fabled Gaelic games coliseum.

McGuinness said: “’Jigger’ damaged his hamstring, as did Colm (McFadden), ten or twelve days before the game. It looked like he just wasn’t fully right, but he’s been going well since. The experience of that Ulster final will really stand to him though.”

The Donegal boss again has a full panel from which to choose his men for the battle – a far cry from last year when patched up Donegal headed for a Mayo ambush on the August Bank Holiday weekend.

“It’s great now not to have those problems,” McGuinness said of the health of his panel.

Armagh have doubts over the fitness of captain Ciaran McKeever, who was on crutches for their win over Meath on Saturday evening.

The Orchard are one of only two Ulster teams McGuinness hasn’t faced in the Championship. Donegal defeated them twice this year, in the McKenna Cup and in the League, both times in Armagh.

Between 1999 and 2006, Donegal endured almost annual suffering against Armagh.

“Maybe you could say it’s a chance to right some of those wrongs, but that isn’t on my radar at all,” McGuinness said.

“It’s a game of football that we’ll approach like any other. We will have the same approach as we always do and for us it’s about trying to get the performance right first and foremost.  That doesn’t change because it’s against Armagh or because it’s Croke Park. That stays the same, all the time.”

Donegal are Ulster kings for the third time in his four years, but the Anglo-Celt has been parked on the sideboard and McGuinness is again eyeing a tilt at the big one.

The Donegal manager said: “You do take confidence from being Ulster champions, but that won’t win the game for us the next game. What will win the game for us is effort, work and commitment – those things will get us over the line. Those are the things we look for in every game at every time of the year and now is no different.”

Armagh have been improving steadily and have six Championship games under their belt already. While they will present a number of tough tests for Donegal, it is a game that Donegal are rightly the favourites for. With a clean bill of health and an in-form squad Donegal are well capable of leaping the hurdle. The most encouraging thing is that there is even more to come from them than they showed in an excellent Ulster final display against Monaghan.
Donegal have the capabilities to pull away on the home straight in this one.