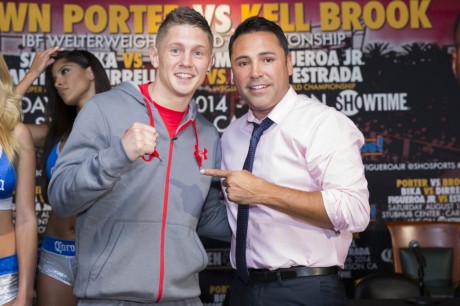 The 23-year-old has had an unblemished start to his professional career, with two knockout wins against Howard Reece and Fernando Najera.

The Ballybofey man signed a five-year deal at De La Hoya’s Golden Boy Promotions earlier this year. Quigley is based in Los Angeles and has been earmarked for the top by De La Hoya.

A ten-time world champion across six weight divisions, De La Hoya has already predicted big things of Quigley, who followed up an 82-second stoppage of Reece in his Las Vegas debut by defeating Najera in the StubHub Center, Carson, two weeks ago. Najera’s corner retired their man after three rounds, ensuring the perfect start continued for the Finn Valley man.

“Jason looked amazing in his fight against Najera, and we’re very pleased with his progress,” De La Hoya told the Donegal News.

“You can tell immediately that he’s someone who knows the game, and his amateur background is serving him well as a professional. We will keep him busy and move him the right way, and I have no doubt that he will be a world champion one day.

“I became aware three years ago. He’s a good kid, he’s hungry, he’s a hard worker. What really stands out is his ability to want to be a great boxer inside the ring. If you can fight, if you can demonstrate to the fans that you want to put on a great show and fight to the last second of the last round then you are the whole package – Jason is the whole package.”

Quigley pummeled Najera, a Mexican, who showed superb resistance in the face of an aggressive challenge by the Finn Valley man, who was in control for the duration.

After a standout amateur year in 2013, when he won senior Irish and European titles before going on to claim a silver medal at the World Championships, was snapped up by De La Hoya. Quigley had previously boxed in the WSB with the LA Matadors and his style was something that appealed to the Golden Boy stable.

De La Hoya has big things planned for Quigley, who spent some time in LA before signing. His father and coach, Conor, is also based Stateside where he is still in the corner.

De La Hoya said: “The team you have now is the team you should have until the end of your career – and Quigley has a great team around him. He has his father there in his corner and he wants what is best for his son.

“We have seen fighters who are special, in their 10th, 11th or 12th fought throwing it all away because they start getting the entourage around them, people who say ‘yes’ to every single thing.

“He must keep the same humility until the end of his career. That will keep him hungry, motivated and working hard. My philosophy has always been: ‘the day you think you can stop learning is the day you can retire.’ Keeping the humble spirit fuels the fighting spirit.”

De La Hoya had a brief reign as middleweight king himself, getting a fortunate decision against Felix Sturm in 2004 only to be KO’d by Bernard Hopkins in his first defence.

When Quigley walked into De La Hoya’s office, the Golden Boy’s belts were all on display in a cabinet, including that one middleweight belt. ‘You’ll help me to fill that space,’ De La Hoya told Quigley.

The Ballybofey man said: “If was unbelievable to hear that from him and there is definitely a goal in my head now.”

Quigley’s bout against Najera was television as part of the undercard to the Shawn Porter-Kell Brook IBF welterweight title showdown on ShoBox Extreme and fans back in Donegal were able to catch the footage online. However, De La Hoya says Quigley will one day get back to these shores to headline a show.

He said: “Ireland is a massive fight town and we feel that it’s important to take him back there. Maybe when he’s 10-0 or 12-0 we’ll get him there. We will take his career one fight at a time.”