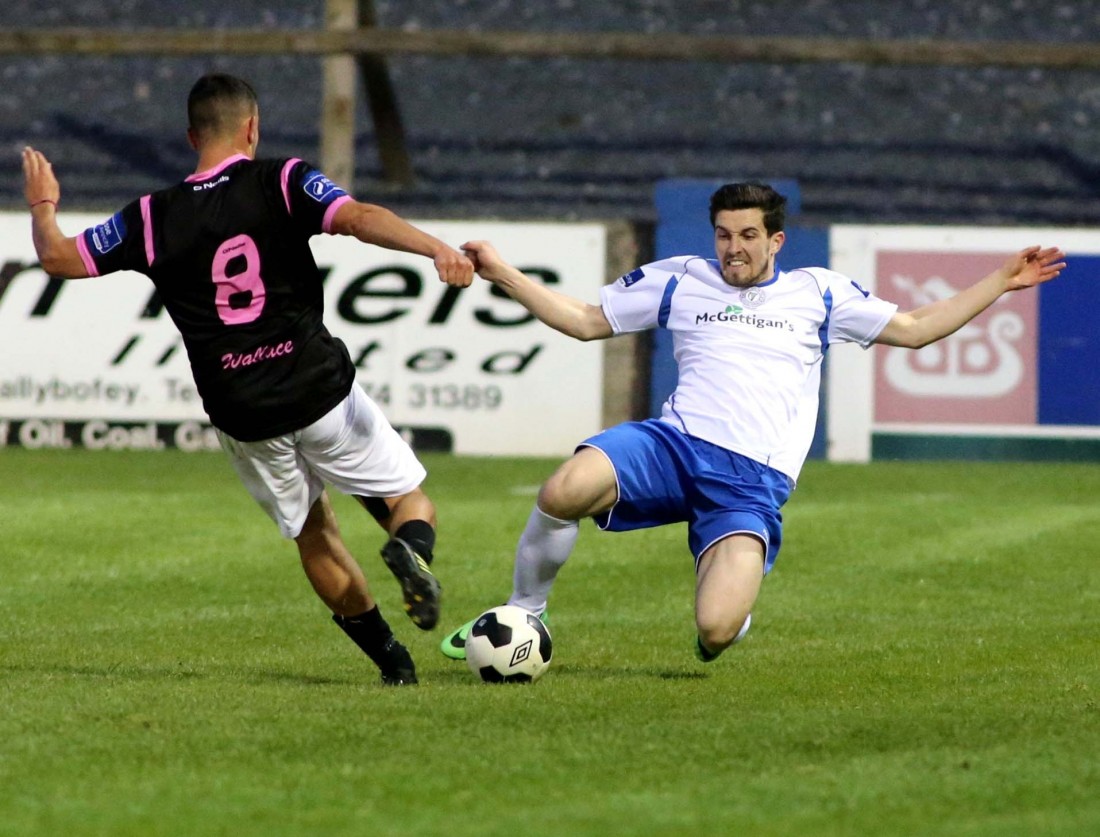 Brian McGroary announces his arrival on Finnside with this important tackle on Shane Dunne of Wexford Youths. The Drimarone native made his first Finn Park appearance for Ollie Horgan’s Harps as a sub last week.
Photo: Gary Foy

OLLIE Horgan has vowed that Finn Harps will fight to the bitter end this season.

Despite last Friday’s two-all draw against Wexford Youths blowing the candle out on their flickering hopes of staying in contention with the promotion-chasing pack, Horgan insists that his men will strive to finish the season in the best possible position.

Harps head for First Division leaders and the title favourites, Longford Town, on Saturday night (City Calling Stadium, kick-off 7.30pm), on the back of a decent run of games but, ultimately, the failure to turn any of their ten draws into wins has proven costly.

The Donegal side sits in fifth position, but have Waterford United just three behind them. Last season, Harps ammassed 31 points to finish in sixth place, but that tally is certainly beatable for the class of now, although they’d do well now to reel in the five-point gap to Wexford Youths, the fourth-placed side.

“If we were to finish ahead of Wexford it would be an unbelievable achievement,” Horgan said.

“We want to finish as high as possible in the table. We know Waterford are breathing on our necks, but so be it – we’ll keep going.

“The big thing for us was keeping in touch with the top three, but that’s fading now; there’s no doubt about that.

“There is still a buzz there and I can feel that in training which is good and which is positive. We won’t throw the towel in, I’ll guarantee you that.

“Everyone here is breaking their backside. We have our limitations and we know that, but everyone is giving it their all and no-one here is making any money out of it.

“We’re doing it as professionally as we can and we will do that right until the last game of the season.”

Saturday’s trip to the midlands sees the season reach its three-quarter mark for Harps, who are without the suspended Caoimhin Bonner, sent off late in last week’s draw. With it being the Derryman’s second sending off and his third suspension of the season he is anxiously awaiting the next bulletin from the FAI’s disciplinary controls unit, who are expected to slap a severe sanction on the tough-tackling defender.

Harps made representation on Tuesday in a bid to lessen the heaviness of the punishment.

Horgan will have a headache next week when he takes his team to Waterford United. With Bonner certain to be sidelined, Harps are also without Packie Mailey and Damien McNulty, who have crossed the line on yellow cards accumulated while Kevin McHugh must avoid picking up a booking or he could miss the forthcoming FAI Cup clash at Wexford Youths.

McHugh sat out training with a back injury on Monday night, but is expected to be fit to play this weekend, as is the goalkeeper, Conor Winn, who has been hampered by a knee injury lately.

Pat McCann has resumed light training as he continues to feel the effects of a toe injury.

Horgan said of the American midfielder: “I want to make sure Pat is 100 per cent. He played for a few weeks while it was troubling him and he hasn’t been at full pelt because of it. He had last week off, but we still want to make sure that he has fully recovered before we get him back.”

Confirmation this week of Tommy Bonnar’s departure from the club further reduces what was a small squad to begin with. Given the departures of Bonnar, Jonny Bonner, Mark Forker, James Doherty and Paul McVeigh, Horgan has had his squad significantly trimmed.

He mentioned: “It seems impossible to keep a panel of more than twenty players happy. I was up to around twenty-two at one stage. When players then don’t make the eighteen-man squad it’s a huge disappointment.

Longford are six points clear of Shelbourne at the summit and look odds on to win the Division. Unbeaten in their last twelve League outings, Tony Cousins’ team have won their last eight on the spin.

Horgan said: “Longford are on a serious run of form. We know what they have and we know what they’re about. David O’Sullivan has scored nineteen League goals this season – we can’t compare of compete with that. You look at Pat Sullivan, Stephen Rice…these guys are so experienced. They’ve played in Europe. I watched them a couple of weeks ago and thought Don Cowan look very good too – he had serious pace and power.”

In April, O’Sullivan netted a penalty in a 1-0 win over Harps in Longford while in the previous meeting at Ballybofey Glen O’Connor’s 85th minute free-kick handed Longford another 1-0 win on a night when Harps failed to create a clear-cut opening.

Horgan said: “They don’t give up many chances. We have played them twice and lost each time one-nil, but I don’t think we had a clear-cut chance in either game. Longford will be a savage battle for us.”