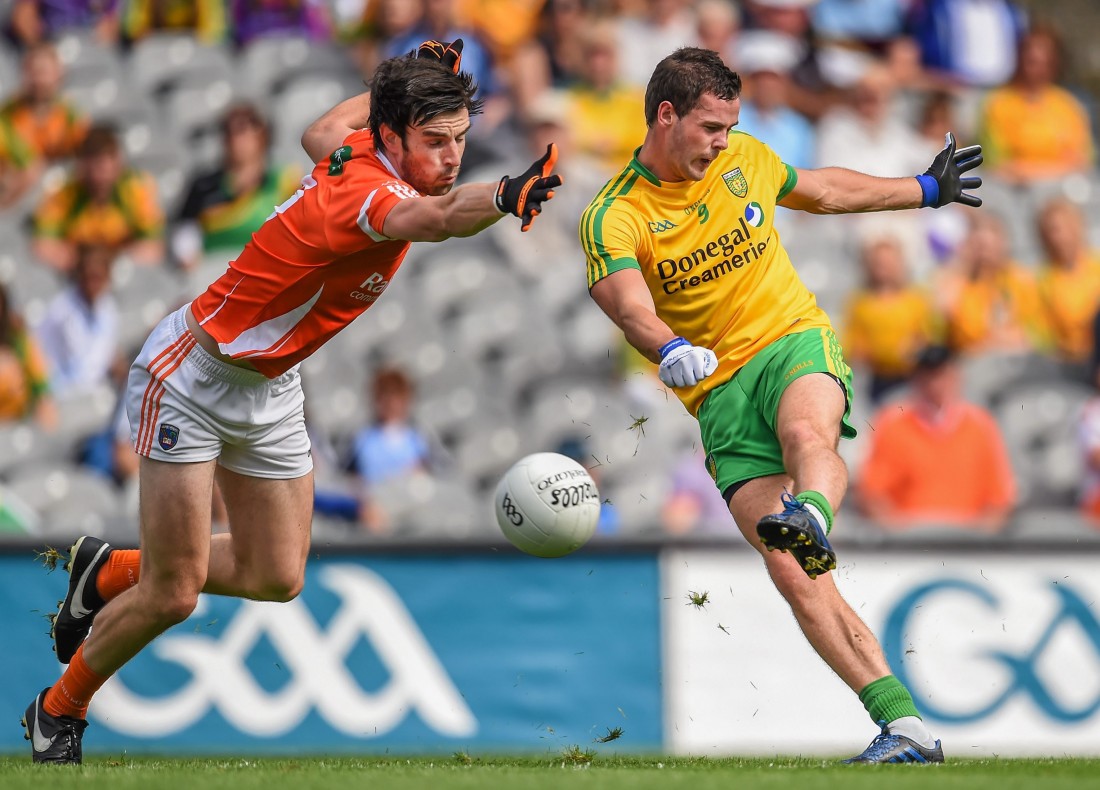 THE bloodlines always decreed that Odhrán MacNiallais was destined for big things.

The Gaoth Dobhair man has been a mainstay in the Donegal team this year and has played every game in the McKenna Cup, National League and Championship.

His goal against Armagh in the recent All-Ireland quarter-final showed the predatory instincts of a player marked out by Eamon McGee as ‘one to watch’ long before he came to prominence on the national stage. McGee reckoned MacNiallais was ‘one of the most naturally talented footballers there is’. His words were prophetic.

He’s been the find of the season by Jim McGuinness with a four-point haul against Antrim and the goal against Armagh – to go alongside a fine goal against Monaghan in the League – the standout moments.

Post-Armagh, McGuinness said: “It was a fantastic finish by Odhrán and he’s really stepping up to the plate. That goal was a very important moment in the game for us. It gave us a chance to build some momentum.”

MacNiallais’s emergence is no accident. He comes from thick Gaoth Dobhair football stock.

His grandmother, Margaret Mellett, is a sister of the late, great Hughie Tim Boyle.

Donegal minor defender Cian Mulligan – who’ll also line out at Croke Park on Sunday in the minor semi-final – is cut from the same cloth. His grandmother, Teresa McGeady, is Margaret Mellett’s twin sister.

Another sister, Sarah, was the mother of European Cup winner and former Celtic, Manchester United and Scotland player Paddy Crerand, who retains a keen interest in the affairs of the Gaelic footballers of Gaoth Dobhair.

It is a mark of his standing that Hughie Tim needs no mention of his surname to be known. A winner of seven Donegal SFC medals with Gaoth Dobhair, he played for Donegal between 1945 and 1955.

His inter county championship debut was against Cavan in 1946, fielded at right corner back where he would be named on the Donegal Team of the Century.

The disappointment was that his talents couldn’t regularly grace Croke Park, as those of his grand-nephew MacNiallais are now.
MacNiallais’s father, Donnchadh, played for Gaoth Dobhair in their 1977 championship final defeat to Sean MacCumhaills while still a minor and was on the panel the following year when they were beaten by Naomh Columba.

Donnchadh’s attentions turned to soccer with Gweedore Celtic and he had a fine soccer career.

When Gaoth Dobhair were giving the kiss of life to the club’s Bord na nOg, Donnchadh got involved alongside Tom ‘Beag’ Gillespie and Brendan Boyle.

As MacNiallais runs out from the Hogan Stand on Sunday, it ensures the legend and legacy of Hughie Tim lives on.