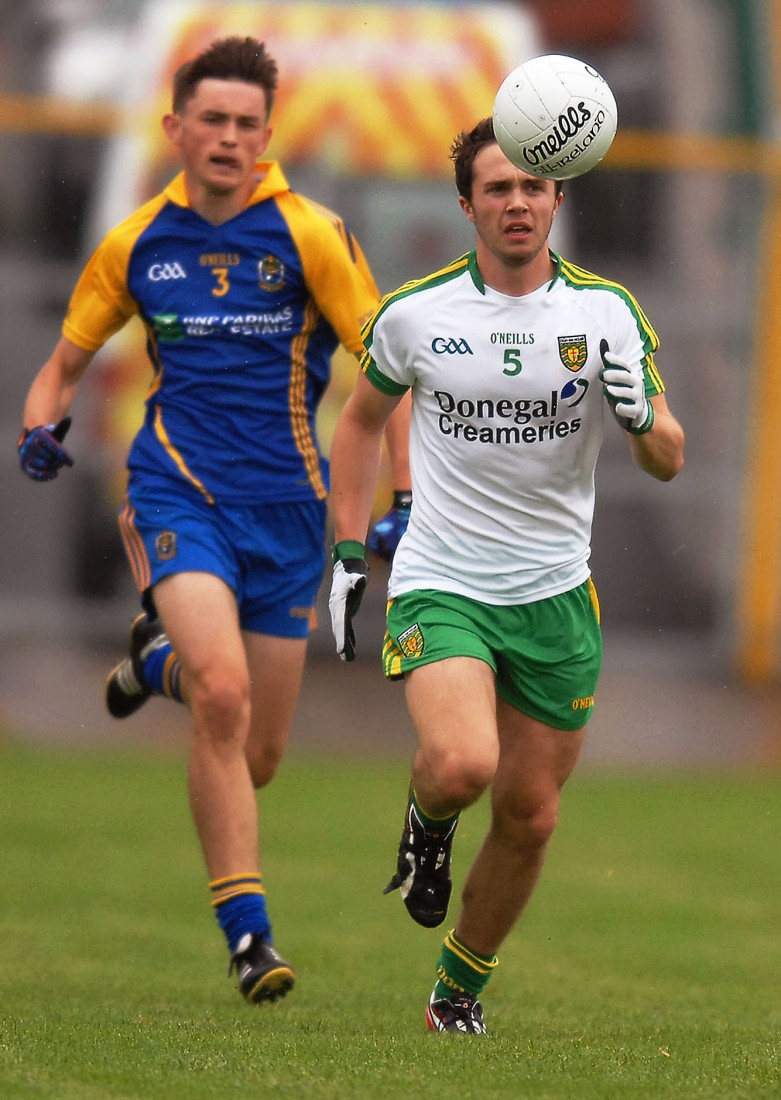 The outstanding Cian Mulligan, coming forward for Donegal, with Roscommons Brian Stack in his slipstream.

DONEGAL’S minors had been billed as clear favourites for Saturday’s All-Ireland quarter-final against Roscommon having romped to the Ulster title, but ace wing-back Cian Mulligan insisted that external voices never entered their heads.

Mulligan cracked over four points to drive Donegal to a heart-stopping two-point win over Roscommon, who lost the Connacht final against Mayo.
The Gaoth Dobhair man was Donegal’s Man of the Match having had a huge influence on the win, earned in difficult conditions in Sligo.

Since the Ulster final, all the talk was of the All-Ireland semi-final, dismissive of Roscommon’s chances, but Fergal O’Donnell’s side made Donegal earn their crust with a disciplined and composed performance and a fascinating defensive set up.

“There was pressure alright, but we’ve done a lot of mental work and Declan makes sure we keep cool heads,” Mulligan said.

“We don’t listen to anyone from outside the camp. We knew this was going to be a tough game.

“We’re delighted to get over the line. The boys worked hard out there. It wasn’t easy in that weather. The conditions were sloppy and the ball was greasy. We trained in that weather all year so we have been used to that.”

Donegal had to be patient and were sometimes frustrated against Roscommon’s brick wall.

Mulligan said: “They had a clear gameplan from they came here. They had it well rehearsed too. You could see how they lined up on the ’45 and their midfielders were just breaking the ball. They did it well, but we’re used to playing against that in training. We expected them to play like that and we’ve put in a lot of work ourselves.”

Mulligan opened Donegal’s account in the fourth minute, steering over after collecting a pass from Tony McClenaghan and in the 20th minute he polished off a well-worked Tír Chonaill move before adding two more in the second half.

The modest wing-back said: “I had the shooting boots on. I don’t usually have them on, but thankfully the ones I hit there went over the bar.”

Late in the day, Donegal lived on the edge, but with Mulligan getting a telling hand to an Evan McGrath effort the Donegal support could remove their fingers from their faces.

Mulligan said: “I got a wee block on it alight. Every man was throwing their body at the ball in the last few seconds to keep the goal out. Thankfully we got enough pressure on him and got the block in to keep it out.

“It would have been cruel to lose it like that, but everyone put the body on the line to keep them out. If we hadn’t, we’d have been out.

“There was a good crowd there today and it’s great to get the support out for us. Hopefully the seniors win their match and we can have a big Donegal day at Croke Park.”

Mulligan was joined in the starting line-up by Gaoth Dobhair club-mates Michael Carroll and Ciarán Gillespie. Gavin McBride and Niall Friel were on the bench, while Gary McFadden is also on the squad. Were the Donegal seniors to defeat Armagh on Saturday the Donegal double header in a semi-final would be a massive day for the Gaoth Dobhair club with Eamon and Neil McGee and Odhrán MacNiallais members of Jim McGuinness’s senior panel.

Mulligan said: “It’s great for the club. The hard work has been done through the years by the likes of Tom Beag (Gillespie). He’s worked hard with us since under-12s. We’ll be well represented with the three boys in the senior team too; hopefully they’ll get over the line in their game next weekend.”