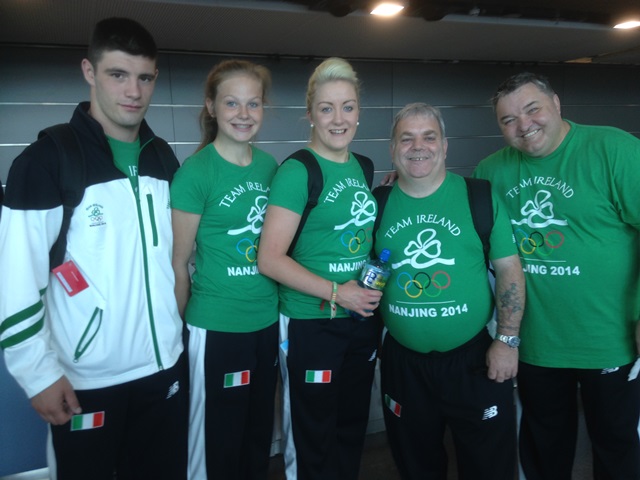 MICHAEL Gallagher moved into the semi-finals of the heavyweight division at the 2014 Youth Olympic Games in Nanjing, China after defeating Maksim Kazlou from Belarus.

Ten-time Irish champion Gallagher, who booked his place at the Games through a box-off at the World Youth Championships in Sofia, now faces World gold medalist Yordan Hernandez of Cuba in the semi-final.

His win over Kazlou was as comfortable as the judges’ scorecards suggest, Gallagher given all three rounds by Italian Maria Rizzardo and Denmark’s Claus Bedemann. While Vietnam’s Trong Nghia Vuong gave Kazlou the edge in the first round, he too sided with Gallagher for the second and third stanzas, meaning a 30-27, 29-28, 30-27 win for the Kinletter man.

“It was a good performance from Michael against an opponent that never stopped coming forward,” said Stephen Connolly, the Irish boxing team manager in Nanjing.

“We have three in semi-final action now tomorrow and fingers crossed we can get to the finals.”

Gallagher is joined in semi-final action by Cork’s Christian Desmond and Mayo’s Ciara Ginty. Ginty, the first Irish woman to box at the Youth Olympics defeated Italian Monica Floridia in the lightweight division, while middleweight Desmond was given a bye into Sunday’s semi-finals.

Gallagher is up against Hernandez, who defeated him in a quarter-final in Sofia earlier this year.

Connolly added: “Michael said after today’s contest that his opponent was tougher than the Cuban lad that beat him at the World Youth Championships.”