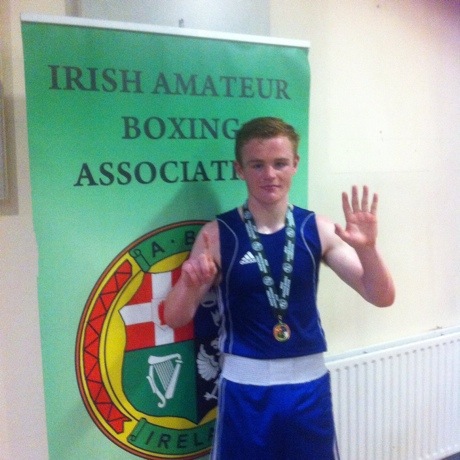 BRETT McGinty will head for his third European Championships in late October and the St Johnston man is aiming to get back among the medals.

The Oakleaf ABC boxer won his sixth national title last Friday night thanks to a late flurry that saw off Kevin Kehoe of Marble City BC in Kilkenny. Hot on the heels of that triumph McGinty quickly turned his mind to the trip to the Russian city of Anapa later in the year.

“I came here to win a Irish Cadet title, but even more than anything I wanted to book my place on the plane for the third time,” McGinty said.

“I’ve been in Anapa twice before at Europeans. This will be number three and this time I plan to do big stuff.”

The European Junior Championships will be the 15-year-old’s third trek to the Krasnodar Krai region of Russia.

He has previous on the podium having won a bronze medal at the 2012 European Schoolboy Championships at the Kubanskaya Niva venue.

There, he defeated Israel’s Michael Katz (16-7) and Gurgen Madoyan of Armenia (19-12) to win bronze. The luck of the draw saw him pitted with home fighter Havazh Mutsolgov and the Russian was the 10-6 winner on points.

Last year, despite being a year young for the event, McGinty headed for Anapa for the Youth and Junior Championships. In defeat against Belarus representative Sava Parshayev, he showed enough to outline his talents.

Last Friday McGinty pulled out the stops late in the day to overcome Kehoe and put himself back on the continent again.

“He’s got the experience now which is massive for him,” said Oakleaf ABC coach Eugene O’Kane.

“He’s going to Russia and he’ll be looking for a medal.”

McGinty had put the disappointment of losing to Christopher O’Reilly in the Youth final behind him with wins over Leon Gallagher (Finn Valley) and Jimmy O’Reilly (Portlaoise) to make his way back to a final, where he again had his hand hoisted in victory.