Advertisement
HomeSportBoxingJason Quigley: Making America aware on the road to the dream
Advertisement 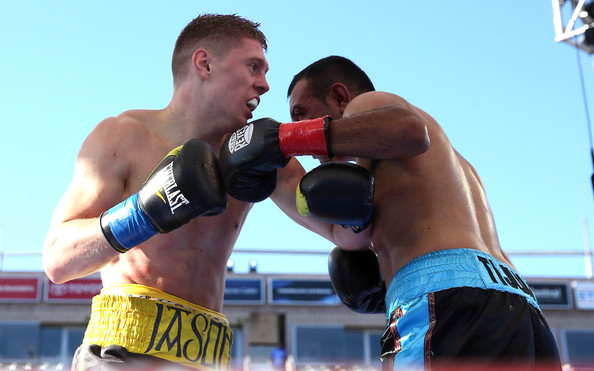 Jason Quigley gets stuck in against Fernando Najera last Saturday in Carson.

IN the boiling American Express Stadium Room at the StubHub Center in Carson, California last Thursday, Oscar De La Hoya sat behind the top table at a press conference to unveil the line-up for a fight card two days later that included the IBF welterweight title fight between Shawn Porter and Kell Brook.

The Golden Boy Promotions President introduced the boxers, one by one.

The headline acts, Porter and Brook, as well as WBC lightweight hopefuls Omar Figueroa and Daniel Estrada and the WBC super middleweight contenders Anthony Dirrell and Sakio Bika were each allowed time at the podium to offer their thoughts and set the scene for their respective contests. There were some cracking exchanges, particularly between Dirrell and Bika ahead of their rematch.

De La Hoya quickly ran through the undercard, but it was notable that he momentarily broke his haste when it came to one boxer, ‘a terrific fighter’ whom he told the assembled boxing press corps was ‘really exciting’. In announcing a four-round middleweight bout, De La Hoya peeked over his right shoulder and asked Jason Quigley to take the stand.

“Stand up, Jason, so these people can all see you for a moment,” De La Hoya beckoned the Ballybofey man.

There were twenty-four fighters on the card. Leaving aside the six jousting for world titles, it was also a night that would include an Olympic gold medalist in the form of England’s Luke Campbell – who beat John Joe Nevin in the bantamweight final at London 2012 – and others with much more experience than Quigley’s sole professional bout, the 82-second stoppage of Howard Reece in Las Vegas on July 12.

But, ahead of Quigley’s meeting with Mexican Fernando Najera, there was a pointed reminder that De La Hoya believes that Quigley is one to watch. It was the former ten-time world champion’s way of telling the American press to keep an eye on the ‘Fighting Irishman’ who, even at this stage of his career, is clearly no ordinary undercard man.

It is the 23-year-old’s intention to live up to a lofty reputation, built over years of graft as a schoolboy, youth and senior amateur boxer and cemented by a stellar 2013 that saw Irish and European senior titles, as well as a World silver medal, won by the Finn Valley ABC star. By last winter, Golden Boy had come calling, but the Quigley camp took their time to assess the fine print on any negotiations.

Jason made a preliminary visit to Los Angeles earlier in the year with his father and coach, Conor, to assess the surroundings before they committed to signing for De La Hoya’s stellar stable.

Ahead of his debut in July, Jason stated: “I’m here to let the American people know who Jason Quigley is.”

America is being made aware of just who the fresh-faced young Irishman is.

As Peter O’Donnell, the President of the Donegal Boxing Board, put it: “Anyone who doesn’t know him wants to get to know him.”

Seeing is still believing, even in these days of floods of coverage on social media. To see the reaction of the public in California to Quigley is remarkable.

Led by a strong promotional team in his experienced management company, Sheer Sports and PR expert Rachel Charles, who have managed Quigley’s image to perfection. A meet-and-greet at the StubHub Center, home to LA Galaxy, the week before his fight, went down a treat with the natives. After his fight on Saturday, a lengthy queue began to form. The Mexicans, in particular, are fond of Quigley. Everyone wants a slice. The Mexicans love their boxing and in Quigley they have an on-the-rise man who is everything they love about the sport.

Small pockets of tricolours dotted around the arena, with a group including the former Derry City player John Cody, who was visiting his brother-in-law Robby Waddell in San Diego. “We’re all boxing enthusiasts and once we heard Jason Quigley was on we had to come up,” Cody said. San Diego to Carson took around three hours, but the chance to see Quigley in the flesh was worth it.

When it came to the crunch – a little later than anticipated because of a change to the running order of the bouts – the stylish Quigley didn’t disappoint.

The StubHub has been the venue for some modern day boxing classics, like the meeting of Timothy Bradley Jnr and Ruslan Provodnikov (the 2013 fight of the year), Brandon Rios v Mike Alvarado I, Erislandy Lara v Alfredo Angulo, Marcos Maidana v Josesito Lopez (on the same card in June 2013) and Paul Williams v Antonio Margarito.

To be on a card including a trio of world title bouts on the occasion of his own second pro fight was quite the coup for Quigley, a debutant at the MGM Grand in Vegas some weeks previously. Saturday was also his first time televised in America, another rarity so early in a career.

Quigley did the job nicely. 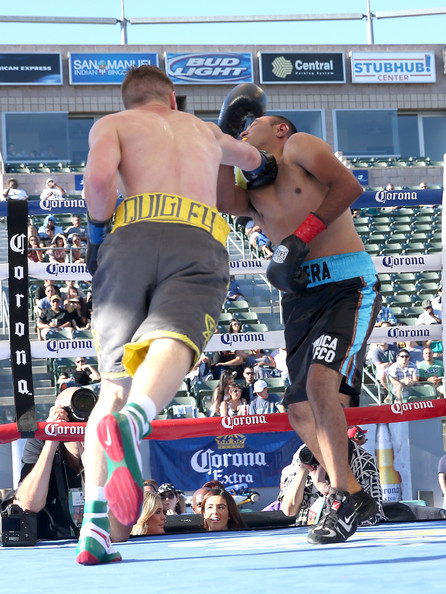 Jason Quigley lands a decisive blow to Fernando Najera at The StubHub Center.

Najera’s record wasn’t all that impressive, although he came in on a high following a win over American Jonathan Jackson two weeks ago, while he went the distance with former Olympic bronze medalist Yamaguchi Falcao only to lose on points back in April.

Najera showed a jaw of steel to keep taking punishment from Quigley, who pummelled his chin for the duration of three gruelling rounds. Once Quigley settled, he looked in comfort of his situation.

A slambanging third round, which included a brutal exchange of punches in ring centre, got the crowd on their feet.

By then, Quigley smelt blood.

A check to the left eye of Najera confirmed a cut. Quigley opened him with a ferocious right-left-right combination that rocked the 27-year old. Najera went to round’s end, but the Mexican didn’t answer the bell for the fourth round. His corner decreed that he’d taken enough and informed the referee, Ray Corona, that they were retiring their man.

For Quigley, the best thing of the night was perhaps in getting three rounds under his arm. Before the tv cameras and in front of a growing crowd, it was experience that will stand to him in the long run.

He said: “I’ve put in all the hard work in the gym and in sparring. I’ll be ready for six rounds, eight rounds, ten rounds and twelve rounds when they come. I’m always 110 per cent ready and focussed to go the distance at any time.”

The understanding between coach and boxer, father and son, and the importance of that relationship was also outlined by Quigley.

“In the corner you can have a trainer or a coach that has been there for years, but once it’s blood it is a lot thicker,” he said last week.

“A lot of boxers have trainers, but I’ve got blood – of course that means a lot more. Getting into the ring I never have a doubt about the corner. I know I’m going in 110 per cent focussed and if I need anything at all my father is on the ropes.”

Jimmy Lennon Jnr, the ringside announcer, introduced ‘the man hailing from Ballybofey, Donegal, Ireland’ and it was a moment that brought a lump to the throat of those of us who’ve chronicled the trajectory in his career from the Finn Valley Centre to the National Stadium and now to Tinseltown.

Golden Boy Promotions and Sheer Sports are keen for the American public to be aware of Jason Quigley and the boxer himself is at home under the bright lights. Eddie Hearn of Matchroom Promotions is another who is sure to have taken a mental note of Quigley last week and the impact he has.

Guided carefully by his father’s light, Jason Quigley will keep taking the small steps. The record now officially reads 2-0-0, 2KOs. It’s just what he wanted and another fight is likely to be fitted in this side of Christmas. Another step on the road to the ultimate goal. In October 2006, the fifteen-year-old Jason Quigley told this writer: “I want to get to the top…I want to be the best boxer in my weight.” 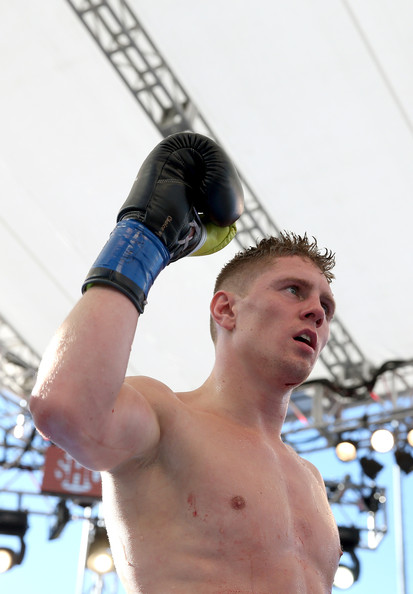 Jason Quigley after his win over Fernando Najera