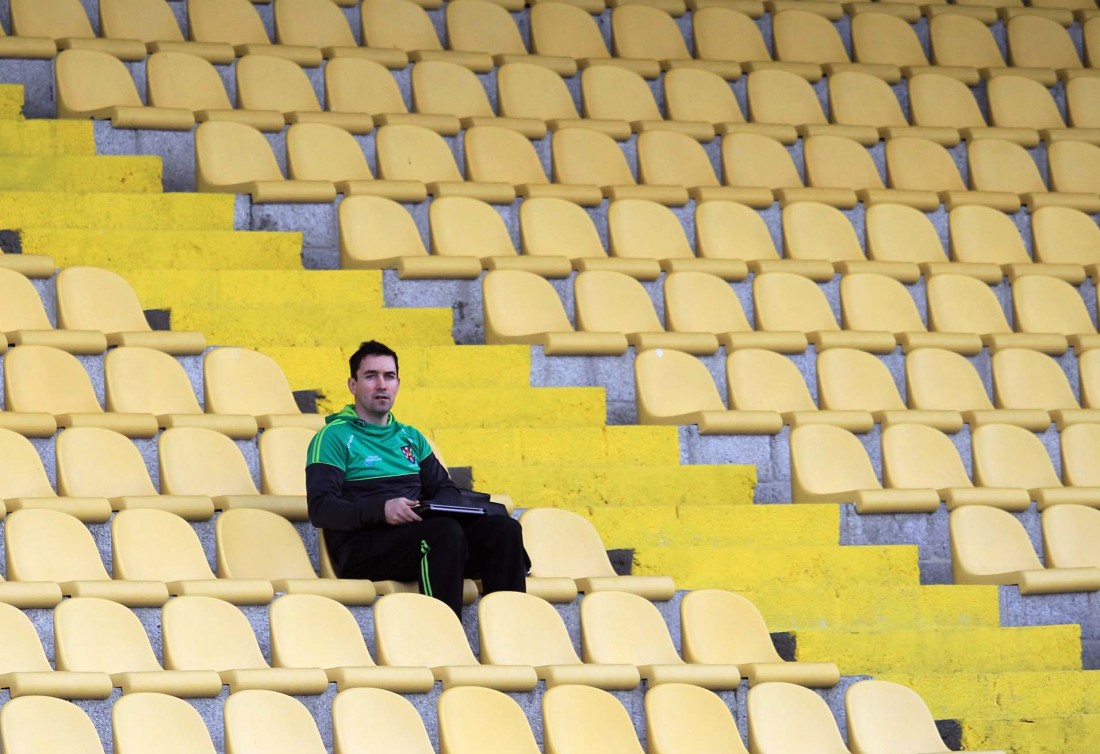 ANTHONY McGrath is playing an integral role in the success of the Donegal minors – in the role of the squad’s sports psychologist.

The Ballyshannon man, who won Ulster minor and Ulster under-21 titles with Donegal in the 1990s, was recruited by Declan Bonner to assist in the team’s mental preparation.

Employed by day as the domestic recruitment manager at Queen’s University, Belfast, McGrath has a Masters in Sports Psychology from UUJ and has been imparting his knowledge to the Donegal minors.

What started as a very peripheral role while the minors were on a training camp in Belfast last winter has evolved into McGrath now taking an active part in training and on matchdays.

“When the minor team came up at Christmas and did a training camp I did some of the psychology work with them and the next thing I was going into them one night a week,” he says.

“Before I knew it I was going to matches! Declan is a very passionate guy and I enjoy working with the group.

“A big part of the success of my work is that Declan is so open to it.”

So, what exactly is the role of the sports psychologist?

McGrath, a nephew of Donegal Children’s Officer Mick McGrath, says: “Essentially what I do is engage with the group to try and get a consistent mindset which is designed to try and ensure a consistent performance level.

“For a lot of them this would have been their first experience of engaging in this sort of work. This is the right age to start that development. The main objective is to establish a strong mental core.

“A lot of it is one-to-one. A lot of the progress has been made in the one-to-one stuff.”

Much of his passion for the mental preparation of teams and players is drawn from his own experiences.

Holder of three Donegal SFC winners medals with Aodh Ruadh from the 90s, McGrath is blunt when he assesses his own career.

“I look at myself as a failed footballer,” he says.

“Injury caught up with me and I dealt with that very poorly. With more and better mental preparation I could have dealt with it better.

“I stopped playing early, mainly because of injury, but with the correct preparation and stuff I wouldn’t have.

“When I played Sigerson with Queen’s we had a guy working with us, John Cramer, who did some work with Down and Tyrone. He’s an Englishman with no connections to the GAA at all. He had a massive influence, though.”

McGrath won an Ulster Minor title with Donegal in 1991, alongside the likes of Damian Diver, Declan Boyle and Mark Boyle.

He says: “I was only sixteen at the time. We were in awe of the senior boys like Declan (Bonner). We had a couple of great minor teams and the senior team was on a roll too. We came through together, won Ulster in 1991 and came back with practically the same team in ’92. We lost that year to Armagh and a lot of their boys went on to win senior All-Ireland medals.”

You might think the concept of sports psychology to be new to Donegal minor teams but, as McGrath outlines, it was very much part and parcel of the preparation of those minor teams, managed by the late Sean Ward from Dungloe.

“Sean had Eamon Harvey on board and he brought a lot to the party. He was the first man I experienced doing visualisation with a group of footballers.

“That was in the early 90s; stuff like that was unheard of.

“Eamon was very innovative and I think he was a massive loss to Donegal GAA.  He brought so many new techniques to us. A lot of guys from that time would put him down as a man they learned a lot from.

“We were a close-knit bunch, very much like the current crop of minors.

PJ Buggy from Ballyshannon was instrumental in starting the county Under-16 team. We got to a Ted Webb final at that time and we were improving all the time. Everything was based on the amount of work we had done and we had good success for a while.”

Under Donal Reid’s management, McGrath – on a team that included Diver, Martin Coll, Adrian Sweeney, James Ruane and Brian Roper – won an Ulster Under-21 Championship against Cavan in 1995.

While there were formative introductions for Donegal football to some of the methods he still uses, McGrath sees a massive difference in the background of teams now.

He says: “It has moved on so much, there’s no doubt about that. You look at video analysis, sports science and even sports psychology as a concept.”

The GAA is amateur in everything but name these days. McGrath realised that while on a visit to Nottingham Forest, whose first-team squad included Ireland internationals Andy Reid and Simon Cox.

He says: “I spent some time over at Forest to see what was happening there. I came back and could easily say that GAA teams were as well prepared.

“It surprised me the level of preparation actually. You had players on huge sums of money who wouldn’t have had anything near the same level of commitment as the GAA players.”

McGrath is the manager of the Queen’s Sigerson team and had hoped to have had Michael Murphy’s services last year before the Donegal captain opted against starting a Masters in the Belfast college.

McGrath had a masterplan.

He says: “A part of the thinking was that there could maybe be a link between Queen’s and Donegal. You never know what might happen in the future.”

He does some occasional work with clubs around Ulster, but his top priority these days is his work with the Donegal minors.

He says: “The passions for me are in Donegal football. That’s very hard to explain to people. It’s just in the blood.”

Making the commute from Belfast to Donegal gets a little easier when you’re onto a successful group.

Winning the Ulster Minor Championship as a member of the backroom team meant every bit as much as his triumph in 1991.

He says: “It lifts a whole county. I live away from Donegal and you do find it hard to explain. But like last weekend you walk a bit taller. It’s just something that’s there, in you. If you’ve grown up with it like I have you can’t be any other way.”

As he prepares to get to work with the group ahead of an All-Ireland quarter-final meeting with Roscommon this weekend, McGrath is unflinching in his belief for the class of 2014.

He says: “When I first met this group in January they struck me as being a really mature group of players. That view hasn’t changed. There is no reason they can’t be successful.”