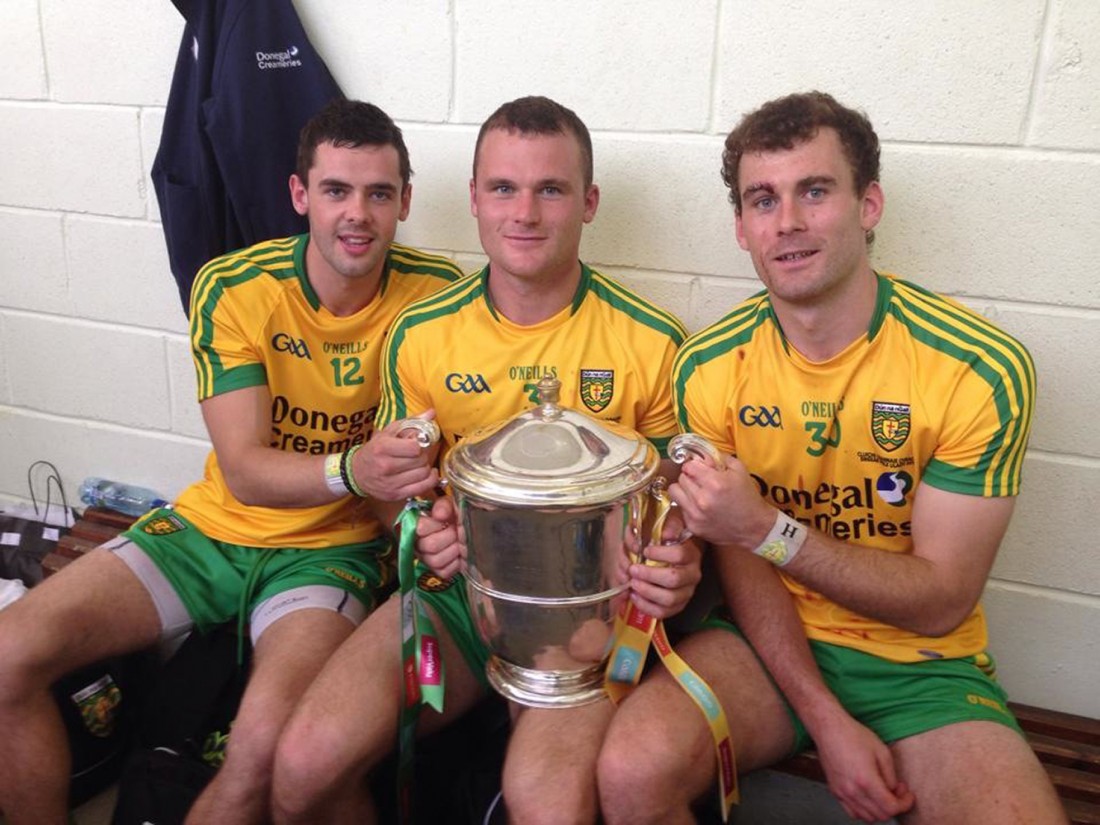 HUGHIE Tim Boyle, that great Gaoth Dobhair and Donegal warrior, recounted his footballing memories to Cormac McGill for an edition of the Hogan Stand GAA magazine in the summer of 1993.

Gaoth Dobhair, the footballing aristocrats of Donegal, at the time twelve times winners of the Dr Maguire, had watched the previous September as Donegal won Sam Maguire without the presence of a representative nurtured in Magheragallon.

Hughie Tim played in a golden period in Gaoth Dobhair, winning seven Donegal SFC medals, and was widely regarded as the greatest of his or any generation. He talked to McGill about the ‘spirit’ and ‘heart’ that prevailed out west in those days when Gaoth Dobhair were lords and masters.

“Given that spirit Gaoth Dobhair can again be the team leading the county,” he said at the time.

This Sunday, no less than nine footballers cut from the tough stones of Bloody Foreland will be part of the Donegal senior and minor squads facing Dublin in the All-Ireland semi-finals. Eamon McGee, Neil McGee and Odhrán MacNiallais are key members of Jim McGuinness’s senior panel with a half-a-dozen from the west Donegal Gaeltacht included in Declan Bonner’s minor squad: Ciaran Gillespie, Cian Mulligan, Michael Carroll, Niall Friel, Gavin McBride and Gary McFadden.

“It’s amazing to think that we have nine Ulster medals back in Gaoth Dobhair in the one year,” says Jimmy Mhicí Gallagher, who has seen it all in his 85 years. “I remember us going twenty-three years without a man on the Donegal panel. From Neilly Gallagher played his last Championship game, the next Gaoth Dobhair man to play on the Donegal seniors was Martin Coll. There were great Donegal teams in between, but the club had no-one at that level.”

He can recount the stellar cast as if they were of the modern era.

The names roll easily off the tongue: Jackie Phaidí Óig, Hiúdaí Beag, Hughie Tim, Barney Coyle, Neilly Gallagher and Owenie McBride. Their names will always be written in the stars.

“I would say that the two McGee boys are as good, certainly as hard and tough, as we ever had in Gaoth Dobhair,” says Jimmy Mhicí.

Owenie McBride concurs.  “You talk about the big Gaoth Dobhair players, like Hughie Tim, Hiúdaí Beag and Jackie – well, the McGees are up there now with the greats,” he says.

Gaoth Dobhair went from 1961 to 2002 without winning a Championship. They added another Dr Maguire in 2006, but in the eight years since they’ve watched St Eunan’s, Glenswilly and Naomh Conaill pass the parcel containing the silverware.

Around 2005, Tom Beag Gillespie, Donnchadh MacNiallais and Brendan Boyle sat down and examined the club’s underage structures with the Bord na nOg of the time.

The six county minors and MacNiallais are all products of the new system.

“They’re committed and they want to play – that’s the big thing about those lads,” Gillespie says.

“They make the sacrifices and they put a lot on the line. It’s great to see them getting the rewards out of what they’re putting in. It’s great for the parish to see so many of our young lads heading off to Croke Park to represent Donegal.

“Around that time in 2005 we didn’t have great numbers in our systems at underage. We came in at the time with a plan to get the numbers of first of all and then we looked at the teams to try and get them winning.

“We all know about the tradition that is in Gaoth Dobhair, going back to ‘32. There’s fierce pride in the fact that nine of our men are going to Croke Park on Sunday.”

Owenie Beag McBride didn’t get a chance to represent Donegal at Croke Park, but he did play there with a Comortas Peile na Gaeltachta winning side and he was a selector with Mickey Moran during his time as the Donegal manager. In 2002, they took Dublin to a replay in the All-Ireland quarter-final, but lost out in the replay.

“We gave it a good rattle after beating Meath to get to the last eight,” McBride says. “We were glad to get a crack at the Dubs, but we should have beat them the first day. We just fell apart in the replay, but it was a good learning experience.”

The links between Gaoth Dobhair’s glory days and now are clear.

MacNiallais and Mulligan are both grand-nephews of Hughie Tim; McBride is the grand-nephew of Nonnie Gallagher who won three Donegal SFCs with the club; and Carroll is the son of the late Francie Carroll and nephew of Antoin. 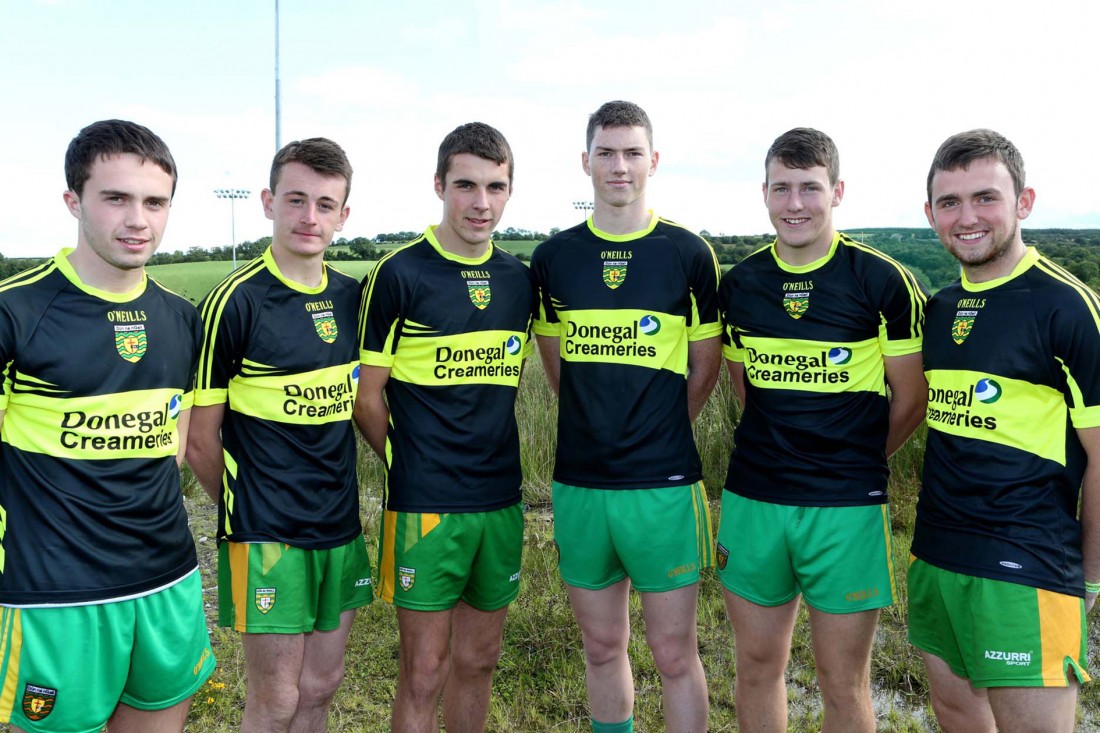 Carroll is one of the youngest members on the minor panel. He just turned sixteen late last year.

“Michael is a ready made inter-county player,” Gillespie says.

“He has matured so much. He’s a top player. He’s had a great year and has been very consistent. He’s certainly made a big impact.

“They’ve all showed leadership – when the minors needed someone to step up against Roscommon it was Cian Mulligan who came up with the goods.

“You look then at Ciaran (Gillespie) at full-back. He’s been up with Declan’s teams since he was fifteen, but it took him three years to make it in. We all knew the talent that he had. Once he got in there was no looking back. He’s a big, strong lad and he’s a great footballer into the bargain.”

The McGee brothers have played over 200 senior games between them for Donegal, while MacNiallais’s emergence this year has been one of the brightest points of the year.

“Odhrán is a top player,” Gillespie says. “Fair play to Jim for sticking with him. He’s played every game this year and has repaid Jim for the faith. He has been on the panel a while, but it’s taken him a year or a year and a half to get up to this level. Confidence is a big thing for Odhrán, but once he found that bit of confidence he’s just got better.”

MacNiallais netted a clinical goal against Armagh in the All-Ireland quarter-final and has had some eye-catching displays in his breakthrough year.

“Odhrán is still on the way up as a player, but he’s very stylish and he reads the game so well,” says Jimmy Mhicí.

Owenie McBride examines the eight players reared on the Gleanntáin Ghlas heading to GAA headquarters hoping to make it into an All-Ireland final.

“It’s some achievement for the club,” he says.

“The opportunity available to these players now is massive. There were so many players who never got this chance, so many players who were great servants. I remember in the old days your head would have been down if you’d been drawn against Cavan or Down – Donegal don’t fear anyone now.

“It’s a great boost for the parish and Sunday is a big, big day. Gaoth Dobhair will be deserted!”

They look back at ‘92 and admit it was strange to watch Donegal winning an All-Ireland with one of their own. Peter McGee was on the panel in 2012, meaning the three McGee brothers came back with Celtic Crosses. Many of the greats shed tears that Tuesday night two years ago when the three McGees carried Sam onto Gaoth Dobhair soil.

“That meant so much,” McBride says. “The McGee boys are real stalwarts – no better men to break the mould.

“When Gaoth Dobhair were producing those great teams and players back in our day, the county set up wouldn’t have been up to much. It wasn’t until (Brian) McEniff took it over that things changed and when Donegal started to win titles in the 70s, we were on the way down in the club. We had the likes of Antoin Carroll and Neilly around for ‘72 and ‘74, but that was it until the present day players.”

Jimmy Mhicí believes Donegal can upset the odds and be celebrating a double victory on Sunday.

“We can upset them and if we can stop the goals we can beat them,” he says.

With the hands of Gaoth Dobhair guarding the house, Dublin will find the door hard to break down.