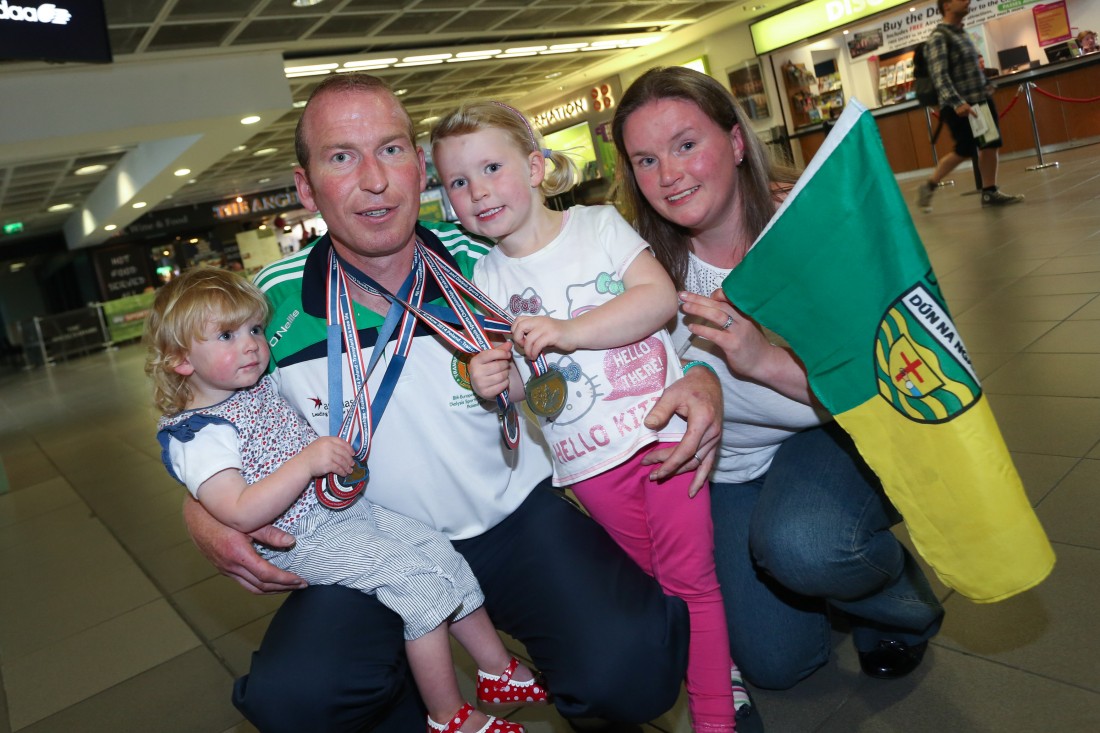 Three times Gold medal winner, Ramelton man Kieran Murray, pictured with his family at Dublin airport at the weekend when he and other members of Transplant Team Ireland returned from the 8th European Transplant and Dialysis Championships in Krakow, Poland.

THE Donegal participants in last week’s European Transplant Games in Poland have returned home tired yet victorious.
Ramelton man Kieran Murray, a kidney transplant recipient, fared exceptionally well at his first Transplant Games securing three Gold medals and one Bronze medal. His Golds were won in the 5km mini marathon, the 1500 m race and also in Golf. He won a Bronze medal for coming in third place in the 800m race.

The 34 inspirational Team Ireland athletes returned home from Poland this weekend after their outstanding performance at the eighth European Transplant & Dialysis Sports Championships in Krakow.

With its impressive medals tally of 18 Gold, 18 Silver and 31 Bronze medals, Transplant Team Ireland was ranked in the top three position on the medals table, just behind Hungary which took first place and the host country Poland in second.

The Team received a rapturous welcome home at Dublin airport from family and supporters festooned with flags and banners.

Transplant Team Ireland Manager Colin White, newly elected Secretary of the Presidential Committee of the European Transplant and Dialysis Sports Federation said: “It’s fantastic to be placed in the top three on the medals table out of 24 countries. The Championships were very well organised by the Polish hosts.

“Each and every member of Transplant Team Ireland proved to be great ambassadors for organ donation both on and off the competitive field and each of them wore their Irish kit with pride and honour. The ten newcomers to Transplant Team Ireland this year are tremendous additions and we are delighted to now have them in our ‘extended’ family. Each team member worked hard in their sports events. They competed in heavy downpours of rain on Thursday, intense heat on Friday and it was very changeable the rest of the week.

When not competing, Transplant Team Ireland enjoyed the sites of Krakow taking in the old town and main square and tours to Auschwitz and the Wawel Cathedral. The team enjoyed reuniting with old friends from previous Games and making new friends with people who have shared similar life experiences. In true Irish form members of the team enjoyed having sing songs and partaking in the karaoke on campus.”

Colin White explained: “Every performance at the Championships is worthy of note. Some highlights are the great performances by the newcomers including Sean Marshall (Kerry), Zimele Brown (Galway) and Kieran Murray (Donegal). Team regular, Sheila Gregan from Nenagh, took the Ladies Virtual Triathlon title to add it to the World title she won in Durban, South Africa, last year. Long time team member, Hugo Boyce, from Clonmany celebrated his 65th birthday during the week of the Championships. 26 years since his kidney transplant, Hugo is a wonderful example of what can be achieved with the Gift of Life that is organ donation.