Advertisement
HomeSportGAADonegal v Dublin preview: The biggest test yet – but Donegal are capable of pulling off an upset
Advertisement 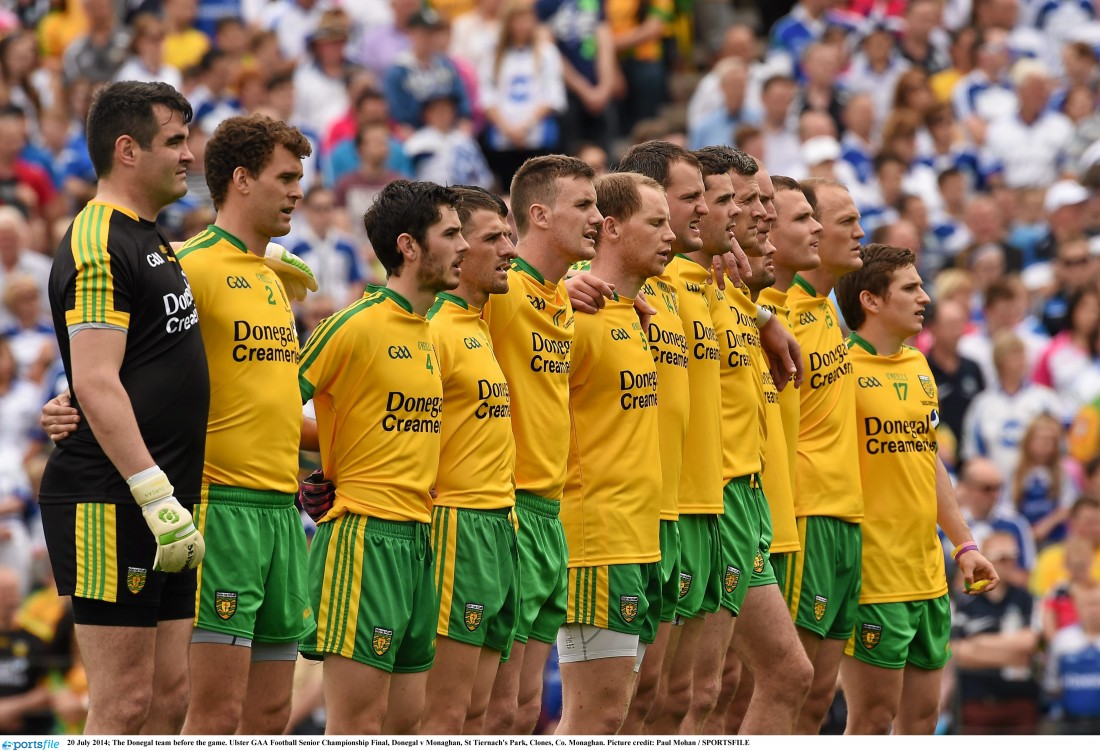 Donegal are at full strength for Sunday’s All-Ireland semi-final.

The complexity in analysing this one is in examining just how Donegal can go about lowering the blue and navy colours from the flagpoles of Hill 16.

Sunday’s All-Ireland semi-final is seen as the biggest test for Jim McGuinness in his four years as Donegal’s manager. It will be his 23rd Championship game as manager and is in search of a 20th win. After the Ulster final triumph over Monaghan, McGuinness billed the victory as the greatest of his tenure.

This weekend, he can go to another stratosphere if he manages to dodge the rapid fire of the Dublin machine guns. So far in the Championship, Dublin have scored a whopping 9-88. Laois, Wexford, Meath and Monaghan could have upped camp and left Croke Park before the three-quarter mark was reached.

Donegal must hope they can keep that swashbuckling attack at bay long enough to ensure that their challenge remains alive. Monaghan managed it for 23 minutes of the quarter-final, but goals by Diarmuid Connolly and Bernard Brogan broke the resistance. By half-time, Dublin were nine in front and the gaze up to a scoreboard that told him ‘2-9 to 0-5’ painted an ominous picture for Malachy O’Rourke.

It is the goals that Dublin have used to kill teams and their winning margins of 11, 16, 15 and 17 points respectively shows the size of the challenge that faces Donegal, who have managed to get the jobs done without hitting the high notes this summer. While their attack has not had the panache of 2012, the defence has not been as watertight as those famous Sundays of 2011 when Donegal rocked the nation with a massed blanket against Dublin in the semi-final.

McGuinness has made the point several times that this Dublin, under Jim Gavin, is an entirely different animal to that which was almost suffocated by Donegal three years ago. Pat Gilroy’s side were at breaking point, but they managed to get a second wind and survived.

“It was a different type of system under Pat Gilroy,” McGuinness said.

“They kept the six defenders back. It was rare to see the half-backs push on. That’s not the case now. Everyone pushes on. It’s a totally different dynamic from that point of view. In terms of their attack, it’s not that much different.

“They still like to get the ball in, they still like runners off their full forward line. They’re dynamic in the middle still. What they have done is give their half backs licence to bomb on. They’ve got the best goalkeeper in the country and that’s a huge weapon in their arsenal also.”

Dublin have been described as a ‘juggernaut’ and have built an almost invincible aura. The turf accountants clearly concur given that Donegal are ranked as 7/1 outsiders. Absurd odds, you can argue, but Dublin have walked the walk without talking the talk this year.

The talking has been done for them.

The problem with stopping Dublin is that they have so many matchwinners. Take, for instance, Michael Dara Macauley and those devastating swathes he cuts, or the power of Paul Flynn and Connolly, the directness of Jack McCaffery and the excellent goalkeeper, Stephen Cluxton, widely regarded as the key man for the Dubs.

When Dublin played Wexford, Cormac Costello was the star, hitting 1-5. “We didn’t expect that,” said Ben Brosnan. “We were watching for Brogan and we just hadn’t planned for Cormac Costello.”

Speed, accuracy, movement and power; Dublin have it in abundance, but are they as unbeatable as we’ve been led to believe? Time will tell, but McGuinness clearly believes that Donegal have the capabilities.

“We are in it to win because people are putting their lives on hold,” the Donegal manager said.

“I see Donegal in an All-Ireland semi-final. You can talk about philosophy and generalise, but we’re in an All-Ireland semi-final. We take each game on its own merits and look at how best we go about trying to win that game. It’s coming together nicely I feel. We are building steadily. We’re going in against the top team in the country and it’s a massive challenge – but it’s one we’re looking forward to.

“It will be a significant challenge.

“They bring an awful lot to the table. They have great balance and pace in their team.

“We’ve got to get ourselves right. We’ve been working since the start of the year on developing systems and develop things that hopefully make us a better and more efficient side. We can’t disregard that now just because it’s Dublin. That wouldn’t work. Psychologically, it would throw the players.

“Our lads have been around the block and a lot of them have played over 100 games for Donegal. They’ll need every bit of that experience if we’re to put it up to Dublin.”

McGuinness will need all of his front-line men to be on the button on Sunday. Against Armagh, they recorded fifteen wides. Anywhere near even half of that total will spell disaster on Sunday. Go back to that semi-final of 2011 and Donegal had a 33 per cent return from their shots, scoring just six times from 18 attempts. Again, that rate won’t be near enough on Sunday.

McGuinness has faced questions about a misfiring Colm McFadden, but the St Michael’s man will again be the foremost prong in Donegal’s attack.

McGuinness said: “Every single player in the side is crucial. If Paddy McGrath doesn’t do his job the corner forward on the opposition’s team will do the damage. Is Paddy therefore less valuable than Colm (McFadden)? I think not. It’s the same for the goalkeeper, full forward and so on. Everyone is crucial.

“All our forwards have come up against tight defences. This is our fourth Ulster side. Space is  at a premium. Colm and Michael are double sometimes or treble marked. There is this perception that if you take Colm McFadden and Michael Murphy out of the game then Donegal won’t win. That proved to be incorrect this year as we got our scores from other places.”

McFadden and his St Michael’s colleague Christy Toye will become the first Donegal men to play in four All-Ireland semi-finals this Sunday, while they, along with Paul Durcan, Neil and Eamon McGee, Rory Kavanagh, Karl Lacey, Neil Gallagher and Frank McGlynn have all played in excess of 100 games in the green and gold.

Neil McGee will be playing in a remarkable 44th consecutive Championship clash.

Every sinew of that experience will be needed and Donegal will also want to be as disciplined as they were in the face of an almighty war against Armagh.

So, what can McGuinness conjure up to dethrone the reigning All-Ireland champions?

Second guessing the Glenties man has become a futile exercise. His ability to throw up surprises has been seen throughout the summer; think of that day he started ‘without’ a midfielder against Derry for instance.

Just what the joker up his sleeve is this week remains to be seen, but what McGuinness has is utter belief in his players and the system they will employ. At a five-day training camp last week in Johnstown House, Donegal will have been executing those things to a point almost where they become automatic.

The manager said: “It’s not just about doing things, but about clarifying things. You could have a conversation with a player and you might think they know what you’re talking about, but there may be confusion when you go back to clarify it.”

Employing a defensive set-up similar to 2011 has been a popular theory, but would it be as effective this time around? Kickouts will be the most vital aspect of Sunday’s fixture and possession will be king.

While Donegal allowed Dublin to take receipt of every one of Cluxton’s kickouts in 2011, don’t be surprised if the lines push up to more advanced positions this time around.

Repelling Dublin’s feared attack hasn’t worked for anyone yet this summer, but no-one has managed to put the Dubs on the backfoot, so doing just that and aiming for the blitzkrieg in the early stages is another option. Whatever the plan and wherever he goes, Michael Murphy will be the centrepiece to the project. Dublin’s defence has looked ropey at times and the Donegal captain has those magical keys that could unlock the gates to paradise.

The problem being that he has been so effective around the middle. McGuinness admitted last Friday at a function in D2 that he’d love to be able to ‘clone’ Murphy to have him at midfield and at full-forward.

Donegal do have the defenders to keep the shackles at least tighter than anyone else has managed so far. What they’ll need to find, however, is a few more scores and it is here that Murphy and McFadden become the main pieces on the chessboard.

Around the middle, whoever is selected of Gallagher, Toye, MacNiallais, Kavanagh and McLoone will be asked to get the hands dirty in the rough and tumble. Murphy will be in that warzone at times, but Donegal must make use of every last drop of water that leaks their way.
No team is unbeatable and wearing the odds-on tag hasn’t sat well with Dublin before.

Donegal aren’t quite at the levels of James ‘Buster’ Douglas, who was a 42/1 shot to beat Mike Tyson in the heavyweight final of 1990, but few give them a chance. Tyson was ‘unstoppable’ but was knocked out by Douglas in the tenth round.

Donegal must jab like Douglas for as long as possible, but given that it’s unlikely they’ll hold Dublin for the duration they could be doing with a knockout uppercut before the finish.

McGuinness laughed when asked at the recent press day if Donegal could ‘scare’ Dublin.

“If that’s the height of our expectations then there is no point going to Dublin.”

Remember, this is a day, a game and an opposition that has been on Donegal’s radar for some time now. A lot of that ‘road testing’ of the National League was with Sunday somewhere lodged in the mind. Sunday could also be the last cast of the die for some of Donegal’s greatest soldiers.

You’ll watch large portions of it with your face covered and it could be an uncomfortable afternoon, but if Donegal can up the percentages on their scoring, September’s third Sunday is not beyond them because they are one team who can hold the shield firmly to Dublin’s sword.

Donegal to sneak it. Is it really that impossible?