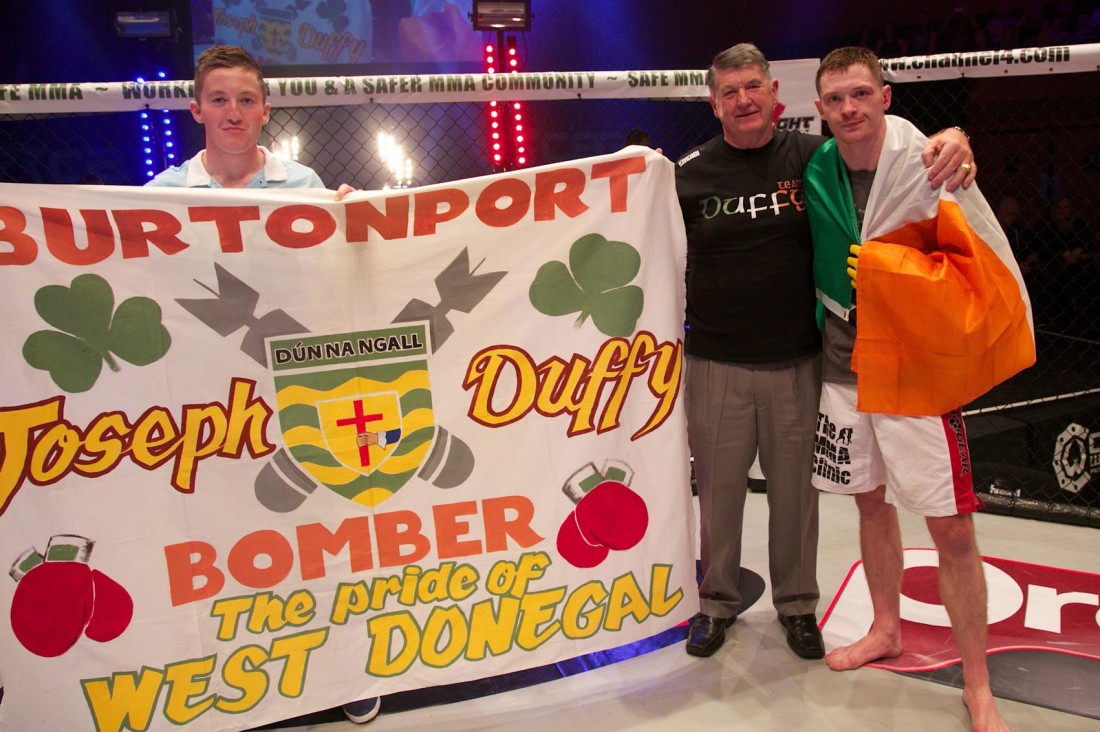 BY SEÁN P. FEENY
ON Saturday night a Donegal man marked is big return to the sport of Mixed Martial Arts with a confident performance in Dublin.

Joseph Duffy, originally from Meenbanad, Burtonport, was the main attraction at Cage Warriors Fighting Championship 70 where he fought rising French star Damien Lapilus in the main event in the Helix on Saturday night.

The 26-year-old is the son of Inishfree native Joe Senior and Theresa (nee Gallagher), who is originally from Meenbanad just outside Burtonport, but grew up in Wales.

Making his return as a Mixed Martial Artist following a two-year stint in pro-boxing, the Burtonport Bomber sent out a clear message with a third round submission that he is back to reclaim, not only his number one contender spot, but the Cage Warriors lightweight title.

“It was great to be back, the atmosphere was incredible. I’m glad to get the ball rolling again,” Joseph told Cage Warriors TV in is post-fight reaction interview, “The atmosphere was like nothing I’ve ever experienced. It was a night I won’t forget, that’s for sure.”

The Meenbanad man clearly showed off some great boxing skills during the fight, but in the end it was his Brazilian Jiu Jitsu skills that got him the win to make it 11 wins and only one loss in his professional career as a Mixed Martial Artist.

“I knew he (Lapilus) was a pretty well-rounded fighter, I thought he fought a clever fight, moved a lot, picked his shots and didn’t sit still for too long. You’ve got to give him credit, he fought well.

“I suppose when you go into a fight you don’t really expect anything. You’re confident and you trust your ability, but you’ve just got to take what’s presented,” Joseph said.

Joseph is hoping to get onto the next London card of Cage Warriors, which will take place on February 16. “Hopefully, I’ll get onto the London card. Again I don’t know who they are going to match me with next, I’ll just keep on fighting and enjoy what I’m doing.”

Asked about where he feels he is placed in the division, now that he is back, the Donegal man was modest as ever in his response.

“I wouldn’t say it places me too close to the top, but you know give me six months and I think I will be back up there,” Joseph said.

Also representing Donegal on the Cage Warriors 70 card was featherweight Tommy McCafferty who made a huge impression on his debut with the promotion.

Having signed a five-fight deal with Europe’s largest MMA promotion, the Letterkenny man was keen to make his mark and that he certainly did.

Tommy, who represents Team Torres, rocked his opponent Dean Reilly with a huge right on his way to a second round win. The stoppage was questioned in the live commentary, but Dean Reilly admitted afterwards that it was a correct call.

Tommy told his online followers: “Just home from Dublin from what can only be described as a fantastic night. What an honour it was to have fought on such a show and against a great opponent, extremely professional and great to work with.

“Thanks for having me on Cage Warriors and a massive thanks to my sponsors, trainers, training and sparring partners, my family and girlfriend for all the support.”

The 17-year-old, whose grandmother hails from Lifford, defeated Matthew Mullan on the amateur card in a split decision following a tough battle over three rounds.

This marked James’ fourth win as an adult amateur against what was his toughest opponent yet as he moved from featherweight to lightweight.