Advertisement
HomeColumnistsNo Bones About ItDeclan Bonner: Seasoned Mayo can show they have the ‘stomach’
Advertisement 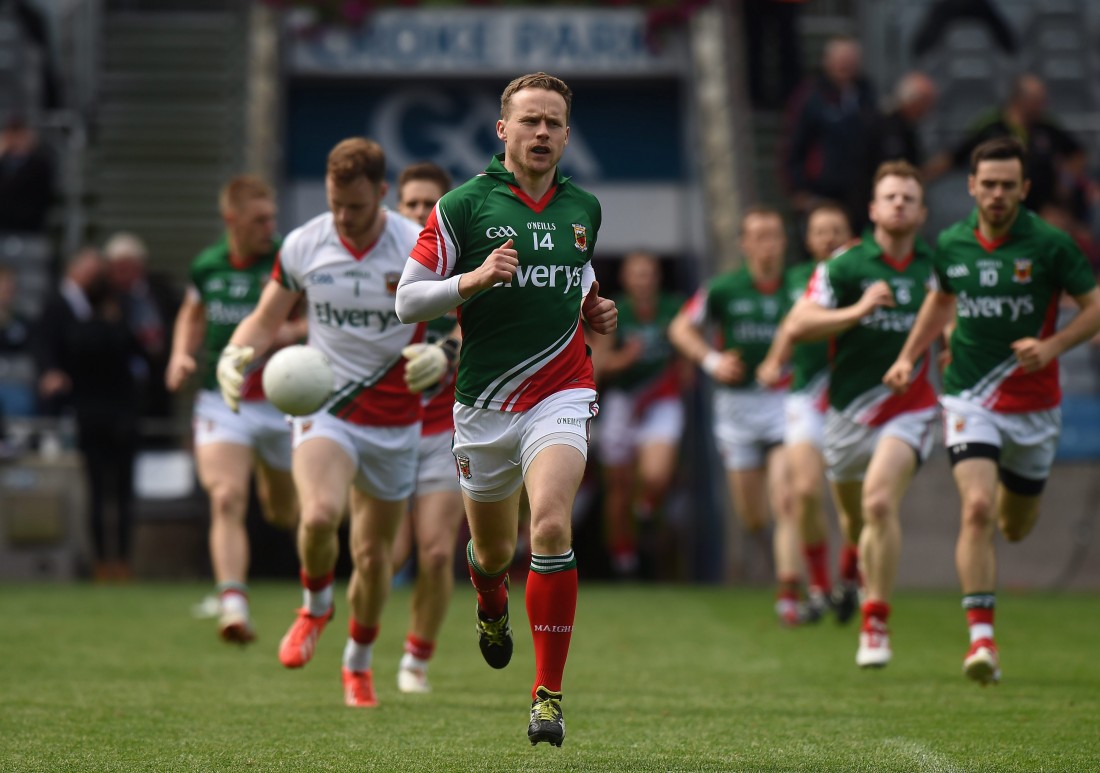 Mayo captain Andy Moran leads his team out before the All-Ireland SFC quarter-final against Cork.

UNTIL Mayo get over the line and actually take Sam Maguire back out west again, those questions and nagging doubts will hauntingly circle them any time they head for Croke Park.

James Horan takes his team down the Jones’ Road this Sunday where victory will put them into a third All-Ireland final in a row. With painful defeats to Donegal in 2012 and Dublin last year, it has taken some amount of mental steel and resolve for Horan’s side to go back to the well and still bee going in pursuit of Sam in late August again.

You get no prizes for reaching the semi-finals, though, and Horan will be well aware that his own position will be scrutinised heavily were they to lose on Sunday against Kerry, who have pretty much arrived at the last four without fuss.

This has the makings of a tough encounter and it’s probably fair to say that we don’t know an awful lot about the state of mind of either side heading into the game.

All the same, I thought it was a bit odd that Larry Tompkins came out this week questioning Mayo’s ‘stomach’ for big occasions. Tompkins is a two-time All-Ireland winner with Cork and it was bizarre given that Mayo had shown good nerve in not buckling when Cork asked the questions of them in the quarter-final.

Sure, you could feel Mayo’s nerves jangling at times, but all the same they were impressive more than shaky in that win over the Rebels.

‘They would want to grow up a small bit,’ Tompkins said in an interview that is sure to be passed around the Mayo squad this week.

Certainly, Kerry won’t be offering their thanks to Tompkins, whose blast is sure to have put an extra piece of kindling on Mayo’s fire.

It is 63 years since Mayo won Sam and they’ve managed to lose seven finals since. Mayo have been the bridesmaids so often, but haven’t managed to get their hands on the bouquet yet. I don’t think anyone would begrudge Mayo the big day out.

I believe they will win Sunday’s match – they really have to. Despite the disappointments and consistent failures at Croke Park they are a seasoned side. They were unlucky in last year’s All-Ireland and they were blown out of the water by Donegal inside eleven minutes in 2012.

Lee Keegan has been in excellent form and a win for Mayo on Sunday with another good performance by him will surely see a Player of the Year nomination. Keegan has developed so much as a player in the last couple of years and has come into his own this summer.

They can rely on Aidan O’Shea at midfield, Jason Doherty has stepped up his performances and they have Cillian O’Connor in good form too. Mayo will be hard to beat on Sunday and they will sense redemption and even the possibility of looming immortality were they to go the distance and finally cut the tape this year at the line.

Against Cork, you could see the deck beginning to fold once they found themselves on the back foot. They were nervy despite looking so impressive for long periods, but it wasn’t a bad way to win a quarter-final.

They cannot afford that to happen again and will be looking for a statement win on Sunday – always important for the first team to make their way to the final.

One thing Tompkins got spot on was his assessment that Kerry will have no fears about Croke Park this weekend. It is a place where Kingdom teams have consistently delivered and, even in the absence of Colm Cooper, Tómas Ó Sé and Paul Galvin – three of the great players of their generation – Eamon Fitzmaurice has guided them to the semis.

Kerry were so impressive against Cork in the Munster final and got the necessary done against Galway in the All-Ireland quarter-final. James O’Donoghue has been many peoples player of the summer, but I don’t know if it’s true that he’s quite at the ‘unmarkable’ stage just yet.

He has been playing well and has been carrying the can quite impressively. If he shows the same form and Mayo’s full-back line issues haven’t improved – and they looked in real bother the last day against Cork – then Kerry can win it. One of the big tests on Sunday facing Horan is what he does to combat O’Donoghue’s threat.

Kerry’s transition has been swift and smooth. In Cooper and Ó Sé they had two players who could make it onto all-time Kerry teams – and they’re no easy XVs to get into! – but to deal with their absences as they have done has to be commended.

That said, Kerry haven’t been particularly troubled yet in the Championship. In fact, Clare probably gave them as close a run as anyone in their opening Munster game. They ran Cork ragged in the Munster final and they’re a dangerous outfit once they get to Croke Park.
O’Donoghue has been the stand-out, but the return of David Moran – back after two cruciate operations – has been a big boost and Paul Geaney has been another good find for Fitzmaurice.

They have an abundance of young talent coming through and the conveyor seems well oiled around the Macgillycuddys.

It’s interesting to note the impact of the coaches in Kerry and Mayo ahead of Sunday’s game. Cian O’Neill is now with Kerry having been alongside Horan in Mayo while Donie Buckley has moved in the other direction.

Brendan Kealy mentioned the lift O’Neill gave Kerry when he came in and the same benefits appear to have been given to Mayo by Buckley. The fresh voices appear to have done the trick with certain things in the respective dressing rooms.

Sunday’s minor match will also be worth keeping an eye on. Jack O’Connor is in charge of the Kerry minors having shunned two senior county jobs to take them on. That in itself should tell a tale about their talents. In Killian Spillane they have an outstanding forward – a son of Tom and nephew of Pat he could be the latest Spillane to shine at Croke Park.

I saw them a couple of weeks ago and were very impressive, but they face a massive game against Mayo, who are the reigning All-Ireland champions and who have improved steadily as the summer has gone on.

For me, it’ll be a Mayo double on Sunday.

THE Donegal senior team have gone into a training camp and this is an absolutely vital time for them as they prepare to face Dublin on Sunday-week in the All-Ireland semi.

These training camps are so important for the team. People will often point to the cost of these weeks and weekend but, for me, their value cannot be measured in monetary terms. What goes on at these training camps is often invaluable.

It is here where Jim McGuinness will be laying out the plans ahead of the Dublin game. It is here where big stuff goes on in terms of preparation and it’s all with one goal in mind – Beating Dublin.

In the training camp, so much goes on from video work, to working in game situations and looking at Dublin’s danger men and who’ll be picking them up.

In these moments there are a lot of things for everyone to do, between the medical team ensuring the fitness levels are as high as they can be in the run up to the game, to statisticians compiling all the necessary numbers and the video team doing their thing.

One area I think Donegal can exploit Dublin is on Stephen Cluxton’s re-starts. Basically, you have two option: Concede them or attack them. I think Donegal’s best strategy will be to go and attack Dublin, to get high up the park and put the pressure on.

There has been a huge interest in this game and you could see that first-hand on Saturday with the big crowd of national media reporters who attended the press day in Letterkenny. They’re all wondering what Donegal will bring to the table, but it’s unlikely they’ll have left any wiser than they were coming down the M1.

The betting offices have Donegal as the rank outsiders and Dublin as the unbackable favourites – it’s ideal for Donegal really.