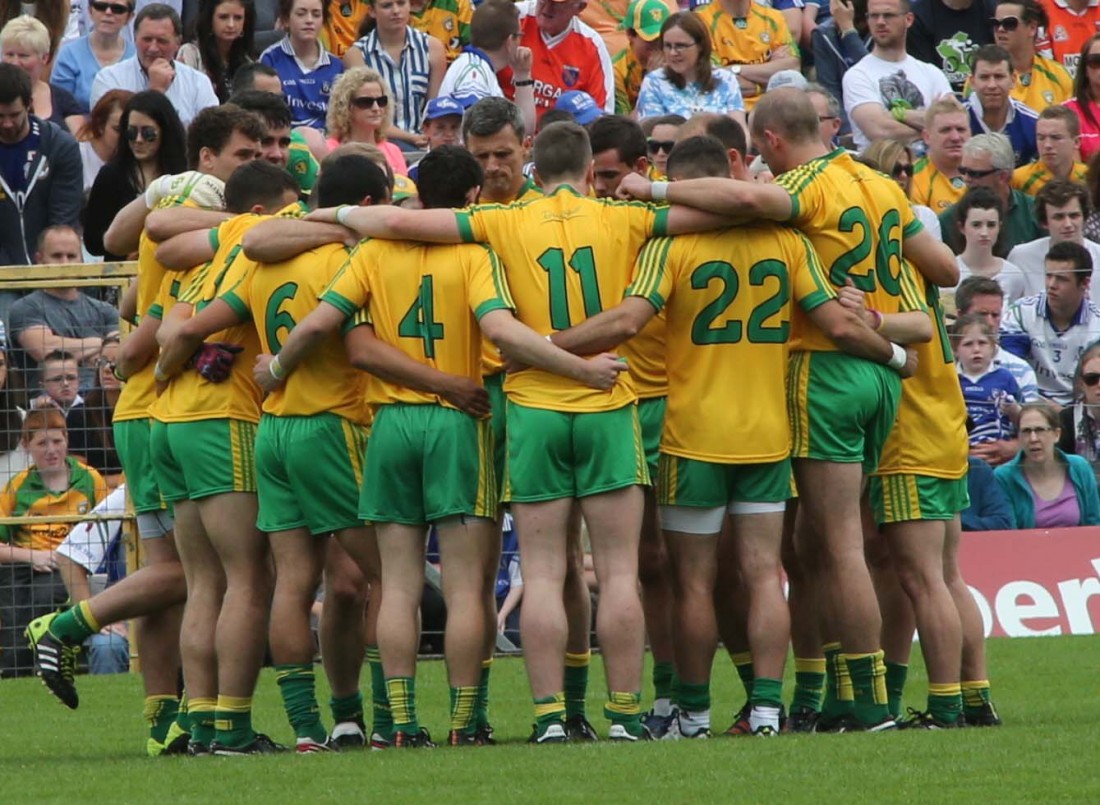 The Donegal squad in a huddle before the Ulster final. Photo: Gary Foy

Every weekend seems to be a big weekend for Donegal GAA followers at the moment and we have another one to look forward to this week with the Donegal senior team facing Armagh in the All-Ireland quarter-final.

It’s going to be another big test for the team and Armagh are a county that we have really struggled against over the last 15 years.

I played against Armagh and managed against them and you always knew that they would give you their fill of it.

I was in the senior manager in 1999 and we played them in the first round of the Ulster Championship, and it turned out top be a pivotal match in Armagh’s rise to glory.

We faced them in MacCumhaill Park and current selector, John Duffy scored two goals to give us a comfortable lead after the first quarter of the game.
We should have coasted home, but Armagh fought back and rescued a draw. They went on to win the replay in Clones and ended up lifting the Anglo Celt Cup that summer.

Kieran McGeeney, Oisin McConville, Diarmuid Marsden and Enda McNulty were all part of that Armagh team and that victory was the catalyst for their drive to win Sam.

They were hard men, but they were also a good team and they finally got their day in 2002, when they won the Sam Maguire.

That team dominated Ulster football, and they reserved some special treatment for Donegal.

They deprived a lot of good Donegal footballers of the chance to win silverware. Adrian Sweeney, Brian Roper, Shane Carr, Barry Monaghan and Damian Diver to name but a few, were talented players, who deserved an Ulster Championship.

However, Armagh held the indian sign over them and Donegal always came out second best.

In 2010, they hammered Donegal in Crossmaglen and that spelt the end of John Joe Doherty’s tenure as manager. Our record against them is terrible, but this is a different Donegal team with a superior mindset and I think they’ll be ready for the challenge this week.

You have to respect Armagh for turning around their season after a disappointing league campaign. Donegal relegated Armagh to Division 3 back in April and Armagh looked like a beaten docket at that stage.

However, they raised their game and they have looked like a different proposition entirely in the championship. They knocked out a fancied Cavan team and then forced a draw against Monaghan with three late points.

The Farney men got the better of them in the replay, but Armagh didn’t drop their heads and they have recorded three brilliant wins over Tyrone, Roscommon and Meath in the qualifiers.

Paul Grimley’s team are coming into this game on a decent run, but they face a rejuvenated Donegal side, who put together a great campaign to win back the Ulster Championship.

They appear to have rediscovered that hunger and belief that was missing last year and they were phenomenal in the Ulster final.

You have to give huge credit to Jim McGuinness, his backroom team and the players for the way they went about their business.

They will be focussed for the game with Armagh and they will know what they have to do. Jamie Clarke is Armagh’s marquee name and they rely heavily on him. On his day, he is one of the best forwards in Ireland.

I would expect that Neil McGee will be the man who will be tasked with curbing Clarke’s influence in the game.

Neil has been going well and he did a good job on Clarke in the league. He is tailor-made to mark him and I would be confident that he will do a good job.
Stefan Campbell is a good forward and he was man-of-the-match against Meath last week, while Tony Kernan has also impressed.

Kernan’s brother, Aaron is one the best half-backs in the country, but it was interesting that that Grimley wasn’t starting him. He got a chance last week when Ciaran McKeever was ruled out and he grasped it with both hands.

The talk is that McKeever won’t be available this weekend either and he will be a massive loss to Armagh. He is in the same mould as McGeeney and is Armagh’s leader on the pitch. It will be a huge boost to Donegal’s chances if he’s not fit.

Armagh have had a lot of joy with a defensive system and it’s going to be a tactical battle. McGuinness is excellent at managing those sort of games and I think Donegal will come out on top.

In the other quarter-final, you would have to expect Dublin to record another victory. They are favourites to win the All-Ireland and everyone is talking them up. That is dangerous territory and they will need to be careful.

They have a number of excellent forwards and they have super players on the bench, who can change a game if required. They face Monaghan on Saturday and it’s a huge ask of Malachy O’Rourke’s team.

Monaghan had a great 2013, but it is hard to maintain that hunger and they haven’t looked like the same team this year.

They’ve also picked up a few injuries and things just aren’t falling for them like they did last year.

They had a gruelling victory after extra-time over Kildare last week and that is far from ideal preparation before playing one of the best conditioned teams in the history of the GAA.

Dublin are aiming for back-to-back All-Irelands and we have seen just how difficult that is. However, they should have too much class for a tired Monaghan team this week and they should win comfortably.

The dust has not settled after the Minor quarter-final against Roscommon last Saturday, and we’re delighted to be through to the semi-finals.

There were a lot of questions asked of us and we got some answers, but maybe not as many as we would have liked.

However, the lads hung in there and they did what they had to.

It was an arduous task. The weather was atrocious and Roscommon came with a very defensive strategy. I’ve heard a lot of commentators talk about the demise of football, with such negative tactics being implemented at minor level. But it’s just part and parcel of the game now. If you got the length and breadth of the country, teams are playing like that and it’s not going to stop any time soon.

Roscommon were disappointed with the Connacht minor final and there was maybe a bit of damage limitation with the way they set-up.

We were expecting that, but it was still difficult to play against. We kicked seven points from play and they were all terrific scores from distance.

Roscommon made life as uncomfortable as they could for us and you have to say they battled hard.

They got a goal with 13 minutes to go and that gave them belief and if they maybe got a slice of luck at the end they would have won. But I was really proud of my lads for the way the dug in and got the job done. Their backs were against the wall, and it could have went against them.

However, they gave it everything they have and thankfully we got over the line.

It was a great achievement and we’re now looking forward to a couple of weeks of good preparation before we head to Croke Park.

I went to Thurles on Monday to watch Dublin and Cork and I have to say I was very impressed with Dublin. It was a really open game and they won by four, but that could have been eight or nine.

They have some exceptional players, especially in the forwards and they will be formidable opponents in the semi-final. We have a lot of work to do but we’re looking forward to it and it will be a great occasion.

Hopefully, the seniors can win tomorrow and set up a Donegal-Dublin double-header.