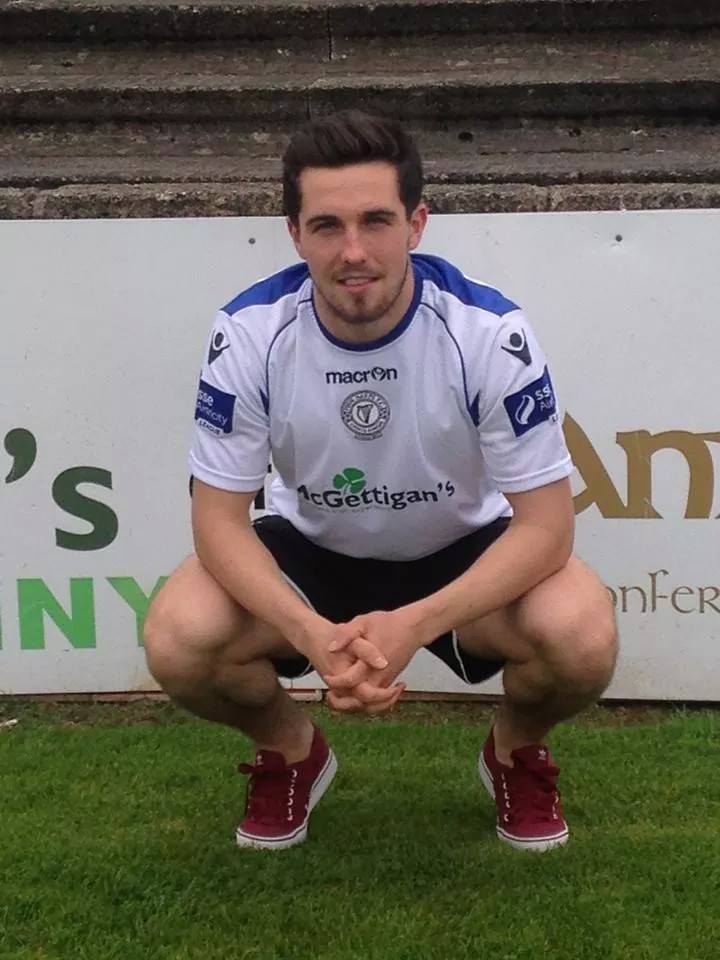 BY CHRIS MCNULTY
c.mcnulty@donegalnews.com
THE road back hasn’t been easy, but Brian McGroary can finally smile again.
When the board went up at Tolka Park last Friday night and his number flashed, as he replaced Pat McCann with nine minutes remaining in Finn Harps’ First Division clash with Shelbourne, McGroary could feel the familiar adrenaline rush.
It was something that was missing for the last couple of years.
The 21-year-old, who hails from Drimarone near Donegal town, has been plagued by injury and at one stage looked like he might have had to permanently hang up the boots.
Last Friday as he made his debut for Finn Harps, McGroary began the next chapter of what has been a dramatic journey. The road from Drimarone to Ballybofey has been paved with many twists and turns for the winger.
In 2009, the 16-year-old McGroary left Eany Celtic to take up a contract at Wolverhampton Wanderers and the world was his oyster.
When he was diagnosed with an inflammatory arthritis condition, his dream died and, in early 2012, he left Wolves. Two days later he signed for Derry City, but the condition just kept nagging at him and he could never make the breakthrough at the Candystripes.
A brief spell with Drumkeen United, after taking a year away from football in 2013, provided the pathway to Harps. After playing for the Harps reserves against Derry City in the Ulster Senior League, he was elevated to Ollie Horgan’s senior panel and came on for the first time last week in Dublin.
“I’ve only recently got a new treatment again,” he says of how he’s been allowed lace the boots again.
“I have to inject myself once a month. The injection stops it from getting at my joints.
“It’s happened so quickly in the last wee while. The opportunity to go in and play senior football came up and this is the first time in a long time that I’ve felt good.
“If I hadn’t have felt good I wouldn’t have made the move to Harps. Hopefully I can still step up to where I want to go. I signed for the reserve team at first, but my ambition was always to get into the first team. After I first played for the reserves I felt good enough and wanted to go to the first team.
“The game had opened up when I came on against Shelbourne, but I did fell very sharp. It was good to get to the pace of it again.”
When the condition was first diagnosed by the medics at Wolves, he knew his time was short in England and moves were afoot for a return to the League of Ireland.
“The amount of training that was going on at Wolves and the intensity of it was just too much,” he says.
“I had some bad days. Like, there were days where I could hardly get out of bed or drive my car. It was that bad at times. It basically destroyed my chance at Wolves.
“I had to look after it so carefully and really take care of myself too. I had to be in good shape in case I got a treatment so I wouldn’t be playing too much catch-up when I got back. My fitness was always pretty good so I was in with a chance and I’m just delighted to be playing again.”
The return to Ireland and the contract offer at Derry came a bit too quickly and he was the proverbial rabbit in the headlights.
He says: “I was straight into Derry’s matchday squad for a game against Linfield. The Brandywell was sold out. It was just too much to be thrown on the bench that early. I should have built it up slower.”
Then Derry manager Declan Devine had high hopes for McGroary and could see the potential in the player.
After he played 90 minutes in a 4-0 League Cup win over Harps in April 2012, Devine told the Donegal News: “Brian is a top player and I have no doubt when he gets a bit fitter that he’ll have a major impact to make. He is technically very good and has fantastic enthusiasm for the game. I’m delighted that he decided to sign for us.” 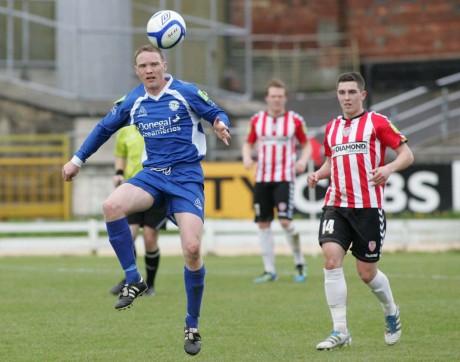 McGroary was in a dark place when he parted company with Derry. The questions began to build and he feared his career might have hit a cul-de-sac.
“That time I left Derry City, I couldn’t even do kick-ups on the street never mind a five-a-side,” he says.
“I took a year out and I was studying down in Sligo IT. It was during the year out they found the new treatment.
“It’s been a long battle. I’ve you’d told me twelve months ago that I’d be here now I’d have bitten your hand of.
“It’s the small things that mean a lot – a simple thing like going to training.”
Dr Alan Byrne, the Football Association of Ireland’s doctor, referred him to a professor in the Beacon Hospital in Dublin and their help has been instrumental in getting McGroary back on track.
McGroary is best friends with Carl McHugh and watched proudly in 2013 as he played for Bradford City in the Carling Cup final at Wembley. He keeps close contact with Donegal GAA players Patrick McBrearty and Luke Keaney.
McGroary is taking small steps and hopes to make the Harps starting XI in the coming weeks.
He says: “I’m building my fitness back again and doing a lot of the work on my own to get back. Starting off at the Ulster Senior League was perfect to find my touch again.
“I’m aiming to get a start now some of these weeks. I haven’t got many sessions under my belt so I’ll take it gently for a while.”