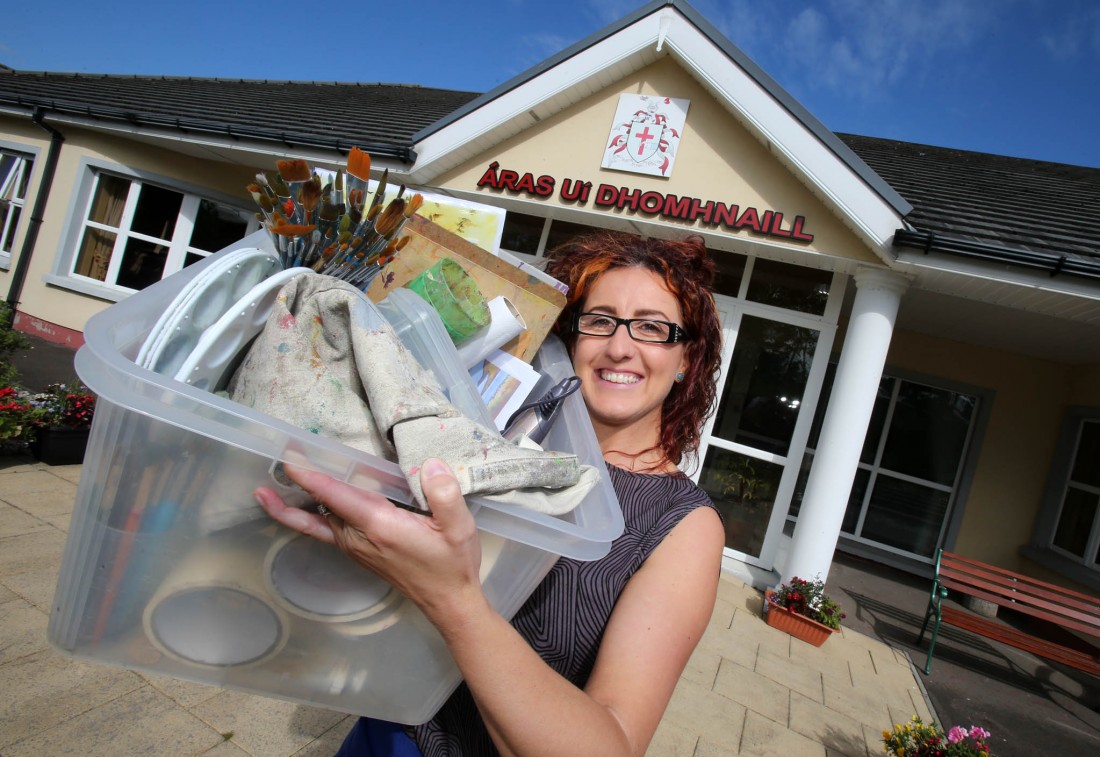 NOT known to follow the herd, a popular young Milford woman decided last week to do her very own ‘Ice Bucket Challenge.’

Charity, as they say, begins at home. So Bernie Wilson (36) decided against allowing herself to get caught-up in the worldwide craze that is currently sweeping the nation.

The challenge involves dumping a bucket of ice water one’s head to promote awareness of Motor Neurone Disease and to encourage donations to research.

However, instead of pouring a bucket of ice cold water over her head and posting a video of it on Facebook, Bernie filled a bucket with paints and brushes and headed to the nearby Aras Ui Domhnaill Nursing Home.

“Those of you that know me, know I try my best to make a little difference in the world, so this morning I have decided to do an alternative ice bucket challenge,” Bernie posted on her facebook page last Saturday.

“I will give up my Saturday morning/pay/time and take my happy smiley face and artistic skills to a local nursing home. Make a difference in your community however you can, as well as donating Text MND to 50300.”

A former art teacher, she set-up her own business, ‘Art Farm,’ in 2012. Art Farm facilitates workshops to help encourage, enrich and inspire creativity in all people, young or old, within their community or environment.

Speaking to the Donegal News, Bernie said that while she encouraged people to donate to Motor Neurone Disease, it was also vitally important to do something locally.

“It’s so easy just to follow what celebrities are doing and text a couple of euro to a worthy charity,” she explained.

“However, it is as equally important to get up and actually do something positive for your local community. It’s easy to throw a bucket of water of your head and that’s great if it raises money for charity. However, if you’re able bodied and have some time on your hands, you should do a proper challenge for something local. I am very passionate about that.
“Sometimes, older people are left out or are forgotten about – they are also affected by Motor Neurone Disease – so, that’s why I chose to go to the nursing home.”

Surprisingly, despite encouraging people to donate to the charity, Bernie’s antics in Milford earned her a few digs from “friends” on her Facebook page.

For full report, see this Friday’s print edition of the Donegal News.