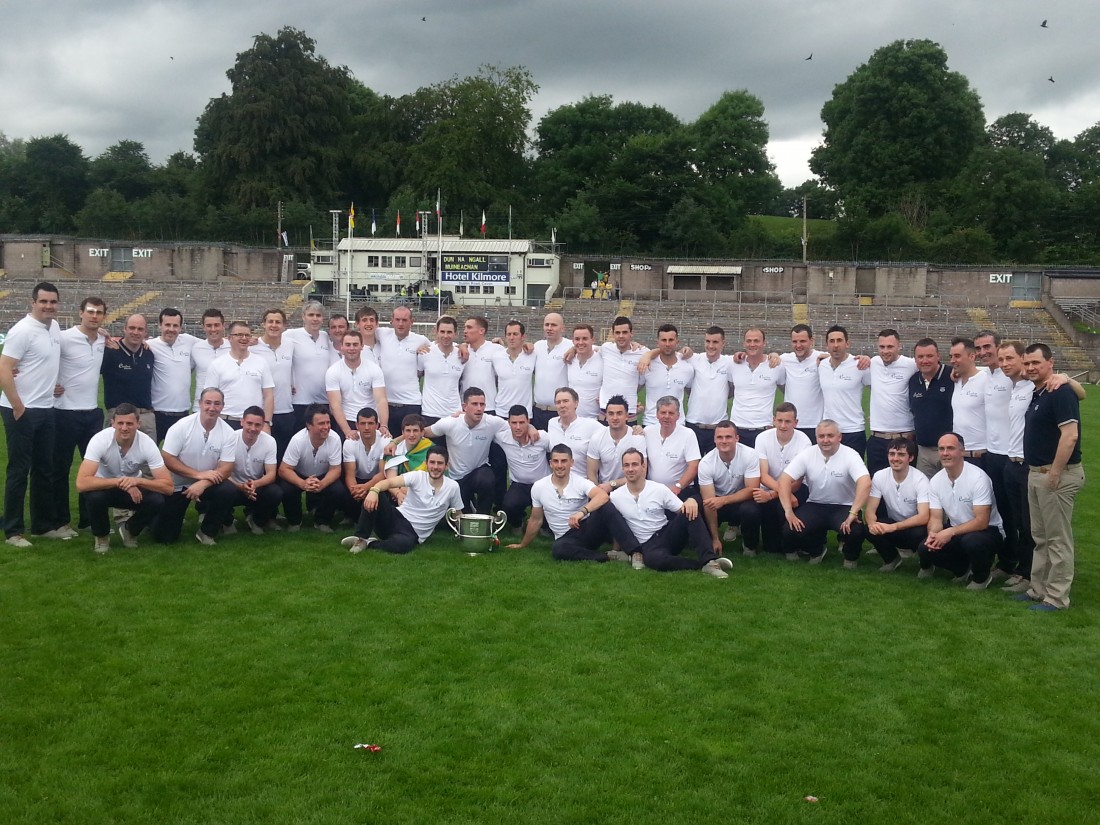 AN estimated 5,000 delirious supporters crammed into the Diamond on Sunday night to greet the victorious Donegal teams after their heroics brought both the Ulster Senior and Minor championships to the county.

They came to greet the Anglo Celt Cup, which is back in Donegal for the third time in four years, and the Fr Murray Cup which was making its first appearance in the county since 2006.

More importantly they came to pay homage to their heroes who, between them, delivered them to the Promised Land with Sunday’s spectacular historic wins over Monaghan and Armagh respectively.

While this was the fifth time in history that both Donegal teams contested Ulster finals in the same year, Donegal had never previously won the ‘dream double’ having reached the finals at the same time in 1963, 1991, 1992 and 2006.

Supporters flocked around the stage in the Diamond where MC Eamon Gorrell, chairman of the local Four Masters club, presented the triumphant Senior and Minor players and backroom staff to an expectant crowd.

Some fans had queued for more than three hours but it all seemed worthwhile when team captain Michael Murphy and his weary-looking troops walked out on to the main stage followed by Niall Harley and the triumphant minors.

Earlier, the minor team bus had stopped off in Harley’s home town of Ballyshannon while the seniors made what has, thankfully, become their ‘usual’ celebratory pit-stop in Pettigo where hundreds of supporters had gathered to welcome them across the border and back into Tir Chonaill.

Shortly before 11pm, both squads disembarked their respective team coaches in Donegal Town and marched towards the Diamond behind the Ardaghey Pipe Band.

Addressing the crowd, Sean Dunnion said that it was a proud night for him, both as a Donegal Town man and chairman of the County Board.

“It’s been a historic day. It’s the first time that we’ve won both the Minor and Senior titles on the same day and great credit is due to the two managers – Declan (Bonner) and Jim (McGuinness). Declan and his backroom team have been working tirelessly behind the scenes with this group of players for the past three years while Jim and his lads have been together for four years now. Great credit is due to all concerned,” he said.

Jim McGuinness admitted that there was a ‘lot of pain’ within the Donegal camp this time last year when their bid to win the Ulster title for a third successive year hit the buffers.

“We had our All-Ireland title and Ulster title taken away from us in the space of three weeks. It was a very hard place to be,” he admitted.

“In normal life or in life involved with the football team when something difficult happens you really need to think about where you’re at and really value where you’re at and, I suppose, over the course of the winter a lot of hard questions were asked,” he added.

All those questions were answered in emphatic fashion however earlier that afternoon when Jim’s team put Monaghan to the sword.

“Those questions had to be answered and for many of our players, particularly some of those who are getting on without saying any names, that was a very difficult time and it makes me feel very, very proud to be standing here in Donegal Town with another provincial title and with the players standing behind me who faced the situation down,” he said.

“They didn’t take the easy options. They didn’t cut corners. They decided that they were going to give it a big push and from the very first day we went back that has been the case. The focus has been phenomenal, the effort, the intensity..” he said.

“Today was the day we wanted. We wanted to be in Clones today and we wanted the opposition we played today,” he added.

The net result is a third Ulster title in four years.

“It’s been a phenomenal journey and no words can describe how I feel about this group of players. Every single thing that we’ve asked them to do they’ve gone way beyond that,” he enthused.
Next up is a quarter final meeting against the winners of this weekend’s Armagh/ Meath game at Croke Park on Saturday, August 9.

“They’ve got the character, determination and the will to win and I get the feeling that they’re not happy with an Ulster Championship and they want to push on now,” he said.
Paying tribute to the players, the Donegal manager said that they continue to give their all every time they cross the white line.
“As we’ve said many times once you’ve given everything with nothing left to give – and our players gave absolutely everything in their bodies for Donegal – that the best you can ask from anybody.
“The hope now is that we can consolidate and enjoy this moment and then focus on Tuesday night and get back to brass tacks and push on for the next few weeks,” he said.

Declan Bonner played in four successive Ulster senior finals, winning in 1990 and 1992, but losing in 1991 and 1993. He also won an All-Ireland title as a player in ’92 and was manager of the Donegal team who lost out in the ‘98 provincial decider. He too, was a very proud man on Sunday night.

“There’s been a lot of work over the last three years gone into winning this Ulster title and the lads all deserve great credit as do their families. They’ve trained really hard and looked after themselves,” he said.

“The support today was brilliant in Clones and it helped carry them over the line,” he said.

Leading by ten at the break (1-09 to 0-02), Donegal took their foot off the pedal in the third quarter a little only to finish the game strongly and eventually beat Armagh by eight 2-12 to 0-10.
“Great credit to the lads. They finished the game strongly. For the Minors and Seniors to win Ulster titles in the same year for the first time in history. It’s a great night,” he said.

It was indeed an unbelievable end to a perfect day. Next up for the Minors is an All-Ireland quarter final meeting with Roscommon in Markievicz Park, Sligo on Saturday August 2 while the Seniors are Croke Park bound for their quarter-final meeting with Armagh/Meath on Saturday, August 9