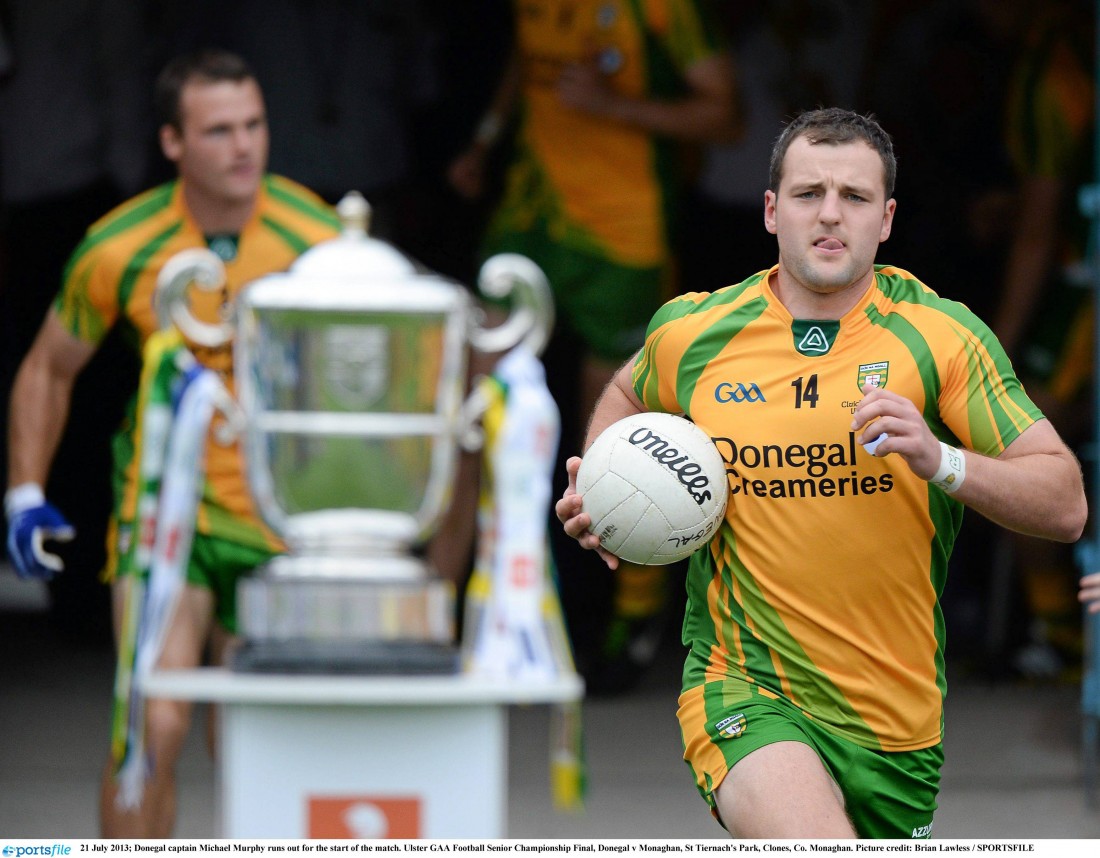 EYES ON THE PRIZE: Michael Murphy and Donegal have their eyes on recapturing the Anglo-Celt again when they face Monaghan in Sunday’s Ulster final.

WHEN Donegal contested five Ulster finals in a row between 1989 and 1993, they won two and lost three.

Defeats to Tyrone in ‘89 and Derry in ‘93 book-ended a glorious period in Donegal football. The Anglo-Celt was returned to the Hills in 1990 and ‘92. Sam Maguire paid a visit in September ‘92, but the good times dried up and the music died.

When Jim McGuinness took the conductor’s baton in 2010, the band was out of tune, but by the end of his third year at the helm, in 2012 when he delivered Sam Maguire to the county for a second time, the Glenties man himself was being celebrated in song.

Twelve months ago, Monaghan put in a pin in Donegal’s balloon when they scorched their way to a 0-13 to 0-7 Ulster final win. Donegal were tired, patched-up and battle-weary by the time they headed for the bear pit of St Tiernach’s Park in Clones. The defeat was McGuinness’s only defeat in the Ulster Championship as Donegal’s manager. To date, it is his sole entry on the debit side of a ledger that is very much in the black.

As he prepares to face Monaghan in Sunday’s final, with a full squad from which to select his team, McGuinness wants his side to recapture those euphoric moments they savoured with the wins over Derry and Down on Ulster final Sunday in 2011 and 2012.

If the period ‘89-’93 was the golden age for Donegal’s footballers then the current crop are on the cusp of usurping them. Victory on Sunday would take McGuinness’s record to a remarkable 12 wins in 13 Ulster Championship games across a four-year period. This, in what is by far and away the most competitive of provinces.

Standing in their way, though, is a Monaghan side determined to show their doubters that their success of last year – the county’s first in 25 years – was no flash in the pan.

“Monaghan played very well against Tyrone and they came through the test with Armagh,” McGuinness warned.

“They played very well. They’ll present a big challenge. They’ve got marquee forwards, who are difficult to handle.”

The manner in which their fingers were removed, one by one with each telling blow by ravishing Monaghan, from the Anglo-Celt last year is still fresh. But, as Damian Diver noted at the Ulster Council’s official media launch of the final on Tuesday, the ‘r-word’ hasn’t been mentioned.

“It’s got nothing to do with Monaghan now,” McGuinness stressed at his own audience with the media in Ballybofey a couple of weeks ago.

“What we wanted to do was get back to where we were last year. I suppose the pain of the defeat last year is still very fresh. It’ll be all or nothing whether we can get over the line. It’s about putting in a performance to get over the line.

“It’s a massive commitment and we’re in our fourth Ulster final. For myself and some of these players, it’s a fifth Ulster final if you include the Under-21 group from 2010. It has been a very special journey. The reason we’ve been in the five finals is because of the players. From day one they’ve given it everything, they’ve worked very hard and been very focused.

“The dedication and the sacrifice that’s expected from an intercounty player is huge. When you are working hard and putting your social life on hold and sometimes your family life on hold, the one thing that you would hope for then is that would result in performances and success.

Malachy O’Rourke will have Kieran Hughes and Dermot Malone available after their recent injury troubles, but Owen Lennon remains ‘touch and go’.
There were words between these camps in the aftermath of last year’s final, particularly surrounding a game-ending hit by Stephen Gollogly on Mark McHugh. This week, O’Rourke refuted a suggestion that his team was ‘dirty’.

He said: “We bring a work-rate, high intensity. We like to bring a physical edge that way, but we feel in no shape or form would we be dirty or playing the edge really or anything like that.”

McGuinness has a selection dilemma, but it’s a much healthier one than last year. Karl Lacey is in flying form and is likely to get the detail of watching Conor McManus, who hit 1-7 for Monaghan against Armagh in their semi-final replay.

Rory Kavanagh, Neil Gallagher and Paddy McGrath have overcome recent injuries to get themselves into contention while minor knocks to Odhrán MacNiallais and Darach O’Connor have healed.

Kavanagh had been Donegal’s most consistent performer during the League, but a red card against Sunday’s opposition, for a moment of madness when he struck Darren Hughes with a boot he was holding, saw him suspended for the Derry game and an abductor muscle injury kept him out of the semi-final.

The St Eunan’s man is back in the frame this week, however. McGuinness said: “Rory hasn’t played any championship football. He’s very disappointed about the red card but he’s hungry and wants to get going. That’s a good thing as well. He’s got that 19-year-old trait just like Darach and them. He’s a top class footballer and a very important player for us. He’s been sitting on the sidelines chomping at the bit.” 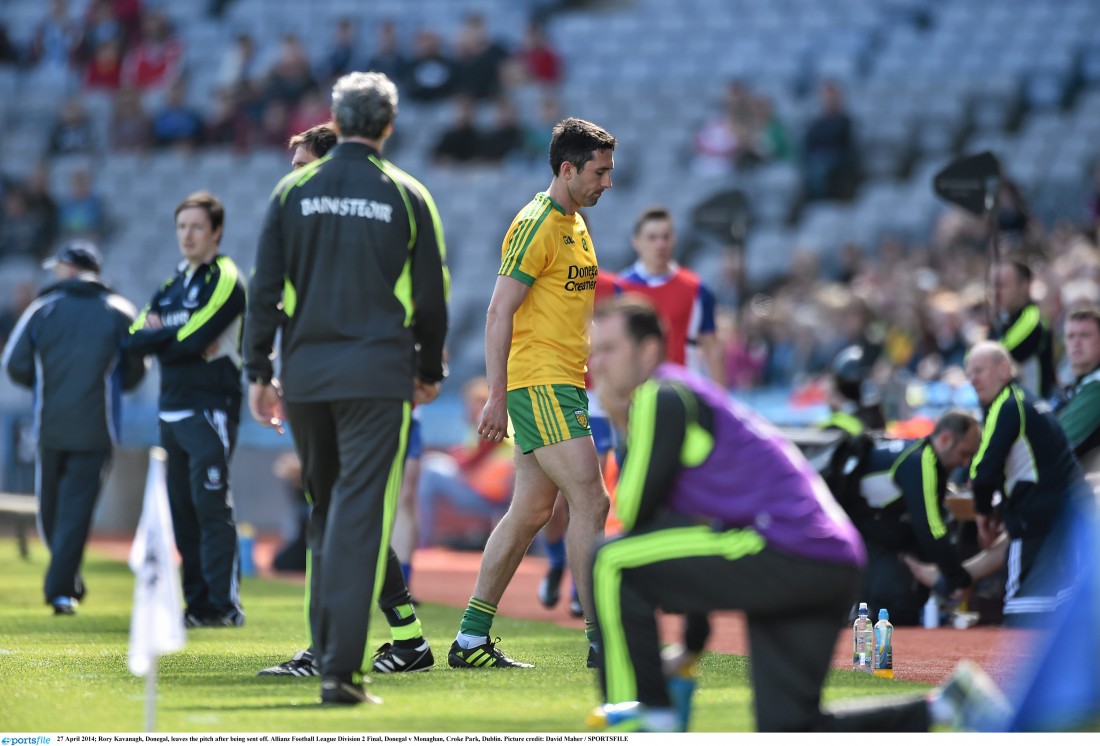 Christy Toye will make his 50th Championship appearance in a Donegal shirt on Sunday (only Colm McFadden and Michael Hegarty have reached that milestone previously), with the St Michael’s man and his club-mate Martin McElhinney vying for inclusion from the off, as are O’Connor and MacNiallais, who scored a combined 1-6 against Antrim the previous day out. With Leo McLoone in a rich vein of form, having scored a goal in each of the last two Championship games, McGuinness for once has options aplenty.

On O’Connor, MacNiallais and Ryan McHugh’s summers so far, McGuinness said: “It’s been great. They’re carefree in a way. They really want it and are pushing it to not only be in the team but to be team players. They’ve added a nice new fresh dimension. That’s what you want. We wanted to give them a good go at it in the McKenna Cup and the League. They’re comfortable on the ball and that’s what I like.

“We’ll know more after the Ulster final, with the packed house and a cup sitting up there. They’ve done well up to now.”

Up top, Donegal’s inside line of Michael Murphy, Colm McFadden and Patrick McBrearty have yet to fire. Of the three, McBrearty’s place could be in some jeopardy, while hopes are high of the trio finding their shooting boots to go along with the scorers who shot 3-16 against Antrim.

If they add another Ulster title on Sunday, this team will have added to their dynasty.

“We don’t worry about the legacy,” insisted Murphy.

“You’re so immersed in the day-to-day that you don’t have any time to wallow in the legacy, to comprehend it.

“We’re just immersing ourselves in playing and winning.” 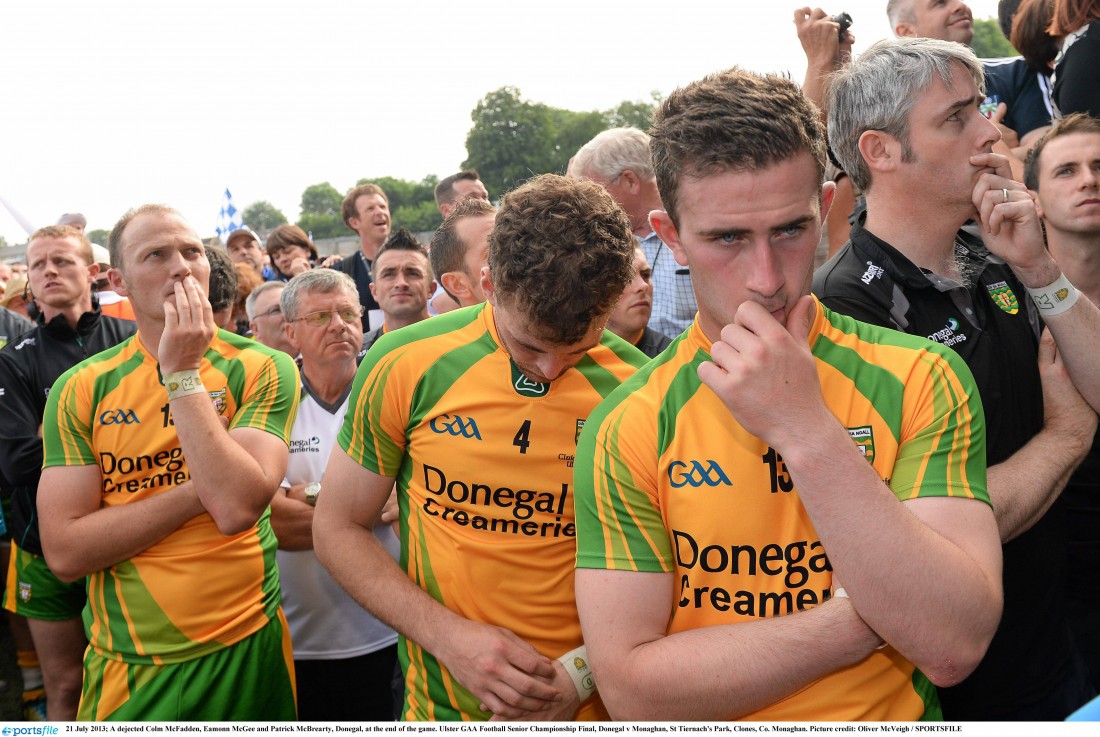