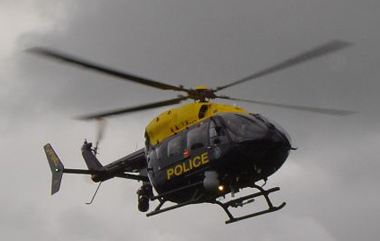 By Cronan Scanlon
A PSNI helicopter and two civilian aeroplanes assisted Gardai during a major search operation along the border last week which resulted in two suspected burglars being arrested and brought to court.

Details of the dramatic ground and air operation only emerged at Letterkenny District Court this week where two Stranorlar brothers appeared in handcuffs.

Eddie (30) and Stephen Crerand (32) of 16 Strath Aoibhinn, Stranorlar, were charged with alleged trespass as well as the theft of two sets of keys and a children’s football from properties in Craigadoos and Whitehill, St Johnston, last Thursday, July 17.

A third suspect, Eamon Lynch (39) of 63 Glentain Manor, Letterkenny, failed to appear in court and a warrant was issued for his arrest.

The court heard that Gardai received reports of four crimes carried out at homes in the area on the night in question.

Following one attempted burglary, a number of local men saw three suspects fleeing through nearby fields and discovered items stolen from one house nearby.

“Gardai were on the scene within a very short time and a large-scale ground search involving quite a number of officers got underway immeditely,” Det McGonagle said.

“We were assisted by the PSNI helicopter on the northern side of the border as well as two civilian light aircraft which were owned by locals. We searched for eight-and-a-half hours but no one was found.”

However, he added, at 2:07 am the following morning, the two Crerand brothers were arrested after exiting a field. Both were “muddy, soaked and dishevelled,” the court heard.

“There were two civilian aeroplanes overhead and a PSNI helicopter was flying up and down the border looking for them as well as a lot of Gardai on the ground,” he concluded.

Judge Kelly said that he was refusing the bail applications.

He remanded both men in custody to appear at last Friday’s sitting of Harristown District Court at Castlerea Prison where it is expected Gardai will apply for a lengthy adjournment while awaiting directions from the Director of Public Prosecutions (DPP).