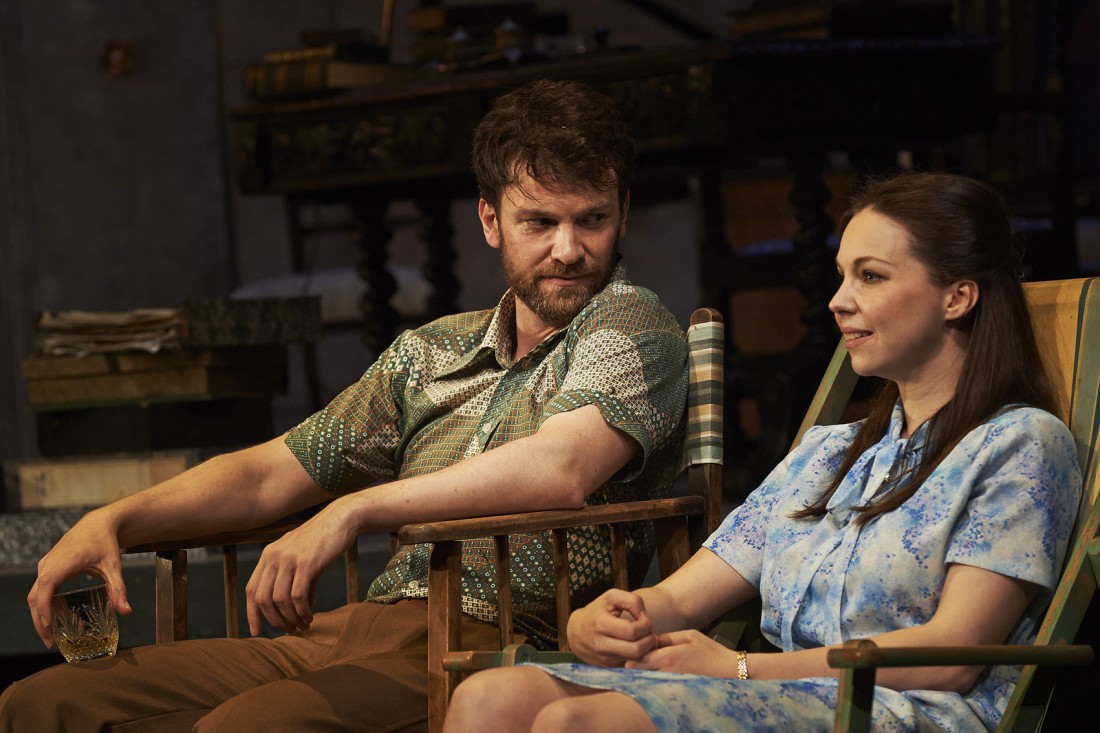 WITH Brian Friel’s Aristocrats opening at The Abbey Theatre in Dublin last weekend, we caught up with the two Donegal actors involved in the production.

Aristocrats, about the once powerful aristocratic O’Donnell family of Ballybeg, premiered on the Abbey stage 35 years ago in 1979.
Patrick Mason directed the Abbey Theatre’s 1990 production of Friel’s acclaimed Dancing at Lughnasa which toured to London and the US, winning several accolades, including an Olivier award and three Tony awards.

For this latest Abbey Theatre production, he collaborates with a dynamic ensemble of ten actors which includes two talented Donegal natives, Keith McErlean from Carndonagh as Eamon and Ruth McGill from Ardara as Anna’s Voice.
Although he might be best known to the general public for his many television roles, Keith began his acting career on the theatre stage.

Having studied acting at The Gaiety School Of Acting in Dublin, graduating in 1998, Keith’s first job was in fact at the prestigious Abbey Theatre.
“Although the role was only small, it was an amazing experience for me to be able to sit in the wings and watch the country’s best do their thing,” he said.

Over the next five years, Keith spent most of his time working at either The Abbey Theatre or The Peacock Theatre. Being back at the national theatre this summer is very special for him. “It’s ten years since I last worked at The Abbey which was the theatre’s centenary year.

“It’s also seven years since I was in a theatre production at all and it’s doing a Friel play set just 20 miles from Derry in Donegal, so as an Inishowen man it’s very special for me.”

This is only the second time Keith has taken on a role in a Brian Friel playing, having been part of the Abbey’s production of Making History.
He said: “I would love to do other Friel plays; I think I might be too old to play one of the boys in Philadelphia, Here I Come, but there are so many other great plays, he’s an incredible writer.”

Keith met Friel briefly during the production of Making History, but is very hopeful that he will come to see the current production of Aristocrats in The Abbey.
Keith said he is really enjoying being back at the famous theatre and said there is a real ‘family vibe’ amongst the cast. “I’ve been living in London for the past seven years so I’m out of touch with the upcoming theatre talent, like Ruth (McGill), so it’s great to get to know everyone.

“It’s kind of ironic that I moved to London and invariably got a lot of work back home; I think you become more exotic when you move abroad,” he laughed.

Having spent so many years working in television and film, Keith said he is delighted to get his ‘theatre muscle’ worked again. “I am really hoping to do theatre at least once a year from now on if the right role’s come up.
“The theatre muscle is one that really needs to be exercised. Actors talk about becoming ‘rusty’ so I think being back on stage will really help me once I go back to television/film.”

Keith has also stepped back into film work and co-stars in the road movie Blood Cells alongside Barry Ward (Jimmy’s Hall) and Hayley Squires. Directed by Luke Seomore and Joseph Bull, Blood Cells will premiere in Venice, Italy, this August. Before he heads to the premiere though, Keith hopes to get a few weeks off relaxing in his native Carndonagh. 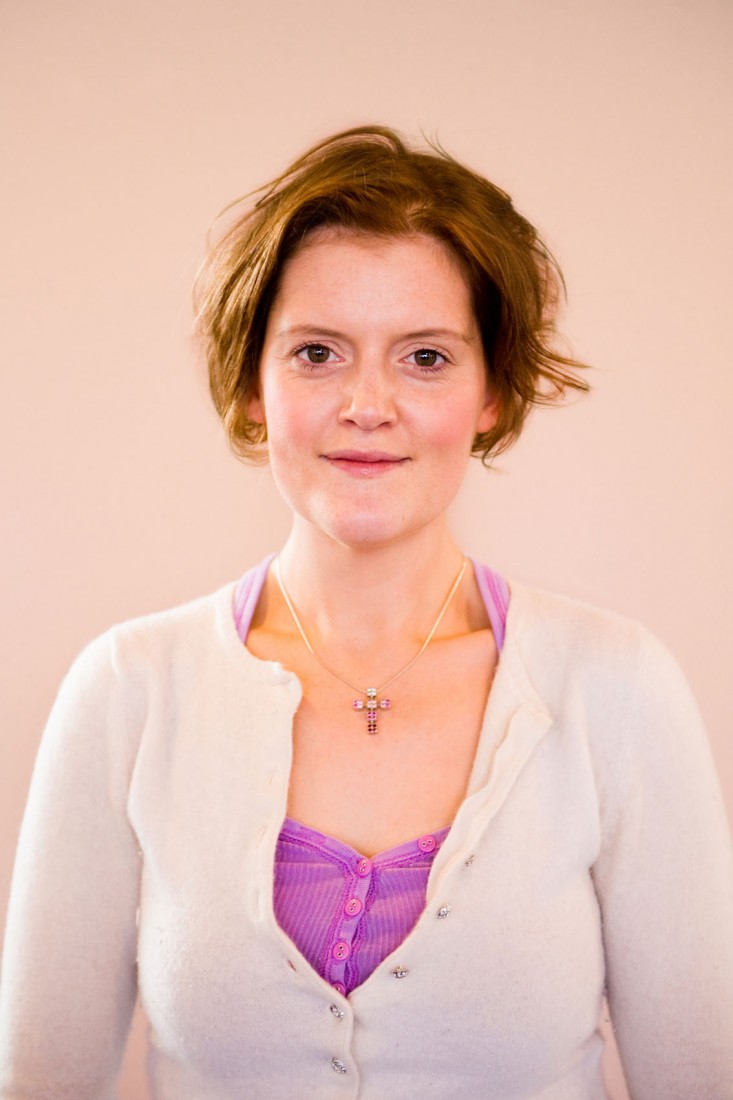 Ruth McGill has a long-standing relationship with The Abbey which she very much considers an artistic home. Aristocrats is the third Abbey production Ruth is involved with, following Alice In Funderland (2012), Shakespeare’s Twelfth Night which closed in May.

Although on this occasion Ruth is not directly involved in the production, having taken on the voice-over role of Anna, who does not appear physically in the stage production.

“I think I am glad I didn’t read the full script before I did the voice-over for Anna as she doesn’t actually know what is going on at home when she is speaking and that meant I didn’t tend to labour lines knowing what was coming in the story.”
For a change, Ruth got the opportunity to sit in the audience on opening night and said the production sent shivers down her spine.

She said: “It’s a beautiful production and very poignant and even very telling of the Ireland today. There’s one line Keith’s character gives, speaking about how the Irish always want to be in the big house instead of the gutter and it gave me shivers.”

Despite being set in Donegal, Ruth said Aristocrats is very different from Friel’s other play such as Translations or Philadelphia, Here I Come. “They are not the usual characters and much more upper class and so they’re accent aren’t really Donegal accents either.”

Also a very talented singer to boot, which also gives her a lot of stage work in musicals such as Alice in Funderland, Macbecks at The Olympia (2009) and Bertolt Brecht’s Threepenny Opera at Dublin’s Gate Theatre (2013), Ruth is also busy performing in other musical projects.

Recently she formed the group The Evertides (www.facebook.com/evertides) with two friends, an instrumental and vocal trio inspired by three-part harmony and folk song reinventing classics, unearthing hidden gems and bring their own original music to life. She said: “My friend Ruth (Smith) from Galway was coming home from London and so we decided to form a group with our other friend Alma Kelleher, a sound designer from Kerry.”

The Evertides
The Evertides began their career with a concert for friends before Christmas, two further gigs around Valentine’s Day and more recently performing in Dublin’s Peacock Bar. “The group has rapidly grown in that we nearly have a full set of our own songs. We all have a huge love of music and it has all fallen into place very naturally; it’s very exciting.”

The differing work schedule, in comparison to theatre work, has also allowed Ruth to spend a lot more time with her seven-year-old song Charlie, much to his delight.
“It’s lovely to have a break from theatre, you need to have other things to do as well, besides acting and hopefully we can come to Donegal for a gig very soon.”