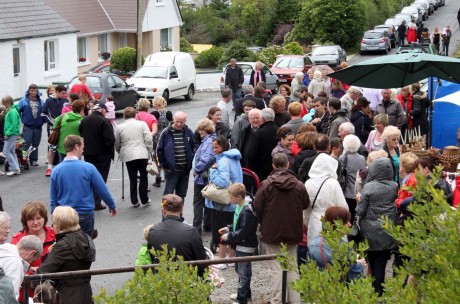 Aonach Jack is a century old fair in Meenaleck.

A CENTURY old fair which was revived in the Rosses four years ago in a bid to raise the community spirit, will once again take place in Meenaleck, Crolly, on Saturday, July 12.

Aonach Jack (Jack’s Fair), founded around 1850, was a popular annual event until it ceased some years after World War II and although the fair has been taking place every few years since the 1980s, locals got together this year in a bid to make it an annual event again.

Following on the success of the event over previous years, which saw hundreds of people flock to Meenaleck every summer for Aonach Jack, dozens of stalls, farm animals and children’s entertainment will once again be on display at the fair held outside one of the country’s most famous pubs Leo’s Tavern, home of Clannad and Enya.
The fair focuses on handmade arts and crafts and local produce and Aonach Jack has attracted crafts from people all over the county and further afield.

There will be fun for children, including bouncy castle, face painting, horse and cart rides, Ice cream, candy floss farm yard animals and also fortune telling. And there will be outdoor music -a street session – to add to the atmosphere. Aonach Jack takes place from 11am to 5pm.

Some of the music for the weekend will include, the fabulous Aisling Jarvis and friends, as well as the talented Shenanigans with surprise guests dropping in throughout the weekend.

Moya Brennan has confirmed she will be there all weekend so no doubt she will also give visitors a song or two, while on Saturday night there will be some special guests from Japan.

But the weekend’s festivities in Meenaleck will already begin on Thursday evening at 6pm when the weekend the Cullodeen Ceili Band performs at the world famous Leo’s Tavern. So get yourself down to Meenaleck this weekend.

IT was a day of spraoí, craic agus ceol on Monday as crowds turned out in Crolly to...