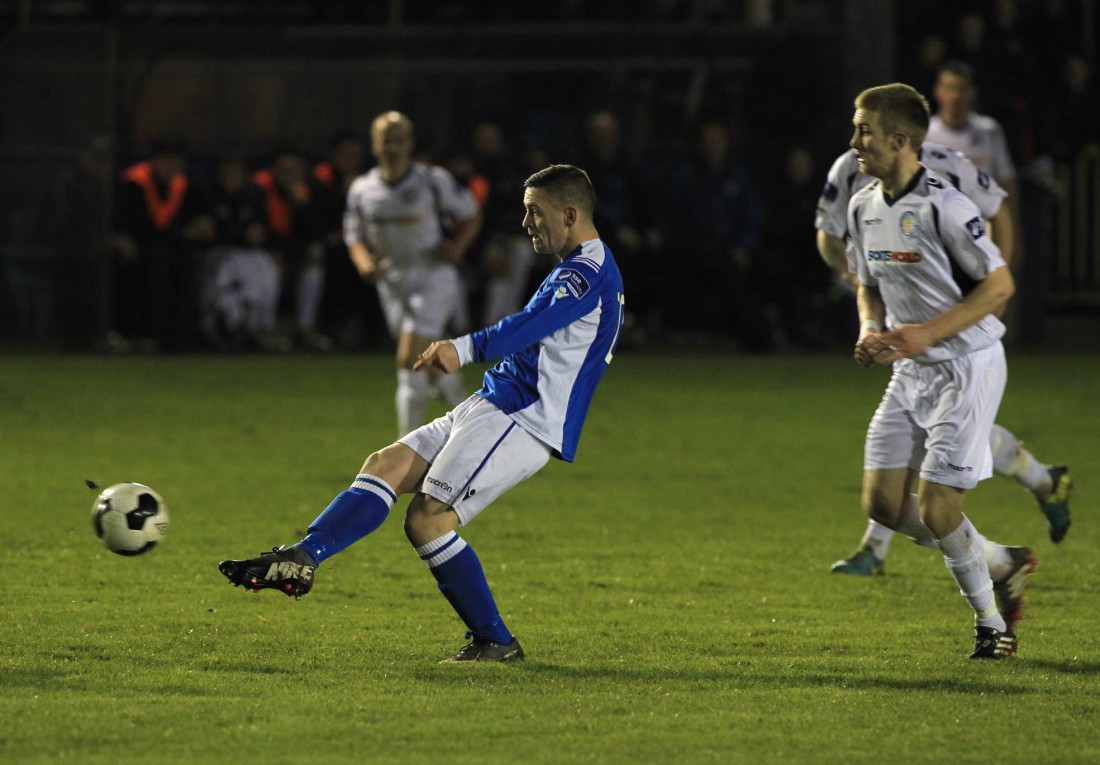 OLLIE Horgan is hoping that captain Kevin McHugh can rediscover his magic to find the goals his Finn Harps side so desperately crave between now and the end of the season.

Harps welcome third-placed Galway FC to Finn Park on Friday night (kick-off 8pm) for a game that Horgan’s men need to win to stay in touch with the promotion chasers. Harps enter the game six points behind Galway and, given the mathematics of it, defeat would put a massive dent in their play-off hopes.

Harps have lost just once in their last nine outings – a 1-0 defeat to top-of-the-table Longford Town – and have kept four clean sheets in their previous five games. Horgan’s problems are in the goalscoring department.

McHugh and Sean McCarron hit 21 goals between them last season, but injuries have meant they have been crossed absent for large swathes of this campaign and have managed just a goal each.

McCarron is cleared of suspension for the meeting with Galway’s but the Derry native is unavailable because of a back injury that has kept him out of training this week. Caoimhin Bonner is also out of contention. Bonner was forced off injured just five minutes into the second half of last Friday’s 0-0 draw with Cobh Ramblers after sustaining what Horgan termed ‘a bad slap to the knee’.

Bonner has not trained since and will miss out. Josh Mailey and Michael Funston miss out because of suspension and Horgan himself is expected to observe from the press box after being handed a two-match touchline ban by the FAI.

The Harps manager remains on the hunt for additions to bolster his attack but has ran into nothing but cul-de-sacs.

“I’ve spent the last week trying to get one or two forwards in on loan, but we have had no success,” Horgan said this week.

“The options dried up at the start of the month, they resurrected themselves again but they’re not happening now. We just have what we have.

“I don’t see how or where we can get anything of an experienced nature. The other side of it is that Kevin McHugh possesses serious quality and I’m hoping that he can find a spark again.

“It’s my problem to go and get a forward in. I didn’t expect Marc Brolly to leave before playing a game and I thought that Ruairi Keating was staying until Sligo took in the new manager and he wanted him back. That left me high and dry but I do think that Kevin will get us something between now and the end of the year.”

Darragh Black energised Harps as a sub last week, but Horgan insists that supporters should be cautious.

Horgan confirmed that midfielder Ger O’Callaghan has joined the club. The former UCD player, a midfielder, was most recently on the books of Enniskillen Town. An international clearance has been processed but the Monaghan native is sidelined for the next couple of weeks because of a hamstring problem.

Horgan said: “Ger is a good ball player and a good lad. Our concern at the moment is signing a front player, but Ger will be to good signing for us.”
Horgan held talks with former Derry City striker Stephen O’Flynn, but he is unable to play League of Ireland while Conor Harkin – who is on Derry’s books – is understood also to have turned down the chance to move to Finn Park.

Harps’ next four games see them take on each of the First Division’s top four teams.

Horgan said: “In the next two games – against Galway and Shelbourne – we will be playing the best two attacking teams in the League. For me, Longford are the best team overall and will win it but the other two aren’t far away.”

Galway recently released St Johnston man and former Harps player Shane McGinty, but have taken in Enda Curran who had been with Derry.

Horgan said: “Galway are the best attacking side in the league with a wealth of options in Vinny Faherty, Jason Molloy, Gary Shanahan, Ryan Manning, Jake Keegen and Enda Curran. Ryan Connolly is one of the best midfield players in the league so we will have our work cut out

“In many ways they have too many, but then have we something to match that?

“We will prepare as well if we are in the mix or not. The attacking quality of those teams in comparison to us is chalk and cheese. Ruairi Keating kept us in it up until now but there he is away to Rosenberg with Sligo this week.

“We need a result on Friday regardless of dropping points against Cobh but we need to create more in attack and deal with an excellent attacking threat that Galway will take with them.

“We will be preparing for every game as well as we did for our first game of the season regardless if we are in the promotion shake up our not.  I have never said that we would or wouldn’t be involved in the top half of table, except that we will approach every game as important as our last.”

Galway boss Tommy Dunne has his eyes on a push for promotion and his side head north-Weston the back of a highly-encouraging 5-0 win over Shamrock Rovers B.

Dunne said: “We go to Finn Harps next, which is another huge game. We’ve got to try and get our points tally from the last phase of games but we’re playing catch up..”

“We’ve got to try and go to Finn Park and win, we know Finn Park is a difficult place to go but we’re on the chase. We’re hungry to get up the table and we’re not ruling out anything. We’ve got to play Shelbourne twice, Longford once, but lets look at the next game coming first. I still think we need to tighten things up. If we do, I think we can give anyone a match.”