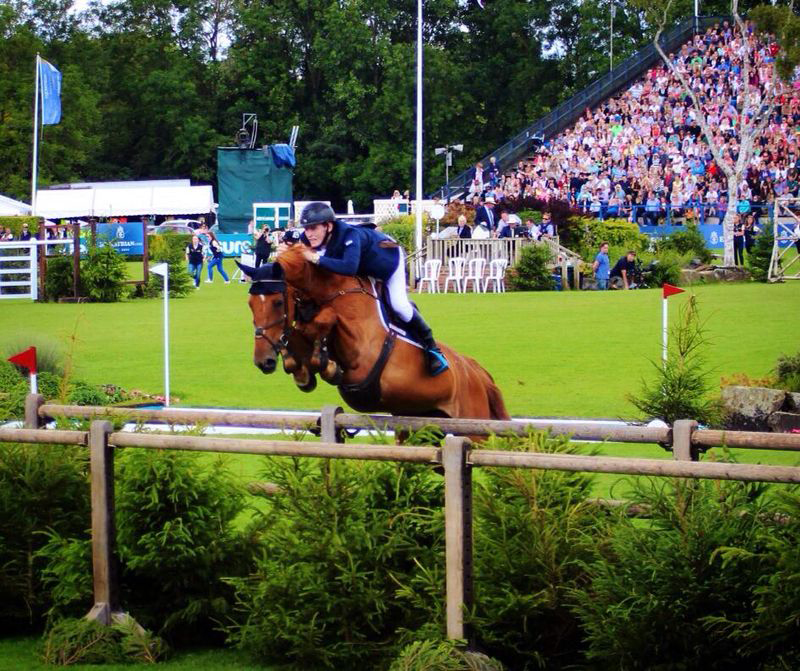 Daniel Coyle on board Zuidam at Hickstead.

THERE were scenes of great celebration at the Ballyheerin Stud Farm in Fanad last weekend after Derry showjumper Daniel Coyle won the Tom Hudson Derby Trophy at the Derby Meeting in Hickstead, England.

The Ballyheerin Stud Farm was founded in 2002 by John D Carr. Along with his sons Michael, Danny, Paul and John junior, John D (75) helps look after around 200 horses around the Fanad peninsula.

“We have created an ideal environment for our horses including extensive stables, loose sheds, isolation stables, a horse walker and sand arena,” Carr said. “We have tried to create an environment were outstanding stallions can breed with exceptional broodmares to produce optimal offspring.”

Their horses have competed in some of the top dressage, eventing and showjumping competitions, including last weekend’s Hickstead Derby meeting.

As well as Zuidam, Ballyheerin Stud Farm has also had success with Isabelle Argentina, NC Amiro and Candido Z and Fanad native Sharon Callaghan had previous success riding for the Ballyheerin stable.

Mr Carr said: “Our horses are reared in the most natural surroundings, grazed on rolling paddocks allowing them to develop and flourish under our watchful eyes.”

The win for the Ballyheerin-bred stallion was one of four Irish wins in Hickstead.

Trevor Breen, who won the coveted Hickstead Derby Trophy aboard Adventure de Kannan on Sunday, also competed in the jump-off, but it was Coyle on Carr’s Zuidam that took the win.

Coyle and Zuidam are now in line to compete in an international competition in Italy in the coming weeks, with Irish show jumping manager Robert Splain to select a team to take part, while the Dublin Horse Show at the RDS in early August could also give the Ballyheerin Stud Farm another chance to shine on the big stage.

A few weeks ago, Coyle and Zuidam came second in the TRM National Grand Prix at Ravensdale and the recent success has been a fine fillip for the Carrs.