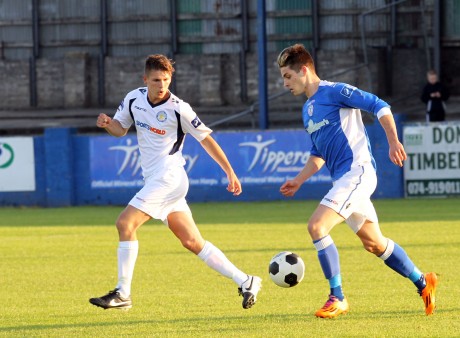 Ruairi Keating in action against Waterford United two weeks ago. The striker will not be returning to Harps.

IN THE space of an hour last Friday, Ollie Horgan’s attacking options suffered two hammer blows, with the result that the Finn Harps manager is now ‘down to the bare bones’ as they prepare for the visit of First Division bottom side Cobh Ramblers to Ballybofey on Friday night (kick-off 8pm).

Horgan received a phonecall on Friday evening confirming that Ruairi Keating’s loan move from Sligo Rovers would not be renewed for the second half of the season. The Mayo native netted six goals in fourteen appearances for Harps and had been the bright spark of the season.
However, the 18-year-old striker has gone back to Sligo, for whom he played as a substitute in Sunday’s scoreless draw against Cork City, and will remain with the Bit O’Red.

An hour after learning that Keating was no longer part of his plans, Horgan took a call from Marc Brolly, who informed him that he had decided not to make his return to Harps, despite having been in training with the club in recent weeks and even though an international clearance for the Strabane man was in the middle of being processed by the Football Association of Ireland.

Brolly was set to return for a third spell at Harps, but the player – most recently of Dungannon Swifts in the Irish League – has decided to renege on his agreement with Horgan, citing a change in his personal situation as the reason for his decision.

“I lost Marc Brolly and Ruairi Keating on the one day,” said a disappointed Horgan this week.

“Ruairi played a game for Sligo on Saturday and scored a hat-trick. John Coleman took him with the first team on Sunday and he won three headers at the back post which created chances so he’s been impressed. He’s staying with Sligo now which is disappointing because I felt staying with us until the end of the season would have done the lad the world of good.”

Horgan had been hoping to use Keating and Brolly either side of Kevin McHugh in the uppermost line of a 4-3-3 formation, but he’s had to score a line through that particular plan. Given that Sean McCarron and Michael Funston are both suspended for Friday’s clash with Cobh following their red cards against Shamrock Rovers B in Tallaght on Sunday, Horgan is running low in options to spearhead his attack.

“We’re down to the bare bones with very little options and we have fourteen games to go,” the Harps manager said.

The situation regarding goalkeeper Mark Anthony McGinley is unclear with the Creeslough man yet to commit to Harps, although he is out of action because of facial injuries at present while Mark Forker has left the club.

Horgan hopes to have added Thomas McMonagle to his squad in time for this week’s game. The Burnfoot man was on Harps’ books last season and had a spell with Temecula FC in California, USA. A pre-season trial at Derry City didn’t lead to a contract at the Brandywell and the defender, who can play in the middle or at left-back, will now rejoin Harps’ squad, pending the arrival of international clearance.

“I am down to having a panel of nineteen players and, hopefully, Thomas McMonagle will take that number up to twenty,” confirmed Horgan who will also add midfielder Gerard O’Callaghan to his ranks.

The 26-year-old from Clones played for Harps in a 2-1 pre-season win over Drumkeen United and impressed that night. He has played in the First Division previously with UCD.

Horgan said: “Ger’ is a great kid who has a great attitude. He is travelling up twice a week from Clones. He fits in like a glove. Hopefully he’ll be a good addition to us.”

Horgan himself will watch next Friday’s game against Galway from afar, with a touchline suspension winging its way from Abbotstown’s Disciplinary Control Unit following his own sending off on Sunday in the 1-0 win over Shamrock Rovers B. Josh Mailey’s yellow card in that game means that he has triggered a one-game suspension having accumulated four bookings and will be sidelined for the Galway match.

Keith Cowan, who proved to be Harps’ match-winner with a ninth-minute winner on Sunday, remains one booking away from activating a similar punishment.

“Cobh is a massive game for us and Galway the week after will look after itself,” Horgan said. Cobh claimed their first – and only – victory of the season so far with a 3-0 success over Shamrock Rovers B two weeks ago.

Although they lost last week, 2-1 at Wexford, they are said to have pushed them all the way. With a number of new faces in their ranks, Horgan expects a tricky test from the southerners this week. Harps defeated Cobh 5-0 in Ballybofey in March and won 2-0 away at St Coleman’s Park in May.

Horgan said: “Wexford seemed to be hanging on a bit against Cobh and that game was in Wexford, which is a very difficult place to go for any team. Cobh also beat Shamrock Rovers and they have about eight new faces in since the break. They will be effectively a new team.”

His own team have followed the Horgan template perfectly in the last two games, two one-nil wins over Waterford and Shamrock Rovers B ground out of a sheer refusal to buckle.

The Harps boss said: “We won two games there out of pure stubbornness. We had great spirit and great attitude; to be fair to the lads they have broken their backs to get those two wins.”