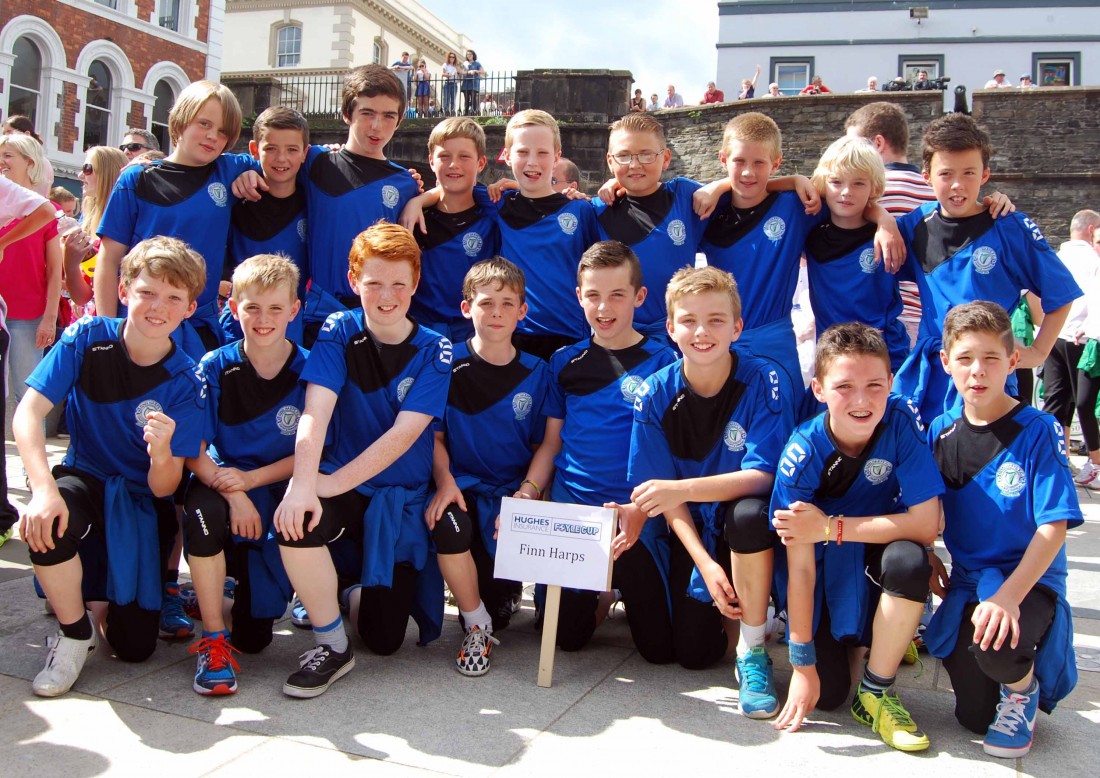 Several Donegal teams were among the top performers in the early rounds of the Hughes Insurance Foyle Cup this week, and with games continuing until Saturday hopes are high that some silverware will make its way back across the border.

Donegal Schoolboys had teams in the U12, U13, U14 and U16 sections, with the U12s and U13s comprehensively topping their groups.

The U14s went into the last round of group games yesterday (Thursday) at the top of their group too and looked to be on course for a quarter-final clash with Celtic at 5pm today (Friday).

Finn Harps were also in with a good shout in the U14s, heading into their last group games yesterday afternoon joint top of their group with Maiden City.

A win for the Donegal Schoolboys U16 side against bottom of the group Cairniny Youth yesterday evening would also see them progress as group winners to the quarter-finals.

In the U11 competition where there were lots of Donegal teams competing, a very impressive Letterkenny Rovers side were the only team to take maximum points from the group stages. As a result they were seeded straight to the semi-finals where they were due to meet either Dungannon or Coleraine yesterday afternoon.

Kilmacrennan Celtic were also impressive in the U10 competition, winning four of their five games to top their group to progress to a last sixteen place against Ballymoney United.

Finn Harps were pipped only on goal difference by Arklow Town to finish as runners-up in their group at U15, progressing to the quarter-finals of the Plate competition where they were due to meet Coleraine.

Harps were the only Donegal side in the U17 competition but luck wasn’t on their side and they moved into the Plate competition, while Harps U19s fared best of the Donegal sides in that competition, progressing to the Plate quarter-finals where they were due to meet the Inishowen Youth league last night.

Fanad United and Letterkenny Rovers finished bottom of their groups and were due to meet in the Quarter-Final of the Foyle Shield.

There wasn’t much joy for Lagan Harps ladies either as they lost the first of their two group games before recovering with a victory over Derry City, but the Donegal U13 girls team were in fantastic form.

They smashed in the goals as they cruised to the top of their group and if they could negotiate a semi-final against Greencastle yesterday afternoon, looked on course for a place in the final – probably against the Inishowen Youth League girls.

Other impressive group finishes from Donegal teams saw third place group spots clinched by Buncrana Hearts and East Donegal Colts in the U10s, while in the U11s the Inishowen Youth League topped their group with the Inishowen Colts taking second in theirs.

Donegal Town were very impressive in their group and unlucky to be pipped for third spot on goal difference.

In the U12s there were fantastic displays from the South Donegal team who went unbeaten in a tough group that included TW Braga, clinching second spot and a place in the quarter-finals of the Plate against Sion Swifts.

Swilly Rovers also finished second of their group in the U12 competition, behind the Donegal Schoolboys and their quarter-final opponents were Oxford FC. while Kildrum Tigers who finished third in the South Donegal’s group, progressed to meet Inishowen Youth league.

Drumkeen United were in second spot in their U16 group as they headed into their last group game against St Patrick’s of Castlederg yesterday evening but looked likely to be heading for the Plate Semi-Finals.

Of course Drumkeen has also been one of several Donegal venues for games this year with matches also played at Greenbrae in Lifford and at The Boathole in St Johnston as well as in Killea, Aileach, Buncrana, Greencastle and Cockhill.

With games yesterday and today, the final pairings for the various cup, plate, bowl and other competitions will be known later this evening, with Donegal teams hopeful of making many of the important deciders.

All fixtures and results can be found on the Foyle Cup website at foylecup.com and the tournament also has a free android and apple app available to download.