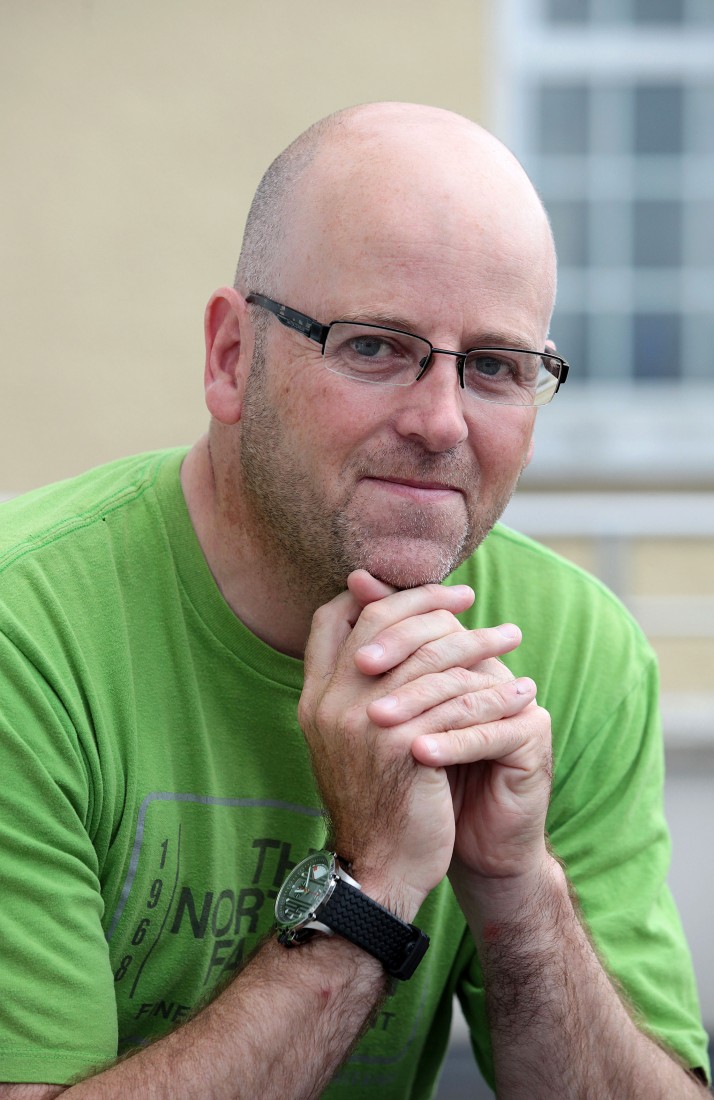 BY HARRY WALSH
SIX years ago, Mark McCollum, a 47-year-old father of two young girls was informed that, without surgery, he had only weeks to live.

It was January 6, 2008, and the Raphoe native had just embarked on his daily swim in the chilly waters off Portnablagh pier. However, on this occasion, he knew that something was not quite right.
A quadruple heart bypass followed less than two months later while, more recently, his right leg has had to be rebuilt on three separate occasions.

That was four years and thousands of miles ago. Last weekend he was one of 250 swimmers who participated in the annual Warrior of the Sea challenge from Rosses Point to Strandhill. To cap a great day, Mark was presented with the Paul Rennick Memorial Trophy – a special achievement award.

Earlier this week, the Donegal News spoke to Mark about his personal journey – a journey which has seen him run a full gamut of emotions: shock, anger, confusion and, ultimately joy – these past few years.

A former co-ordinator of The Voice of Older People Project, Mark, who lives in Mullagheep near Ramelton, is currently taking an M. Litt through Research.

“I love swimming. It’s what I do and in a roundabout way it was swimming that saved my life,” he recalled.

In the early days of January 2008 he was out on his daily swim off Portnablagh when he felt out of breath and he turned and swam back to shore. When he got back to the pier, although he didn’t know it at the time, he was faced with a life changing decision.

“It was a case of do I ring the doctor here or just go on home. The Christmas tree was due to come down that day and I had things to do but I decided to ring NowDOC who advised me to go to A&E for a check-up.

“By now I was feeling fine and, as all the results had come back negative, I thought I would be home in time for lunch. Luckily for me the Consultant on call that day was a Cardiologist who decided to do a few more tests. I was given a stress test – which I failed – and you could have punched me in the face.

“I never smoked, wasn’t overweight, my BMI (body mass index) was perfect, I was doing regular exercise and yet here I was,” he said.

Mark underwent an angiogram which confirmed that he needed a bypass.

“I was told that I wouldn’t see Easter without surgery and Easter was early that year too,” he laughed.

Within six weeks Mark would be taken to St James’ Hospital, Dublin where he underwent a quadruple bypass and there followed a long recovery period.

“I decided I could either sit in the corner and feel sorry for myself or get back on the horse. Needless to say I chose the latter option and it wasn’t too long before I was back swimming with the Letterkenny 24/7 Triathlon Club,” he said.

A fighter, Mark refused to lie down although that is quite literally what he had to do for most of the next calendar year.

“The whole process took about a year. They had to take out the bad stuff and put in a spacer before sending me home for a few months and, when the knee had healed up, they took me back in again to put together the relevant pieces. You could say that my right leg has been rebuilt three times at this stage,” he said.

Slowly but surely Mark got back on his feet once more and it wasn’t too long before he was back in the swimming pool and on the bike.

“The pool and bike were good for me as they’re low impact sports and don’t hurt me too much,” he said.
Today, at 47, he looks the part of the endurance athlete he has become. Slender and fit, Mark took part in last year’s Warrior of the Sea 6k challenge while he also swam out to Arranmore.

“You have to set goals for yourself. This year I decided to do the Warrior of the Sea again and I trained with Karen Crawford, Keith McClean and the 24/7 boys. I was delighted to win the award (Paul Rennick Memorial Trophy) because with beta-blockers and other medication I’m on I will no longer be able to win these races. I can’t find a fifth gear. It’s frustrating at times,” he smiled.

Reflecting back on last Saturday’s swim in Sligo, Mark admitted that he shouldn’t really have taken part as he had an ear infection.

“It was very tough. There were a lot of jellyfish and big swells – two things I don’t like – and it took me two and a half hours which was longer than last year,” he said.

That last response perfectly sums up the competitive nature of the man.

“You’re right. I would like to go back and swim it a bit quicker next year – sure you have to set yourself goals,” he laughed.

Married to Breid (nee Kelly from Glencar) the couple have two daughters, Jade (12) and Lauren (10).
“I think she’s given up on me at this stage,” he smiled.

With that it’s almost time to put on the wetsuit in preparation for the daily swim.

“I spend at least an hour in the water – sure there’s not much point going in for anything less,” he said.

Mark was one of four brave Letterkenny souls who tackled the 6.6km Warrior of the Sea swim last Saturday in Sligo. It involved swimming from Rosses Point to Strandhill – in choppy conditions with two to three foot waves for last 2k leading into Strandhill.

He was joined by Karen Crawford, Keith McClean and Paddy Bond, also members of the Letterkenny 24/7 Triathlon Club.