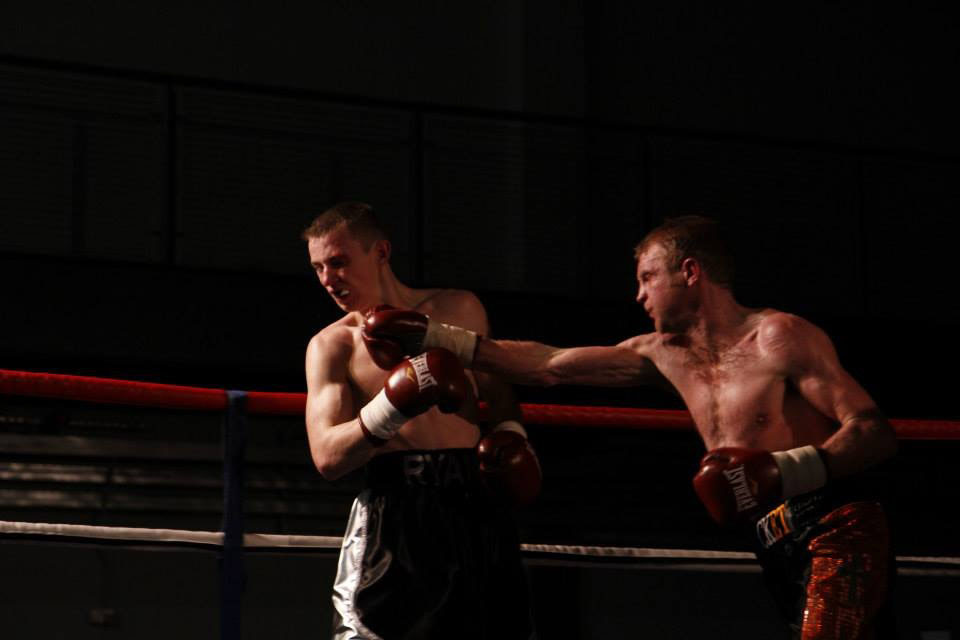 Shaun McShane connects with Ryan Love during their fight in February

SHAUN McShane is confident that he’ll be back to winning ways after drawing with John Green on Friday night.

The 33-year-old light-welterweight had his bout with Green tied 38-38 at the Ravenscraig Regional Sport Facility in Motherwell. In three pro fights, McShane now has a win, a loss and a draw on his card.

“Green came to fight and not to put a loss on his record,” McShane told the Donegal News.

“I could have got a journey man to fight, but I didn’t want that. I wouldn’t get tested to the max doing that. From the first bell to the last bell we traded punches. It was a great tear up; a really hard fight.

“Neither of us gave an inch and we were both hungry for the win.”

Paul Graham of Prospect Boxing felt McShane was unlucky not to have edged it – and the Dungloe man concurred.

“I do think that I nicked it by a round and most people felt the same as I got stronger in the third round,” he said.

“No-one deserved to lose the fight. A draw was probably a fair enough result. We both fought our hearts out.”

A late starter in the professional ranks, Glasgow-based McShane had a winning debut against Ryan Love in February, but lost out to Marek Laskowski in his next contest.

He said: “Everything has come at the right time. I had a good win on my debut and then a narrow points loss. That meant the hype of the big win didn’t go to my head. I’m happy with the record. I have a wee break now to get my knee sorted and it’ll be back to winning ways – I’m confident of that.”

McShane thanked his many supporters and sponsors, who made up a large portion of the 1,000-strong crowd on Friday.

He added: “I’ll be back after the summer.”