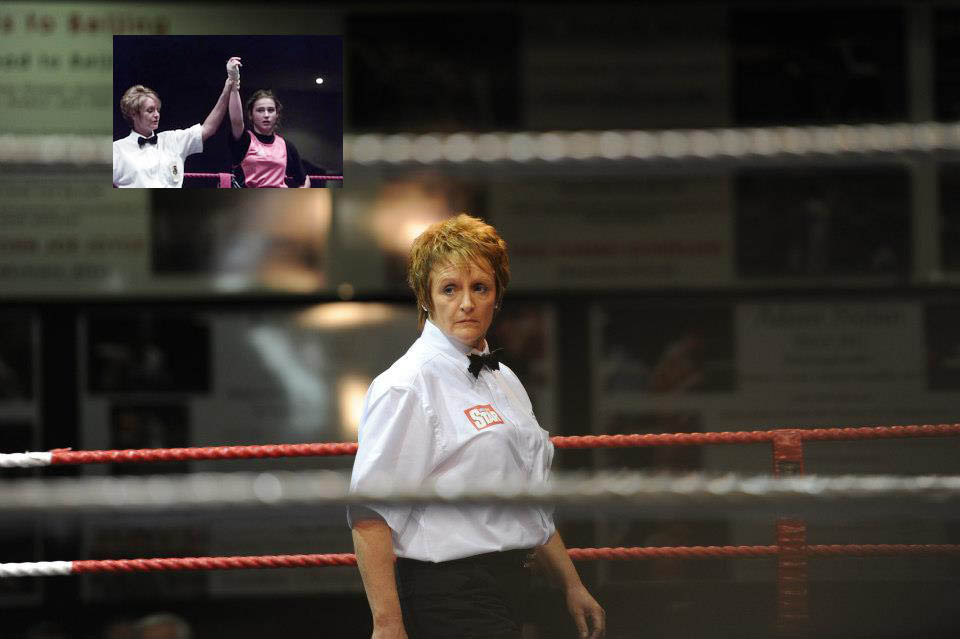 Boxing referee Sadie Duffy and (inset) raising the hand of Katie Taylor after she defeated Alanna Audley in the first officially sanctioned women’s bout ever held in Ireland back in 2001.

HALLOWEEN night 2001 was a watershed moment for Irish sport.

Upon the canvas of the National Stadium in Dublin, two young boxers touched leather for a historic fight.

Cameras flashed to capture the action inside the greying confines of the home of Irish amatuer boxing. For the first time ever, the old place was hosting a bout between two female boxers. The South Circular Road reeks of history; on that night, those inside saw the future.

“It was history in the making,” says Duffy, who last Saturday beamed with pride watching Taylor win her sixth European title in a row with victory over Estelle Mossely of France in Bucharest.

Duffy has been a boxing referee since 1997 and was selected to officiate on that breakthrough night thirteen years ago, making it an all-female cast.

“There were a few hurdles to overcome, like the major one was acceptance,” Duffy says.

“Actually having womens’ boxing accepted was a big thing. Some people that you thought would have been alright about it were the very people against it at the time.

“It was a huge stage for the girls. They were only young girls at the time. It was massive, first of all, because they were there to be criticised. They both stuck it out as boxers, fair play to them.”

Audley had some time out of the sport, but has got back into the ring again. This week she was confirmed – now as Alanna Audley-Murphy – on the Northern Ireland team for the Commonwealth Games in August. The Northern Ireland boxers, including Olympians Paddy Barnes and Michael Conlan, are on a four-day training camp in Duffy’s home town of Buncrana this week.

Duffy says: “Alanna had a bit of a break, but she’s back in action now. She won the Ulster Elite title this year and will make a bit of history now as well with this being the first year of womens’ boxing at the Commonwealth Games.”

Taylor’s star shot to the very top. Now a six-time European champion, she has won four World Championships and in August 2012 she defeated Russia’s Sofya Ochigava 10-8 at an electric ExCel Arena in London to win an Olympic Gold medal. It was largely thanks to Taylor’s earth-shattering exploits that womens boxing even took its place on the Olympic timetable.

“She was always a stand out and has broken a lot of new ground,” says Duffy, who also refereed Taylor when she defeated Julia Tsyplakova from Ukraine at the National Stadium in 2010.

“Katie’s record speaks for itself.

“I remember doing her first fight. It was an entertaining contest. Katie won it deservedly. She was a star even then. She’s moved on leaps and bounds.

“I’ve been at most of the Championships that Katie has been at since then.

“Katie has been excellent. She’s a great role model and all those accolades that she has are richly deserved. She’s a model athlete, so professional in everything that she does. She ticks all the boxes.”

Duffy herself has played a big role in the sport and has taken charge of some of the country’s most high-profile bouts, including the 2011 Irish light-heavyweight final that saw Joe Ward defeat Kenny Egan on a night when Neilstown man Egan was aiming for an eleventh-successive title.

The Illies Golden Gloves woman served as secretary of the European Women’s Commission, but resigned from that role after the AIBA ruled that officers could no longer hold a position on the Commission and also act as a referee/judge.

She says: “We had regular meetings to coincide with major Championships. We met with different people from world boxing and it was all about developing womens’ boxing.”

In the late 90s, there were many at ringside who raised their eye when Duffy stepped between the ropes.

“I adopted the approach of two choices: Take it or leave it.”