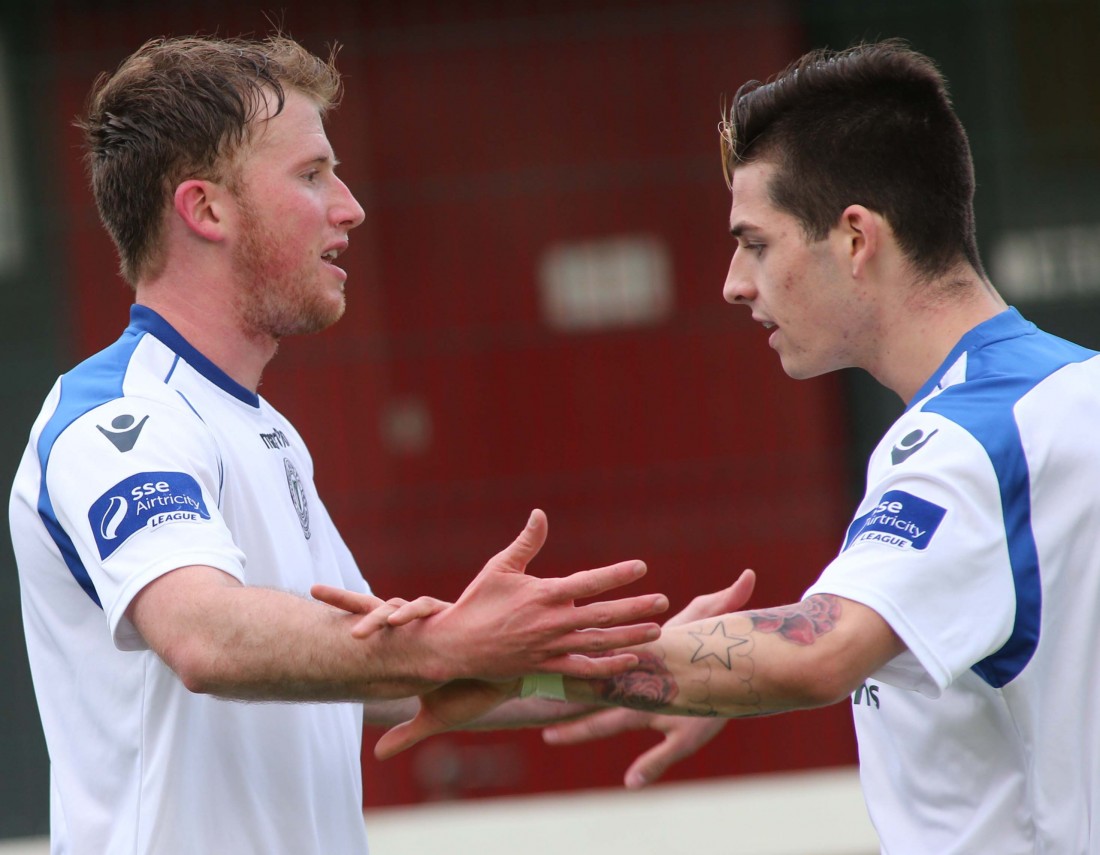 Pat Mc Cann is congratulated by Ruairi Keating after he gave Finn Harps the lead against Belgrove/Home Fam on Friday night in the Ford FAI Cup match between the sides. Photo: Gary Foy

PROGRESSION was the name of the game for Finn Harps on Friday night and, ultimately it was mission accomplished as Pat McCann’s eighth-goal handed Ollie Horgan’s team a passage into the third round of the FAI Cup at the expense of Belgrove/Home Farm.

The Leinster Senior League 1A side proved stubborn opponents for Harps, whose failure to add to McCann’s neat early strike made for a nervous night at the impressive Frank Cooke Park on Griffith Avenue.

Playing against ten men, following Conor O’Keefe’s dismissal in the 18th minute, Harps found the Dubliners hard to break down and clear-cut openings were hard found. Harps were on top and there was the feeling afterwards that a spurned Ruairi Keating chance ninety seconds into the second half was the moment the floodgates could have unlocked.

The longer it went on with only McCann’s goal in the bag, the more tense it became for Harps, who had to endure a little bombardment late in the day as Belgrove/Home Farm headed in search of a replay in Ballybofey.

Harps managed to hold onto their lot and even if it wasn’t their most impressive performance they got the job done and their name will be in the pot for the second round draw.

McCann, Keating and Kevin McHugh – the only survivor from 1999 when Harps defeated Belgrove 6-0 in a replay on their way to the FAI Cup final – all had chances but the Donegal side couldn’t put the tie to bed.

Harps took the lead when McHugh magnificently made space for himself with a clever turn on the edge of the centre circle. His ball through the eye of a needle for McCann was equally impressive and the American’s finish was coolly executed, sliding beneath goalkeeper Andrew Jones to give Harps a foothold.

When O’Keefe was sent off for apparently being somewhat over-zealous in a challenge with Ciaran Coll, the Leinster Senior League outfit were facing a mountain to climb. O’Keefe’s was a rash tackle on Coll and while the home contingent had felt aggrieved, the right-back did go over the top and Simon Rogers, the referee, was quick on the draw with the red.

With Harps’ list of absentees including Sean McCarron, Josh Mailey, Michael Funston, Shaun Patton and Jonny Bonner, Horgan had to do a bit of rejigging. Conor Winn returned in place of Leaving Cert student Patton in goal, while there were rare starts for Gareth Harkin and Graham Fisher.

Both acquitted themselves well on the night. Although their involvement was sporadic, they could be content with their contributions.

The hosts were missing a handful of their own regulars – with former Longford Town centre-back Paddy Collins among those unavailable to Danny Crowley – but they fired the first warning shot of the night.

Just four minutes in, Stephen Doran’s low effort from 20 yards was rolled wide of Winn’s right-hand post after Damien McNulty – with his head heavily bandaged to protect a deep head gash, sustained in last week’s game against Wexford, that required staples – won a challenge on the edge of the area.

When McHugh slipped McCann through and he finished his fifth of the season, Harps could dictate, but even when O’Keefe walked the long walk ten minutes later, they couldn’t carve another incision.

McHugh tested Jones with a daisy-cutter and McCann drilled wide after McHugh rolled a free-kick into his path.

As the first half drew to a close, Harkin was presented with an opening, but a deflected effort was bread and butter to Jones.

The chance to copper-fasten the win arrived with the second half only ninety seconds old. Coll’s forward header was misjudged by Belgrove/Home Farm defender Warren Taylor, allowing Keating line up the shot.

The angle was tight for the on-loan Sligo Rovers, but a curling effort between Jamie Smith and Jones looked destined for the back of the net, only for it to shave the wrong end of the post.

Keating had Harps’ best chances of the second half. Seventeen minutes from time, Keating was denied by Jones, who got down low to make a save, while the lively front man came close again soon after again. Leaning backward and under close scrutiny from a glut of Belgrove/Home Farm bodies, his effort was always rising and Jones was content to watch it fly over.

The home side forced a series of corners and frees as the clock ticked towards the end. There was always the feeling that they could snatch a draw. Harps rolled the sleeves up and held out to progress into round three.