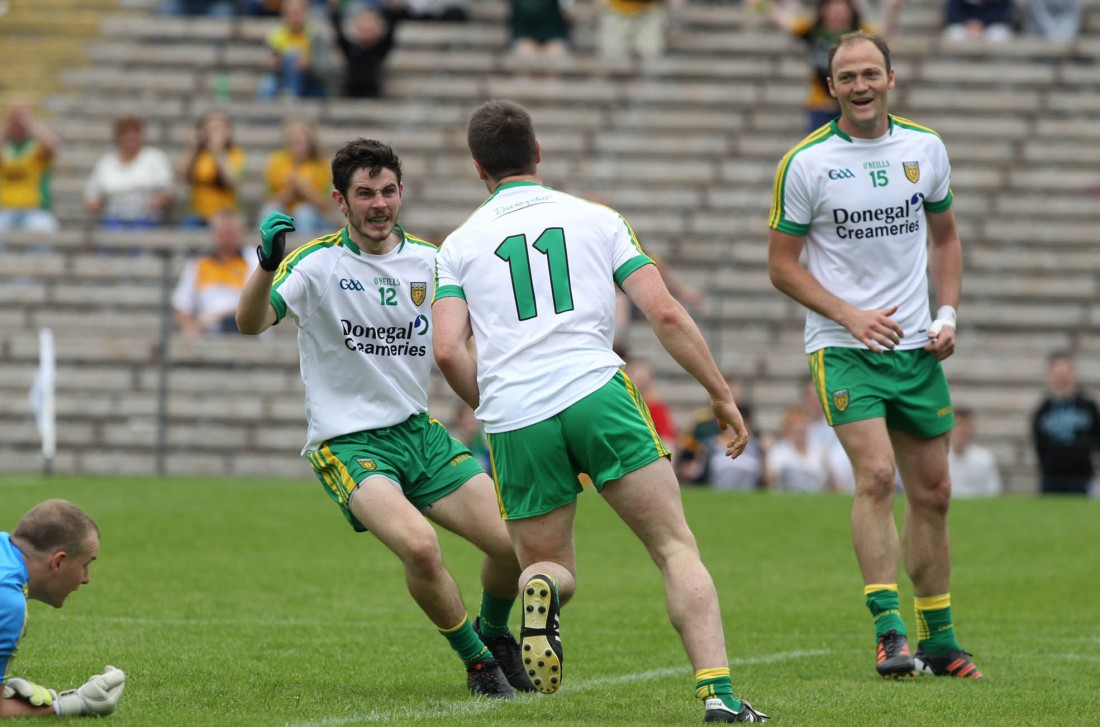 THE provincial crown is within sight again as Donegal sealed their place in a fourth Ulster final in a row at the expense of Antrim.

The now-customary third-quarter burst broke Antrim’s resistance after Liam Bradley’s side had stayed in touch during a first half in which the teams were level four times.

Nerves whistled at half-time among the Donegal supporters in a small 11,795 attendance, with the teams level at seven points apiece, but Donegal blew them from the water in the second half.

Darach O’Connor added another three-pointer six minutes later and the roof was coming in around the Saffrons, with Dermot Molloy cracking home a fine third in added-on time at the end.

It was a day when the new Donegal came to the fore.

With Rory Kavanagh (groin) and Karl Lacey (hamstring) unable to partake and Neil Gallagher having to withdraw after only sixteen minutes, the baton was carried by Odhrán MacNiallais and O’Connor.

MacNiallais kicked four points and contributed immensely to Donegal’s win, operating at midfield for the most part. The Gaoth Dobhair man was credited with a number of  assists too and it was a coming-of-age display on so many levels for the 21-year-old.

If MacNiallais’s was the bright note of the day – and his was a Man of the Match performance that earned a piece of crystal for the mantelpiece  – then O’Connor’s wasn’t far behind.

The diminutive Buncrana attacker only completed his Leaving Certificate exams last week. Here, he kicked 1-2 and the goal was a piece of real class. He’d played a one-two with Frank McGlynn and looked set to pop over a point, only to work back onto his right foot and fire a bullet beyond Patrick Flood, the Antrim goalkeeper.

Antrim weren’t necessarily obliging opponents and, for the first 35 minutes they were well in touch, but by the end there was a clear gulf between the side from Division 4 and that which has just made the jump into Division 1.

Even with the full-forward line of Patrick McBrearty, Michael Murphy and Colm McFadden not on all cylinders, contributing a collective 0-5, Donegal proved both convincing and comfortable winners by the conclusion.

Donegal had seven different scorers and with those marquee names still in reserve they will return to Clones in confidence in four weeks’ time.

Their knack of turning up the head after the interval was the difference here.

Antrim were level for a fifth time when Tomas McCann cancelled out a McLoone point that was scored just twenty seconds into part two, but then Donegal pulled the sword from its sabre and unleashed a painful swing.

MacNiallais restored Donegal’s lead with a fine score from out the left and Christy Toye doubled the lead within a minute, after Martin McElhinney took a quick free around the middle.

Toye turned provider then with a devastating surge through Antrim’s heart. McLoone took receipt and a low finish was decisive, underneath Flood and into the far corner.

Toye was again the man at the controls when he set up MacNiallais and the gap was widened to six.

Antrim’s slender hopes of a repeat of their 2009 shock in Ballybofey against Donegal were firmly up in smoke when O’Connor drilled home an excellent goal. A give-and-go with McGlynn opened the door and O’Connor didn’t need a second invite, the 18-year-old finding the net in style for his first senior goal for the county.

Antrim kept plugging, but their efforts were now a damaged limitations exercise. Brian Neeson (free), Conor Murray and Tomas McCann got on the mark, but Donegal were in ruthless mode.

MacNiallais and McFadden widened the margin further for Donegal and it stood at nine points when McLoone’s effort flashed just over after MacNiallais took a majestic catch from a Paul Durcan kick-out.

The Donegal netminder was able to pop a lot of kick outs short while Donegal won a lot of breaks from Antrim’s re-starts, their industry in this area really telling in stages. Although they tried manfully, Antrim never really looked likely winners, even when they went toe-to-toe with Donegal in the first half.

Liam Bradley was without the Johnston brothers, Ricky and Marty, whose father, Richard, passed away on Friday.

The inclusion of Gallagher was Donegal’s only change from the team that defeated Derry, with Lacey – Man of the Match in Celtic Park – making way because of his injury.

By the time Gallagher departed in the 16th minute, Donegal were 0-5 to 0-3 ahead after a whirlwind start that saw points from Toye, O’Connor, MacNiallais, McFadden and Murphy.

O’Connor showed real poise for Donegal’s sixth point having stepped around James Laverty, but Antrim were on par by half-time as Tomas McCann curled over after Murphy’s successful free that ended a bit of a lean spell for the Tír Chonaill men – who had six wides in that first half.

Since beating Derry, McGuinness and co have moved up the levels in training. At half-time, the manager’s message was simple: The performance hadn’t been reflective of their endeavours.

They paid heed and within 13 minutes of the re-start they could book the rooms at the Slieve Russell again for the third Sunday in July after those goals by McLoone and O’Connor put them on the road to the final.

The summer has yet to see the best of them.