Advertisement
HomeSportGAAPreview: Familiarity, experience and class to see Donegal through to final
Advertisement 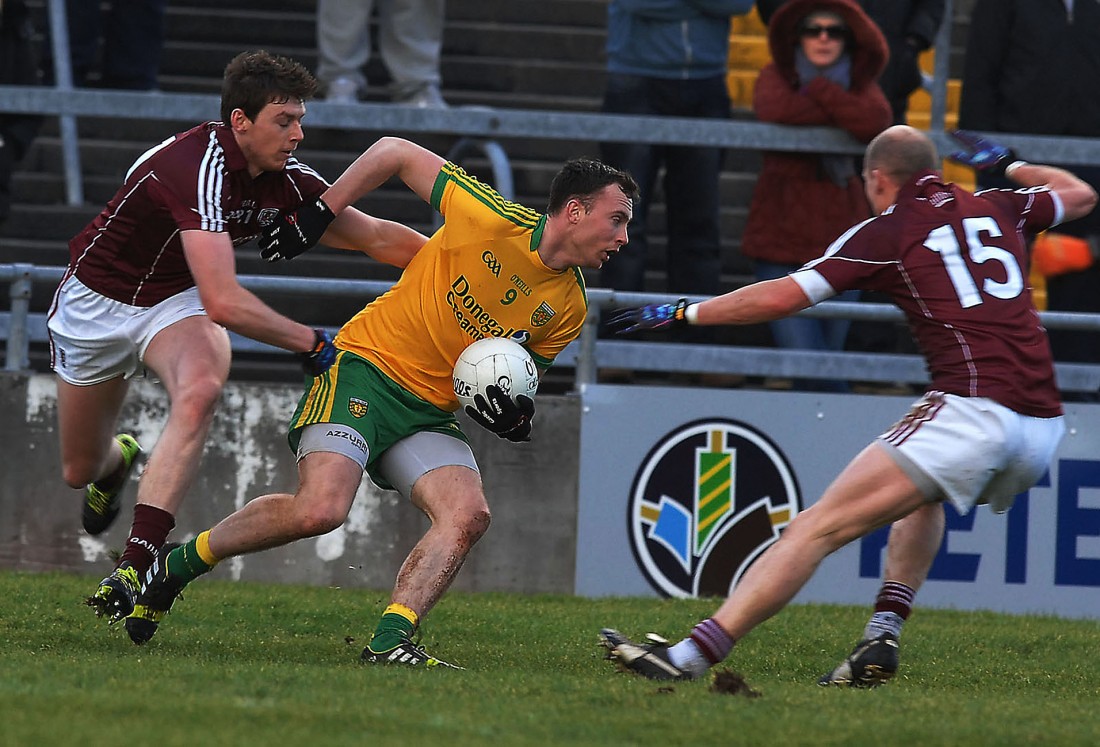 Donegal midfielder Martin McElhinney: The St Michael’s man has played in each of Donegal’s 19 Championship games under Jim McGuinness’s watch.

WHEN Jim McGuinness selected the Donegal team for his first Championship game in charge, he had a rabbit in the hat.

During the second half, McGuinness summonsed a 17-year-old for his first ever taste of the heat of the Ulster Senior Championship. In the curtain raiser, Patrick McBrearty played for the Donegal minors as they overcame Antrim.

With the rest of the minors heading for a warm-down on the MacCumhaill Park pitch, McBrearty was whisked away to take his place in the ranks of the senior panel. The move was kept under the lid, although there were a few whispers surfacing as the week drew to a close.

McBrearty has now played nineteen times in senior championship football. Sunday will be his twentieth.

The Ulster semi-final against Antrim in Clones will be McGuinness’s twentieth Championship game in charge of Donegal.

McBrearty is one of seven players to have played in all of the other nineteen.

That number includes Neil McGee, who is expected to make his 41st consecutive Championship appearance on Sunday. The remarkable record of the Gaoth Dobhair man stretches back to the occasion of his Ulster SFC debut against Down in 2006. The number does include the 2012 semi-final against Tyrone when he had to depart the stage after only two minutes because of an injury.

Paddy McGrath’s return to the fold for the Derry game was seen as a gamble, but it was a calculated one by McGuinness. The Ardara man has started every one of McGuinness’s nineteen Championship encounters as manager. Paul Durcan and Colm McFadden are the reliables at either end of the tree, while Anthony Thompson goes about his business with little in the way of fuss.

The other man to appear in all the Championship games under McGuinness’s watch is Martin McElhinney. He started that game against Antrim in 2011 and while he has struggled to get in ahead of Rory Kavanagh and Neil Gallagher the appearance number show the St Michael’s man’s worth to the Donegal challenge. McElhinney is firmly in the frame for inclusion again in Clones this weekend.

Those players are important to McGuinness and it is their familiarity and experience that counts for so much.

“You would hope that experience will come through for us,” the Donegal boss said.
His selection has yet to be revealed, but all seven should see game time again this Sunday.

“The squad is very important to us. This year, we have had a few lads like Luke Keaney, Odhrán MacNiallais and Ryan McHugh making a push and Darach O’Connor has come in, too. We want to bring these lads on with each game they take part in.”

MacNiallais has played in all of Donegal’s twelve games so far in 2014 – as have McFadden and Michael Murphy.

While McGuinness has those reliable names to depend on and when you consider that list doesn’t contain the likes of Karl Lacey, Frank McGlynn and Eamon McGee there is real consistency with his selections. It could be said that that could breed too much familiarity and not enough freshness, but MacNiallais and O’Connor have proven to be capable of living in the peeling climate of the Ulster war, while McHugh has shown himself to be similarly at home upon that stage.

McGuinness has had the surprise element at times, like the introduction of McBrearty that afternoon, to the mass defensive shield that so nearly paid off against Dublin in the 2011 All-Ireland semi-final, to the hat-tip to O’Connor’s promise in naming him to start against Derry last month.

“Preparation has been going well since the Derry game,” McGuinness said.

“We have a lot of players outside of the county who were doing exams, but they’re home now. We have them all there every night now and that does make a massive difference to our preparation. Training has been going really well. That environment we have at training is very important for the players. You’d hope that their effort and the good work they’ve been doing would result in a performance.”

Antrim won their first Ulster Championship game since 2009 with their quarter-final success over Fermanagh at Brewster Park and McGuinness has warned that the Division 4 county are capable of causing an upset.

He said: “We’re very well aware of the threat Antrim will bring. I got my eyes opened a bit watching them against Fermanagh.

“They kicked 1-10 in the first half – that’s very impressive shooting no matter where you’re playing, but especially in Championship football. The game looked to be over, but they switched off for a wee period. We know what they’re coming with and they have some very good, very experienced footballers.”

Antrim will be without Michael Armstrong owing to a hamstring injury, but Kevin Niblock and Tony Scullion have dusted off knocks and will be available.

Donegal’s defence will not be as porous as Fermanagh’s and you’d consider the Donegal attack to be able to make the same inroads and more as Fermanagh managed when they shook their heads clear in the second half. Michael Murphy’s talents came to the fore against Derry, with moments of magic as good as you’ll find coming off the Glenswilly man during that second half.

Lacey, Thompson and McGlynn showed some of the same dynamic edges that were their calling cards in 2012. Defensively, Donegal were mean in Celtic Park and Antrim will have to play out of their skins if they’re to cause an upset.

Donegal will spend Saturday night in the Slieve Russell Hotel, their now-usual residence for games in Clones.
McGuinness said: “Having the same routine is important for us. Every game in itself is unique, but you hope that by having the same preparation will help us to achieve what we want – and that’s getting to an Ulster final.”

Verdict: Donegal to win with a bit to spare