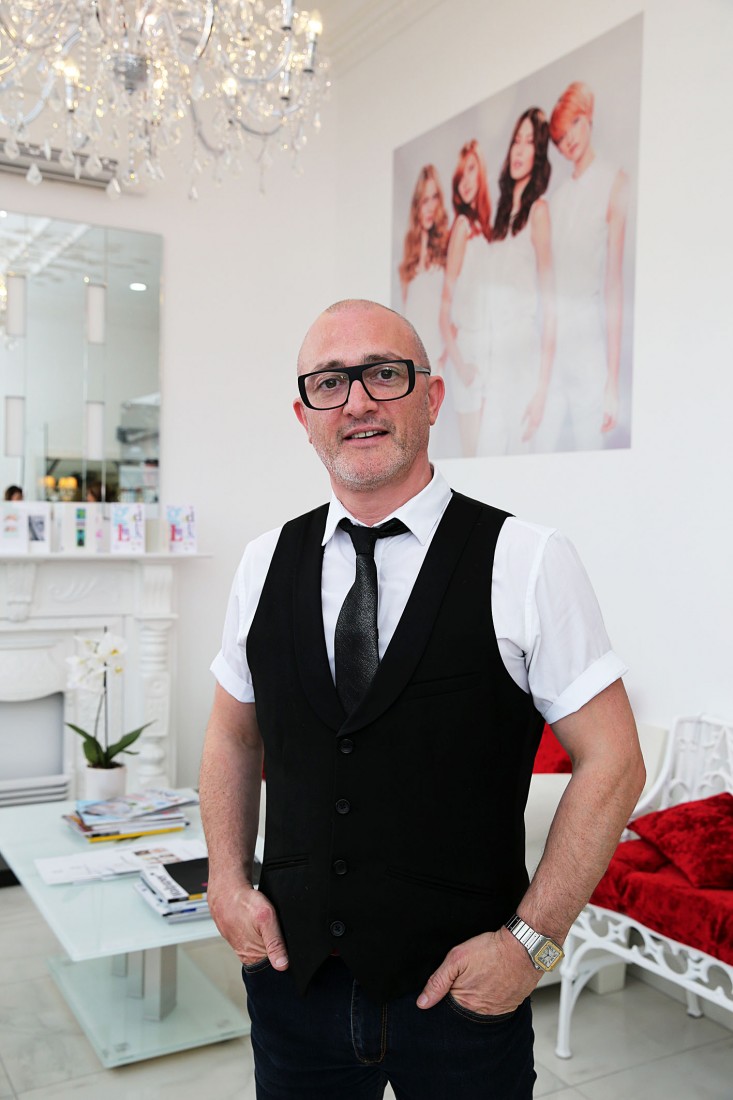 The opening of the salon is both a huge vote of confidence and a significant jobs boost for town centre while its central location provides easy access with ample parking.

Hairdressing has come a long way since Patrick Gildea Hairdressing was established as a one man operation in the Cathedral Town back in 1988. Today, the Group employs 25 full-time and five part-time dedicated and highly trained professionals over its two businesses in Letterkenny.

“I spent two years training in a small salon at the bottom of the town before spending some time in London, Belfast and Strabane. When I came home again I opened my first salon in a premises known as ‘Frank’s Shop’ opposite the Ulster Bank. The Dillon brothers owned it and I got the first month’s rent free. I thought I was a millionaire,” he recalled this week.

Aged 18 years, he had borrowed £7,000 and thanks to guidance from the late Fr Jimmy Shields, the then PP in Drumkeen, Patrick sought advice from St Vincent de Paul who were involved in helping start up businesses at that time.

“I started with my then girl-friend Anita (now Patrick’s wife) but she could only stick me for a while before she moved on,” he laughed.

It was a time when Ireland was caught in the middle of a deep recession and most of his friends were emigrating, many to the United States.

Within two years he had moved up the Main Street to Houston House – the location of a well known shop – which was being developed by the late Donal MacLochlainn. It’s been home to his business for the past twenty-six years.

“There’s been massive changes in the main street, and Letterkenny, since then. It’s changed from being a small town where buses from Glasgow stopped at the square to let people off, to a vibrant big town – small city almost.

“Today we have a multi-cultural town which is made up of people from all over the world and indeed from every county in the country and with that business has changed too and we’ve had to change with it” he said.

“We’ve seen it with the big American factories – they’ve been a massive influence – coming to town and it’s like it changed overnight. I’ve watched a small town mushroom yet there still remains a small town within a much bigger town – you can see that in places like Blake’s Bar and Gallagher’s (Drum Bar) where time appears to have stood still but in a nice way,” he added.

The main street which provided the heartbeat of that growth, has also changed and while it has faded a bit in recent years, Patrick believes that it still has a pivotal role to play in the future growth of Letterkenny.

“I’m not moving because I no longer like the main street – quite the opposite. I’m moving purely because I’ve found a much larger premises which will help my business grow.
“I want to move more into education; to create a better experience for my customers. Over the past twenty five years I would like to think I’ve learned from my mistakes and Riverside Retail Park has been developed with that in mind.
“First and foremost it’s staff friendly because if you’ve happy staff I think your customers will also be happy and the idea is to create an experience because it’s no longer just a case of getting your hair done,” he explained.
Nowadays women go to the hairdressers for some down time – time away from the children, household chores and their busy lifestyles.

“They also come because we’re good at what we do. That’s not being arrogant but we pride ourselves on staying ahead of the posse while we’re also bang up to date with the latest trends,” he said.

At its peak, Patrick Gildea Hairdressing had four salons along the Main Street alone.

“As the economy grew we did too but we’ve had to change and adapt like other businesses have in more recent times.
“The idea behind this new salon is to create a “centre of excellence” – to cater for everyone’s needs under the one roof at reasonably affordable prices. We can’t be the cheapest because of the level of work we do but I do think that we provide value for money and that’s been one of the keys to our success over the years,” he said.

Hair stylists join Patrick Gildea’s team straight out of school while others, already trained, are also employed. The one common denominator is that they all have to start from scratch.

“I’m not saying that others are wrong but we’ve a certain way of doing things here and everyone has to conform to that and, as a result, we train them from the start. Education is massive to us and we offer the best that’s available in the north west,” he said.
At present, Patrick and members of his team conduct private classes for other hairdressers in small groups but he hopes to open his own training school in the not too distant future.
While it is his name above the door, Patrick is quick to point out that he has a very talented team of stylists who can do as good, if not a better, job than he can.
“I’ve my own client list but some of my stylists have a bigger clientele list than me. That comes with hard work and a level of professionalism that is second to none,” he said.
Looking into the future Patrick would like to open new salons but as franchises.
“We’ve a five year plan as to where we’re going and I’m excited about the future,” he said.
With 23 hair salons in Letterkenny there’s plenty of customer choice, exactly the way Patrick Gildea thinks it should be.

“We all get our fair share of the cake and anything that creates employment in Letterkenny has to be welcomed. We don’t spend too much time analysing what everyone else is doing, instead we’re working out how to be as good as we possibly can,” he said.

With 97 per cent of his custom coming through telephone booking he’s doing something right.
“This new salon is the biggest in the north west and hopefully we’ll continue to grow the business. Because we’ve been there (main street) so long, 97 per cent of our business is booked over the telephone. That doesn’t mean we don’t want to grow our passing trade. The bonus for them now is the additional parking” he smiled.

“Hairdressing is now recognised as a profession rather than being something you did when you dropped out of school. People take it very seriously – there’s lot of exams and on-the-job training. Customers expect higher standards and the bar has been raised a long way and I think that is being recognised,” he said.
Married to Anita, the couple have three children Bláithín, Áoise and Óisin.
“They keep me grounded as do my staff,” he said.