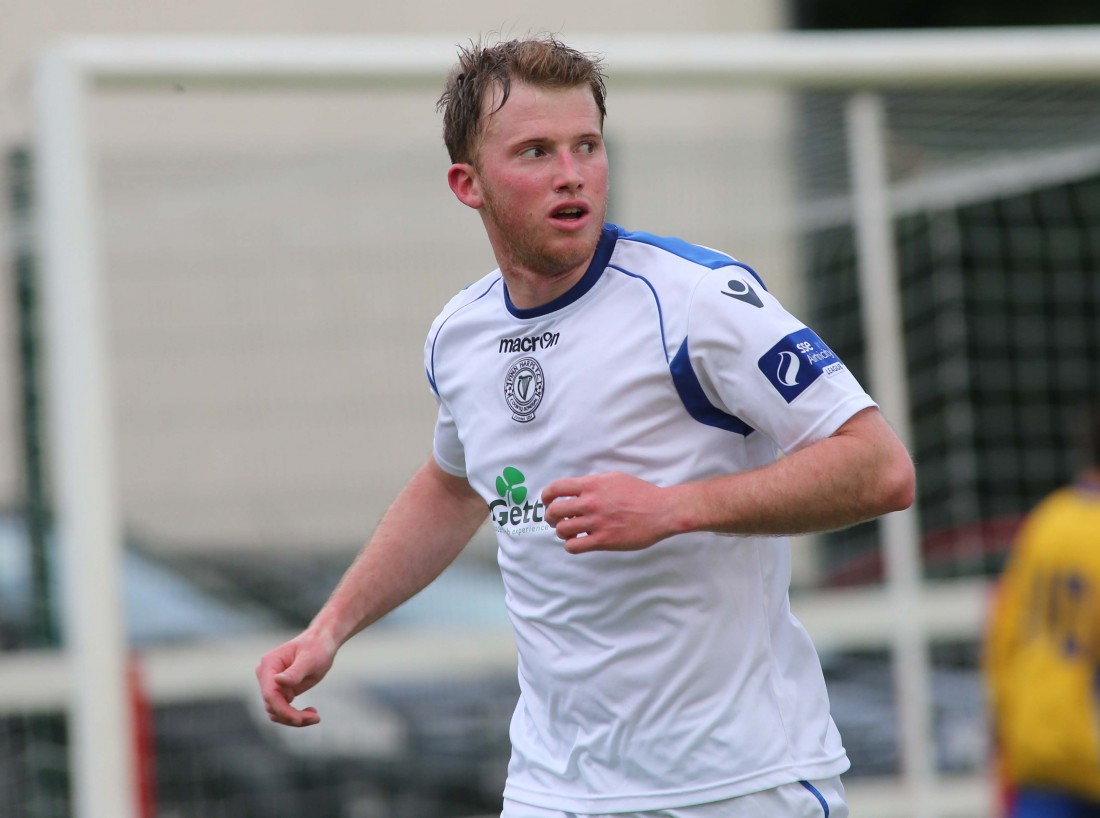 Pat McCann, who scored the only goal of the match between Belgrove/Home Farm and Finn Harps in the Ford FAI Cup. Pic.: Gary Foy

HAVING scored his fifth goal of the season to give Finn Harps a narrow FAI Cup win against Belgrove/Home Farm, midfielder Pat McCann is targeting three points against Longford Town on Friday night to send his side to the mid-season break on a winning note.

Harps are now unbeaten in five, wins over Cobh Ramblers and Belgrove-Home Farm bookending a sequence that also includes three draws against Galway, Shelbourne and Wexford.

Harps are six points of the promotion play-off spots – occupied by Galway and Longford – but McCann believes that his team is capable of mounting a challenge.

“If we can get a good result against Longford at home it would put us in a good frame of mind to attack the second half of the season,” said the New Yorker.

“If you look at how the League is, how we’re playing and how other teams are playing, it’s any man’s game. We’ll keep the head down and keep doing what we’re doing. Hopefully that pays off.

“It’s been great so far. There have been ups and downs, but you judge it on how the boys respond and the way they handle it. In the last three games, prior to this, we have gone down to ten men and it’s been unbelievable the way we’ve dug it out.”

A spate of red cards – six in nine games before Friday’s win at Frank Cooke Park – had disrupted continuity in the Harps line-up. The upbeat McCann says that it hasn’t been all bad that Ollie Horgan has had to chop and change.

He said: “If you want to look at the glass half full, it keeps boys on the toes. It gets them chances and boys know that if their number gets called they have to be ready to punch the clock and go to work.”

Last season, McCann played a traditional central midfield role, but under Horgan he has been given a little more attacking licence. His five goals to date have boosted Harps in a season that has seen strikers Kevin McHugh, Ruairi Keating and Sean McCarron all have their respective spells out of action.

He said: “I’m enjoying it. It’s fun to be able to get into areas where you can get opportunities to score like that. Sometimes you put them away, sometimes you don’t but the most important thing is we’re creating chances.

“It was a great ball in from Kevin. Anytime Kevin gets on the ball, he’s dangerous.

“The early goal got us off on a good footing. We had a good tempo. We didn’t capitalise on it but thankfully it was enough for us in the end.”

McCann’s goal sees Harps book their place in the third round. Even if they had to endure some late moments of anxiety, they held on.

McCann said: “The priority was to finish out the win. Getting out of here with the win, whatever way that was, was the number one priority.

“They sat in and became difficult to break down. Credit to the boys, they were patient. We picked the moment earlier and unfortunately another moment didn’t come for us.”