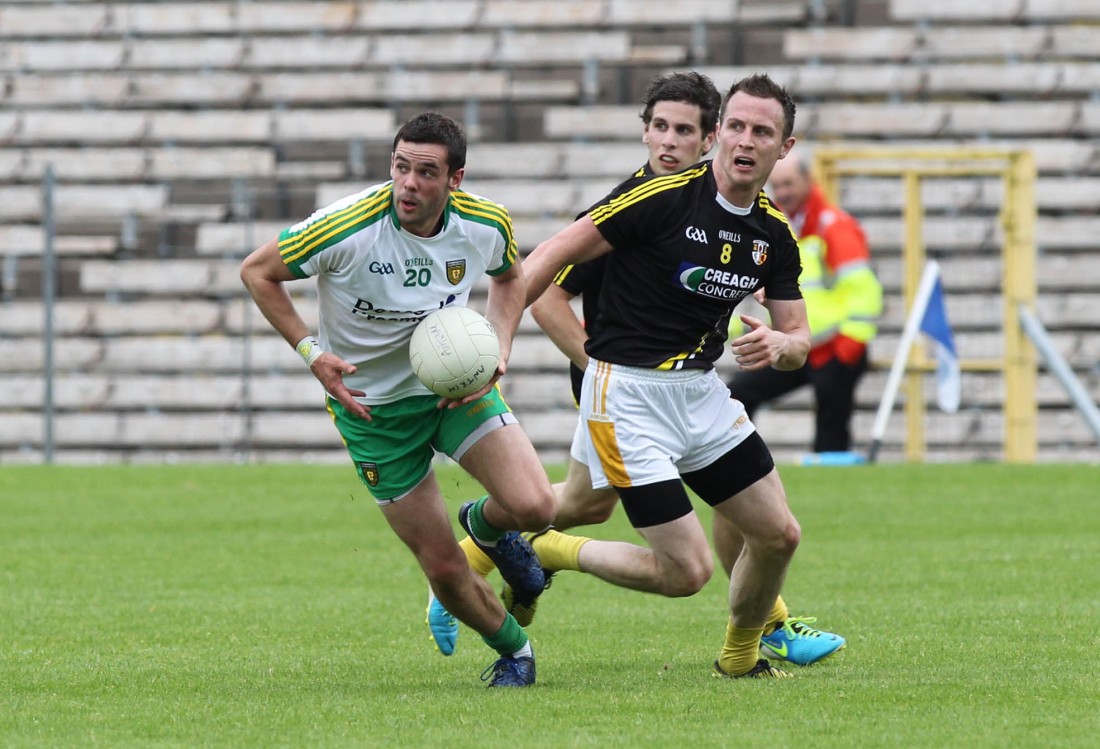 BY CHRIS MCNULTY IN CLONES

ODHRÁN MacNiallais watched and waited last year from the sidelines, but this year the Gaoth Dobhair man has practically forced his inclusion.

In 2013 the sum total of his efforts was a cameo in the National League against Dublin, but when handed his chance in January by Jim McGuinness the 21-year-old hasn’t looked back.

He has played in every game this year, but it was only via a late change that he got the nod to start against Antrim – and he repaid McGuinness’s decision in style.

MacNiallais hit four points and was involved in a lot of Donegal’s big plays, operating largely at centrefield.

“I was really delighted to get the chance because competition for places is pretty keen,” he said.

“Thankfully it worked well for me.

“Midfield is not a position that I have played all that much but I am enjoying it since Jim gave me the chance.

“I had a few outings in the league in the position and they went well enough for me and I played the first half in midfield the last day against Derry and I felt it went well for me too.

“It is a very demanding position and you have to work hard in and train hard for it and thankfully we have the work done in training.”

MacNiallais was perhaps a tad fortunate not to have had his name punched into the first fifteen announced by McGuinness on Friday, but there were no complaints from the player.

Instead, he gave his answer in the form of a Man of the Match performance against Antrim.

He said: “Naturally, I was disappointed but it was a case of putting the head down and waiting for the chance.

“But it is up to Jim and it is up to him to put out the strongest team and if he feels the place for me is on the bench I am happy to do that as long as I am part of the team and get a run at some stage.”

MacNiallais’s display was critical to Donegal. He was overage for the under-21s this year, and his youthful complexion looks much more tender even than the 21.

He had to bide his time to get in the fifteen, but is firmly in the frame now for the July 20th final.

He said: “I suppose we have had the same team for the last few years and it has been massively successful and it has been hard to break into the team. And you cannot fault Jim for that but I am delighted now that I am getting my chance and I’m enjoying myself.”

When Donegal went in level at the break, 0-7 to 0-7, a pep talk from the manager worked wonders – and a devastating second half saw them claim a thirteen-point win.

MacNiallais said: “The heads were down at half-time but Jim came in and lifted us again. He is a great man at motivating people and yiou can see that with the way we played in the second half.

“He told us what we were capable of doing and that it was a matter of going out in the second half and stepping up- the pace and we did that and the scores came.

“It was great to get over the line.  We knew it wasn’t going to be easy. It was a tough first half and it was level at half-time. We felt it was always going to be hard work that we needed.”