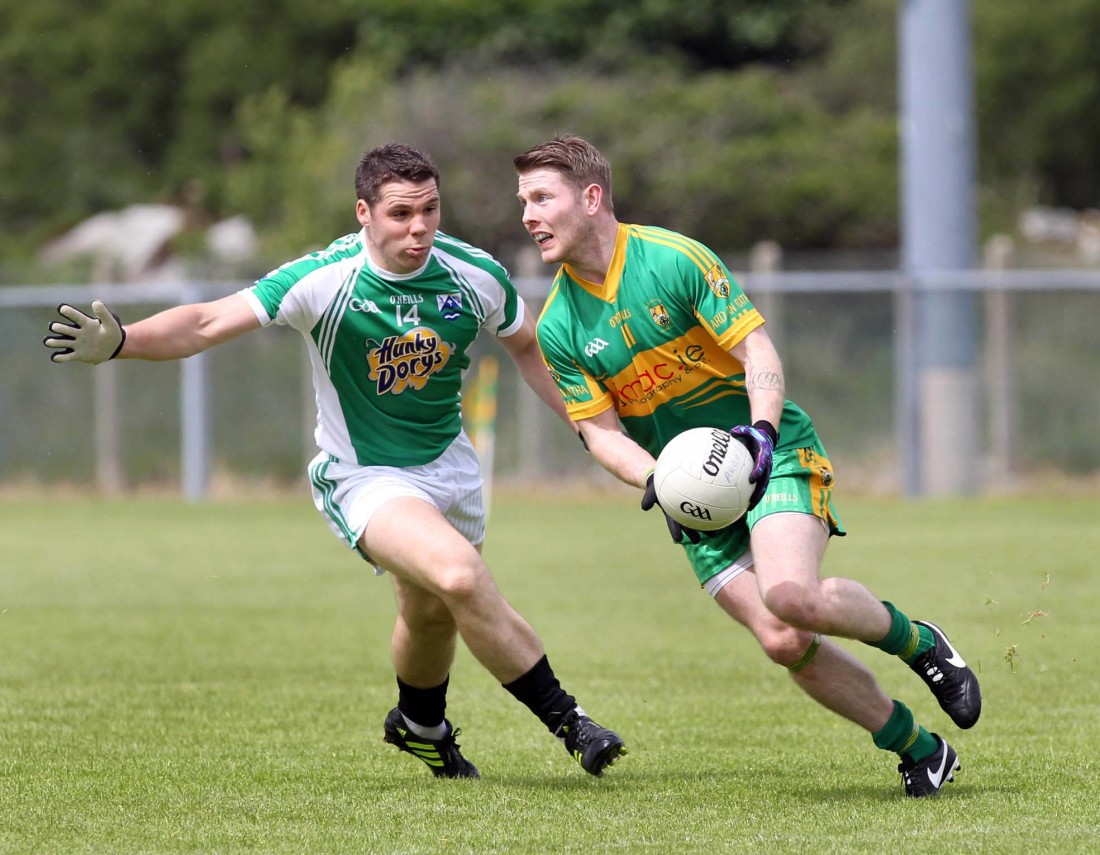 GAOTH Dobhair pulled away in impressive fashion during the second half to defeat Ardara by four points in a sometimes tempestuous encounter at Pearse Memorial Park.

Odhrán MacNiallais’s 45th minute goal was just the spur for the Magheragallon men, who came from a five-point deficit at half-time to win by four.

That nine-point swing was largely down to MacNiallais’s goal, but they could also point to a stirring performance from sixteen-year-old Donegal minor player Michael Carroll, who showed real touches of class.

Gareth Concarr’s three-pointer late in the first-half had given Ardara a real command of things, but the sending off of midfielder Kenneth Doherty – one of three players to see red over the hour – was a hammer blow for Adrian Brennan’s side.

Doherty had been having a big influence on things, kicking two points and winning the ball to set Concarr on his way for the goal. Already on a booking, Doherty was given his second yellow card by referee Michael Mulhern in added time at the end of the first half after a foul on MacNiallais.

The numbers were evened up just three minutes into the second half when Gavin McBride was given his marching orders after getting himself needlessly involved in a tangle on the end line and lashing out.

The red mist fell again nine minutes into the second half, Ardara’s Kevin Byrne shown the line. Byrne, having also been cautioned in the first half, got involved in a grapple that got out of hand pretty swiftly and paid the price.

Taken on their own merits, there could be few, if any quibbles about the dismissals, but when a mass brawl that involved players and mentors from both sides went unpunished there was growing unease that proceedings were running away from the man in the middle.

With thirteen men, the gaps were appearing in their rearguard were appearing all too often and when MacNiallais slid under Declan Gallagher after a fine move involving Eamon McGee and Carroll the momentum was firmly in Gaoth Dobhair’s sails.

Kevin Cassidy’s side outscored Ardara 1-7 to 0-1 in the second half with CJ Molloy’s 44th minute free all the home side had to show for their efforts.

It had been all so different in the first half.

Even without Conor Classon, Jimmy O’Connell and Brendan McNelis, Ardara began brightly with McGrath scurrying through in the opening minute only to be denied by a fine block.

Jamie Boyle shot Gaoth Dobhair ahead, but Molloy levelled it up with a superb curling point from the left-hand side a minute later. Molloy, the focal point for most of the Ardara attack, turned provider for Brendan Boyle to put them in front.

MacNiallais levelled from a free, awarded after the Donegal player was fouled by Doherty, for the infringement that earned him the first of his cautions.

That came after Christopher Sweeney, the Gaoth Dobhair goalkeeper, got down bravely to make a save at Martin Shovlin’s feet. At the other end, Gallagher saved well from Carroll, who burst onto a McBride centre late in the half.

With Doherty powering over two points Ardara led at the break, but his sending off left them without a player whose fingerprints had been all over the opening half-an-hour. It was from his fetch that Concarr gained possession for his goal, speeding clear before firing a neat left-footed effort past Sweeney.

Carroll, Noel Kelly and Carroll again brought Gaoth Dobhair – lining out minus Leaving Certificate students Cian Mulligan, Kieran Gillespie and Niall Friel – back from the brink and when MacNiallais netted the pendulum swung. A fisted effort by Peter McGee had them ahead for the first time since the eighth minute and the finished strongly.

Carroll, growing in stature all the while, slotted over a free before landing a magnificent point from play.

With Ardara now in search of goals, it was Kelly who hit the clincher, arching over from the right flank to make safe the win.

By the end, it was cards and not scores that were all the talk – and it was a shame following an entertaining clash between two sides working usefully towards mid-August.