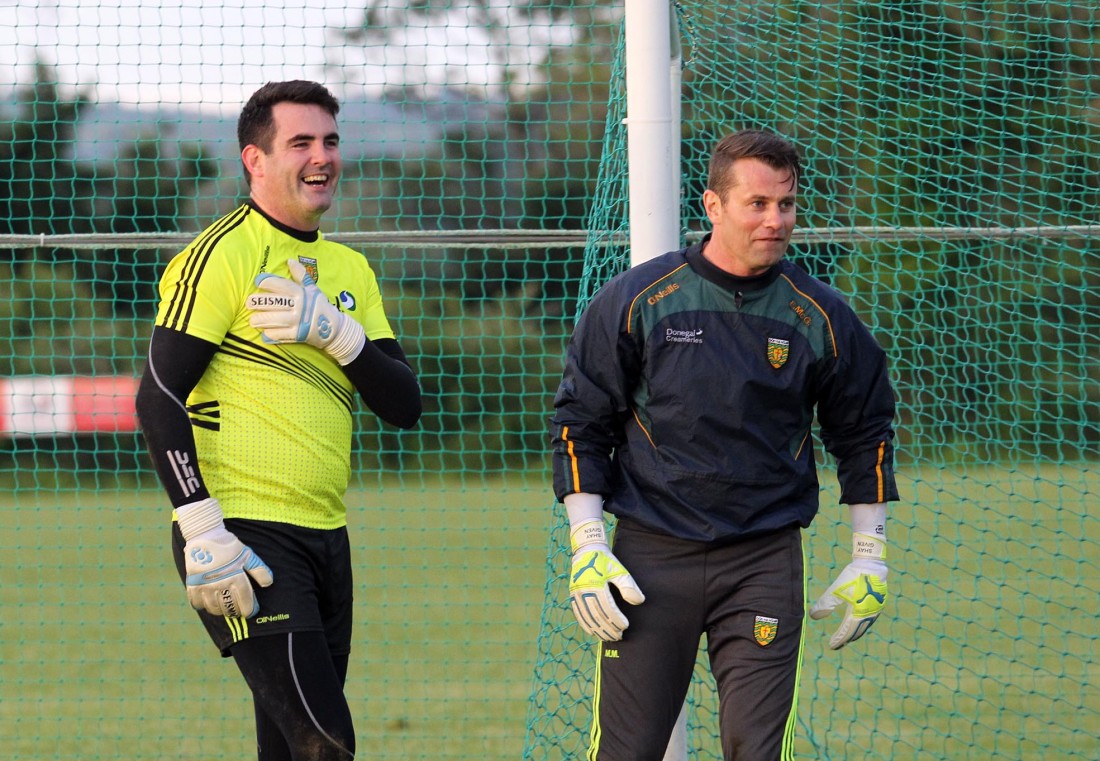 Shay Given trained with the Donegal footballers on Friday night. He is pictured with Paul Durcan. Photo: Donna El Assaad

SHAY Given will report to pre-season training at Aston Villa next month still unsure as to what his next move will be.

The 38-year-old Lifford man was added to Villa’s coaching staff towards the end of the last Premier League season, but Given will aim to prolong his playing career. Having fallen behind Brad Guzan and Jed Steer on the goalkeeping ladder at Villa Park, Given is expected to move away from the Midlands club. However with owner Randy Lerner recently confirming that the club is up for sale a period of real uncertainty prevails.

“It’s a bit of a transitional period as no-one knows what the future holds really,” Given said.

“I don’t know what’s going to happen. I’m still a player at Aston Villa. I did a bit of coaching towards the end of the season. It was great for everyone that we stayed in the Premier League. It was a tough season.

“I’ll go back in July with the lads as a player until I’m told different. Ill see what the manager’s thoughts are for going forward too.”

Lambert has been the centre of much speculation, but Villa are under the clouds of apprehension.

Given hasn’t played for Villa in almost a year and a half. His last appearance was in an FA Cup game against Millwall in January 2013. It is now almost two years since he played a Premier League game – a 3-1 loss to Everton in August 2012. Frustration has been familiar in the time since.

Comfort arrived in the form of a loan move to Championship club Middlesbrough in November.  An initial one-month loan move was extended and he stayed at the Riverside until the end of February, with Villa putting a block on an extension.

In sixteen games with Boro, Given kept ten clean sheets. Middlesbrough, before his arrival, had leaked 26 goals in sixteen games. Joining an elusive club, he became only the sixth player – after Joseph Blackett, William Agnew, Tommy Urwin, Stan Anderson and Alan Foggon – to represent Newcastle United, Sunderland and Middlesbrough.

The move also allowed Given to put to bed any doubts that he may be finished at the top level.

Now, he admits that he wants to extend his playing career.

He said: “I think I have a few years left to offer playing. You look at Mark Schwarzer, who played in a Champions League semi-final at 42. You just want to play as long as you can. Everyone who’s retired says to play on as long as you can because you have plenty of time to coach after that. I’ll just go back for pre-season and see what Paul Lambert’s thoughts are.”

In April, Lambert promoted Given and Gordon Cowans to become his assistants following the departure of Ian Culverhouse and Gary Karsa, who were suspended by the club.

Villa managed to get the necessary results to avoid the dreaded drop to the Championship.

Given enjoyed his time as a coach.

He said: “I’ve done my coaching badges before. I have my UEFA B and UEFA A licence. It was a good chance to learn from the manager and from the coaches at the club. It was a good experience for me too. We had some big pressure games. We had to get results to stay in the Premier League so it was good to see that side of things as a coach.”

Given was a £3.5million signing from Manchester City in July 2011. Signed by Alex McLeish, he was given a five-year deal at the Midlands club that doesn’t run out until the summer of 2016.

Such was the impression he made at Middlesbrough, Given was linked with a possible return to international football. Capped 125 times, he bowed out following the Euro 2012 finals in Poland. A return seemed on the cards and indeed new manager Martin O’Neill hasn’t ruled out a move for the Donegal man. However, much will depend on the player’s club future.

Given has been watching the progress of Seamus Coleman, who was on the fringes of the Ireland squad in his time and who really made the right-back slot his own in the campaign gone by.

Coleman was Everton’s Player of the Year in 2013-14, a season that saw him score seven goals for the Toffees.

“It’s always great for the county to have someone playing in the Premier League. It gives them a great interest. Seamus has definitely taken the baton up and is playing well for Ireland too. It’s fantastic that he’s a regular in the Irish team.”

Coleman has been linked with Manchester United and Arsenal in the last year and Given hasn’t been surprised at the speculation. He said: “He looks like he could play in any team, he’s playing that well at the minute.

“That said, Everton is a big club as well, with a great history. If he wants to stay there to play for a few more years he’ll be in a good club.”

Given believes that Ireland can make hay under O’Neill and Roy Keane, his assistant, in the 2016 European Championship qualifiers.

He said: “With those two in charge they have a great chance.

“They can’t buy the players so have to find the players with Irish connections. It’s not an easy group either. We were second seeds and everyone was looking forward to a nice group, but we go and get Poland, the third seeds, and Scotland, who are really on the up. We couldn’t have asked for a tougher group. It won’t be easy to qualify. I’m quietly confident that we can do it.”

Keane’s future has dominated the back pages in the last two weeks. He has emerged as the leading candidate to take over from Neil Lennon as Celtic manager and Given says the controversial Corkman would be ‘the perfect fit’ at the Hoops.

“He’s an ex-player and with there being the big Irish connection,” he said.

“He played an Man United for so many years under Sir Alex Ferguson so I’m sure he’s picked up lots of good advice along the road. The biggest thing that Roy commands is respect off the players with the career he’s had.

“The only down side of the Celtic thing is that Hibs and Hearts are out of the Premier League, as well as Rangers. It’s a shame for Scottish football. When I was at Celtic as a kid, Rangers, Hearts, Hibs and Celtic were the four biggest clubs up there. It’s a shame that three of them are out of the League.” 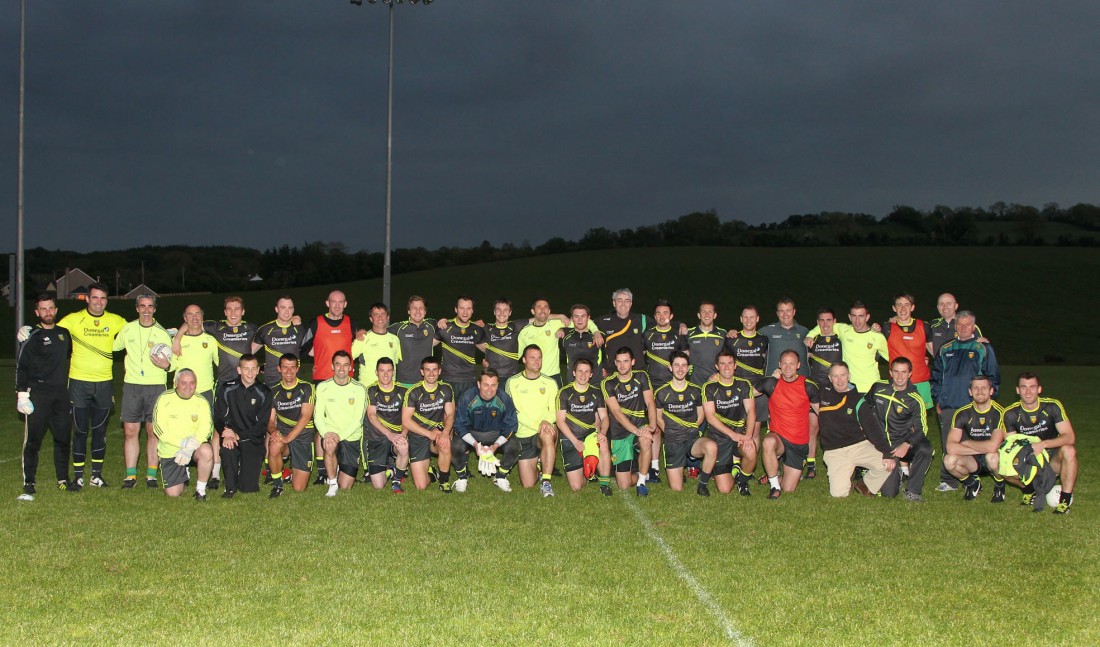 Shay Given pictured with the Donegal GAA Senior Squad after he joined them for training on Friday night. Photo: Donna El Assaad