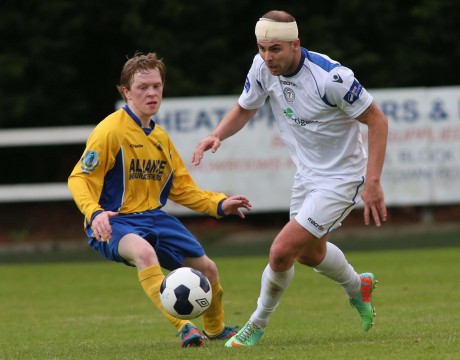 BY CHRIS MCNULTY IN DUBLIN

OLLIE Horgan was disappointed to have been left biting at his fingernails towards the end of Finn Harps’ FAI Cup clash with Belgrove/Home Farm on Friday night.

Pat McCann’s early goal gave Harps the lead and when Conor O’Keefe, the Leinster Senior League team’s right-back, was sent off after only 18 minutes the stage seemed set for Horgan’s team to beat them out the gap.

The opposite happened and there were dangerous moments late in the day when Belgrove/Home Farm peppered Conor Winn’s penalty box in search of an equaliser.

Harps have survived – but only just.

“We’re still in it and that’s about the height of it,” said their manager with a deep sigh.

“It certainly was a battle, as we expected it to be. I’m a little bit disappointed in that we had one or two chances to finish it off at one-nil up.

“I’d have been happy to get a draw here. We started very brightly and we deserved the goal. The sending off galvanised them a little – as it has done with us in recent weeks. They sat back and we found it difficult.

“To Belgrove’s credit I was disappointed to be hanging on by a thread in the last seven or eight minutes of the game. But, look, we got away with it. We weren’t at our best by any means, but Belgrove weren’t at their best either. They had men missing there tonight.”

Harps themselves have had disciplinary issues of late with a man having been sent off in each of their last three games, but at Frank Cooke Park it was their opponents who found themselves a man in arrears.

For Horgan, it was like he was looking in the mirror at his own side of late.

He said: “It’s like the reverse of what has been happening to us in recent weeks. They went down to ten men, sat back and we found it very difficult to break them down. That was the same as us down in Galway and against Shelbourne.”

Harps could have put the game beyond the reach of Belgrove/Home Farm, but Ruairi Keating curled narrowly wide early in the second half.

Horgan said: “If he had taken that the game would’ve been over and done with. The longer it went on with only the one goal in it, of course they were going to come at us. I certainly didn’t enjoy the last ten minutes. We were playing ten men and they were bombarding us with balls which was disappointing.”

Of greater concern to Horgan, though, was the yellow card picked up by the striker in the second half, a caution that inches him closer to another suspension.

The Harps manager said: “He got booked again for something that could easily have been avoided and that has been the story of our season so far.”

Damien McNulty has reached four bookings, having been yellow carded in the 41st minute, and will be out of the Waterford game, the first after the mid-season break.

Horgan said: “A few in with a few our seems to be the way it is with us.

“There doesn’t seem to be a game where I can get a full squad to pick from. That’s been the case but we’ll just batter on.”

Thomas Bonner and Sean McCarron will definitely miss this Friday’s game against Longford Town in Ballybofey, through suspension and injury. Having got through by the skins of their teeth, Harps will have to up their ante for the midlanders’ visit to Finn Park.

Horgan said: “C’mere, we got away with it, but we have work to do in the next week before we play Longford. They beat Athlone away from home and that is a massive game for us.

“You look at Longford next week and you think: ‘what will they do to us if Belgrove did that to us?’ The ‘but’ part of it is that we’re still there.

“We will prepare for them well and we expect a battle again. If we can defend as well as we did tonight against the long ball we might have a chance but if we play like we did in the first half against Shelbourne or Wexford we’ll be in trouble.