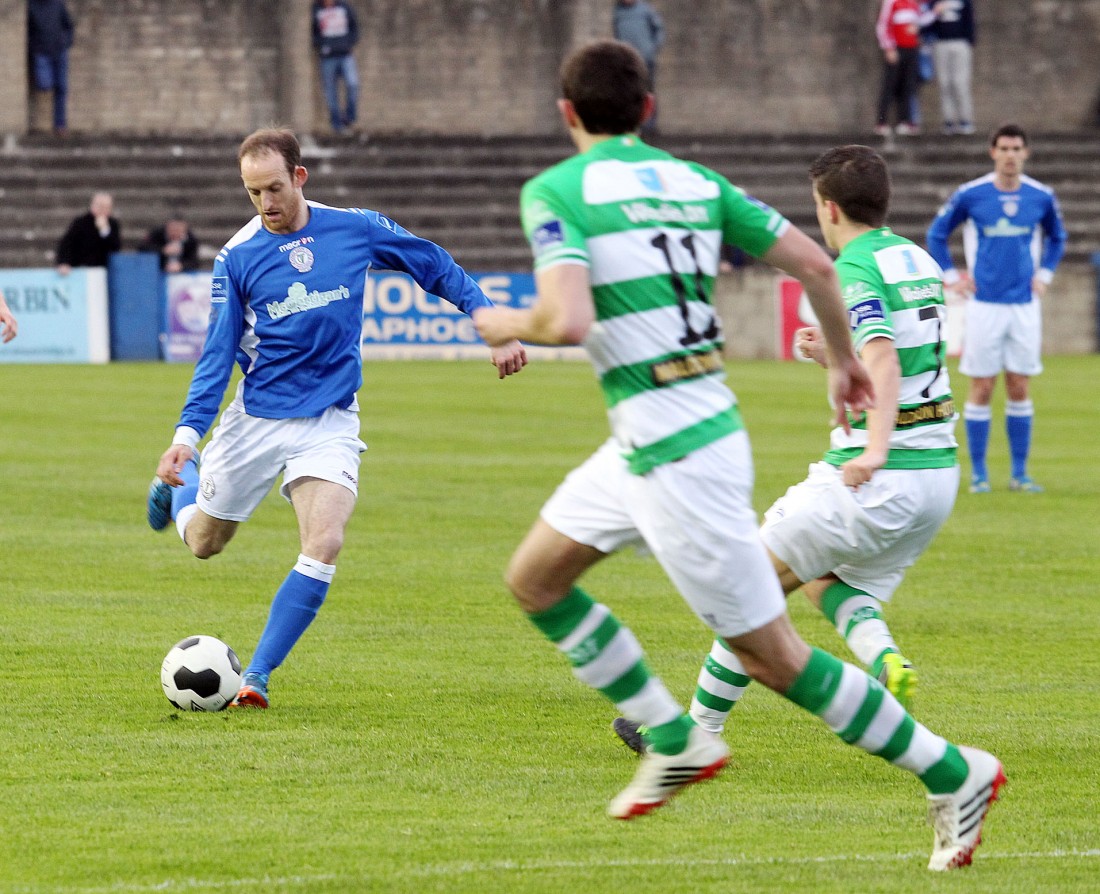 Michael Funston is suspended for Finn Harps this week

Although Horgan welcomes Caoimhin Bonner back from a two-game suspension, Harps are without the suspended duo of Michael Funston and Josh Mailey for the trip. Thomas Bonnar, sent off against Wexford Youths last weekend, will serve a suspension in next week’s League game against Longford Town.

Goalkeeper Shaun Patton is sitting Leaving Certificate geography and maths exams at St Eunan’s College, while there are serious concerns surrounding the availability of Damien McNulty, Paul McVeigh and Jonny Bonner, with Sean McCarron definitely ruled out because of a fractured ankle.

“It’s not good at all,” was the grim assessment of Horgan midweek as he surveyed a depleted bunch.

Neither of McVeigh (knee) or Bonner (back) trained this week and are classed as major doubts by Horgan, who will give the rugged McNulty every chance of making the trip. The tenacious Derry native had to go to Wexford General Hospital to have stitches inserted in a head wound sustained during last week’s League game against Wexford Youths at Ferrycarrig Park, with the player also having a tooth knocked out.

Horgan said: “We don’t know with Damien. We will leave that up to the doctors. He’s to go back for a check later in the week, but he’s very much in doubt at the minute.”

Mailey sits out another game owing to the red card against Shelbourne two weeks ago with Funston sidelined having accumulated four bookings.

“Some of the lads have been sitting around on the fringes waiting on game time. It’s disappointing to have so many out. I was going to change a couple of players anyway, but this has really forced my hand now. But, we’ll get on with it.

“These lads have been training all year and have been waiting on the chance. Some of them have got very little game time. We’ll be able to see them now in a Cup tie. Having so many players out adds to what was an already difficult tie.”

Conor Winn will return in goal to take the place of Patton with senior coach James Gallagher possibly donning the gloves as the sub goalkeeper. Caoimhin Bonner returns from suspension and is the front-runner to replace McNulty if the defender doesn’t make it. Mark Forker and Carel Tiofack are also vying hard for inclusion, as is Gareth Harkin, while Milford youngster Darragh Black is another who could be blooded.

Belgrove/Home Farm finished fourth in Senior 1A in the Leinster Senior League – the second tier of that League – but defeated Drumcondra, the Senior 1A winners, in the first round of the Cup. An Eoin Mooney goal just before half-time gave them the win.

“We will have to watch them. Four of their squad played for Wexford Youths last season and they have big Paddy Collins who played for Longford Town last season. They’ve a few lads who played in the World Student Games in Kazan who had success with the Carlow IT. We knew this was going to be difficult but now, given our predicament, it’s going to be very difficult.”

While Harps are unbeaten in their last four, that sequence includes a draw in each of their last three encounters – against Galway FC, Shelbourne and Wexford. A deeper scrutiny shows that the Ballybofey residents have won just one game – the 2-0 win in Cobh last month – in their last eleven.

In Wexford, Harps came from two down to secure a precious point as Kevin McHugh and Packie Mailey netted second-half goals.

“It was very similar to the week before (against Shelbourne in a 1-1 draw),” Horgan said.

“We only came to life when we were really on the back foot. At 2-1 down we had a man sent off, but Wexford could, and should have been out of sight by then. In the last fifteen or twenty minutes we threw caution to the wind. Wexford did tire – which was natural after playing a League Cup game against Galway earlier that week – and we got a rub of luck. It’s hard to see how we had played so poorly and yet we finished the game with so much heart and desire.”

Frank Cooke Park is located on Griffith Avenue, Dublin. A replay, if necessary, has been penciled in for Finn Park on Monday next at 7.45pm.