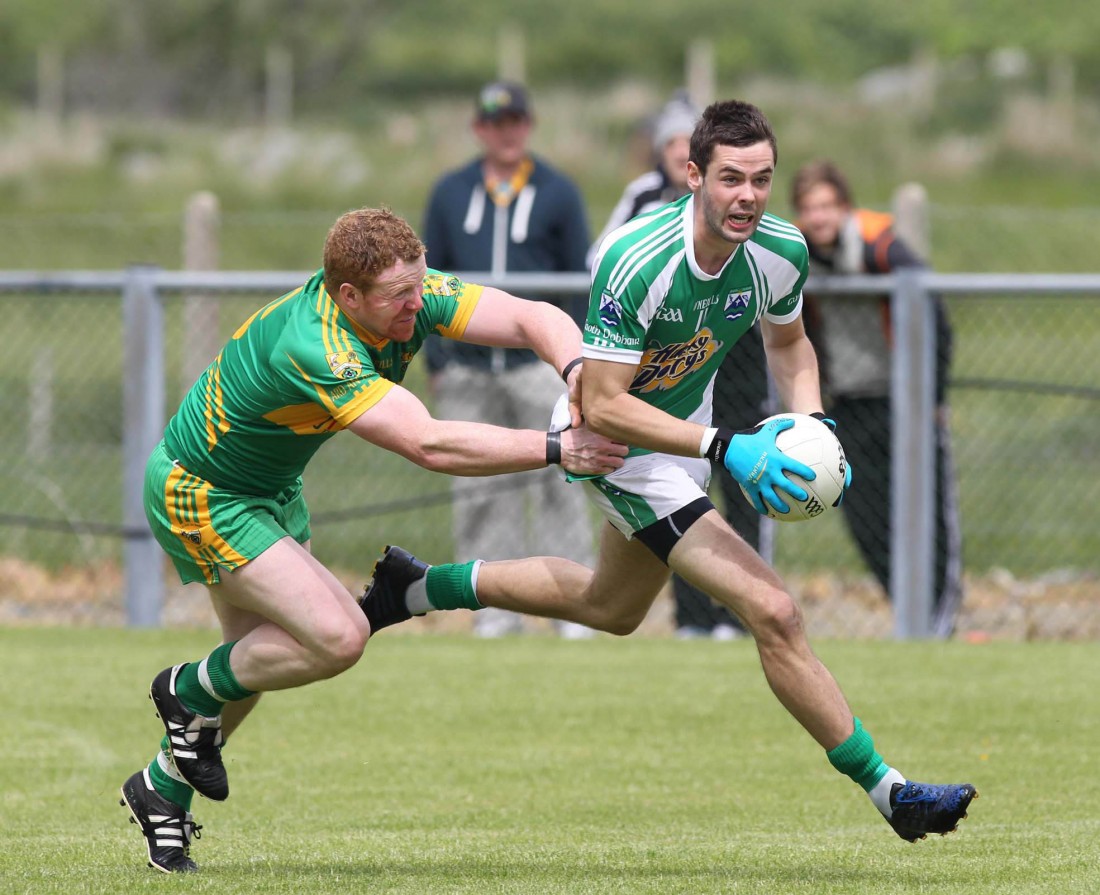 BY CHRIS MCNULTY IN ARDARA

THE Gaoth Dobhair team-sheet has been a much changed list in 2014.

The emergence of a bright crop of youngsters have heralded a new dawn around Magheragallon.

A 1-9 to 1-5 win over Ardara in Kentucky sends them third in a tight Division 1, with player-manager Kevin Cassidy hailing them impact of his young starlets.

Odhrán MacNiallais netted a crucial second-half goal, while Michael Carroll starred. Sixteen-year-old Carroll, a son of the late, great Francie Carroll, is graceful on the ball with a good eye for a score and an intelligence rare in a player so youthful.

Already on the Donegal minor team, he’s one of those who give hope for the future out west.

Gavin McBride and Gary McFadden played in Ardara and are also on the minor panel, while Kieran Gillespie, Niall Friel and Cian Mulligan were excused because of the Leaving Certificate. They, too, are on the Donegal minor panel and are now firmly affixed on Cassidy’s first fifteen.

“We have done a massive amount of work at underage level,” he said.

“For years, we had a good team but had no backup in the squad. Any day the county men were gone we were up against it. When you see six players from the club on the county minor squad it says a lot. We’ve taken them into the senior team here and they’re great to work with.

“The attitude is first class. They got that from Tom ‘Beag’ (Gillespie) who has done superb work at underage level in the club from under-12 in. These boys are about county squads and they know how to carry themselves.”
Cassidy’s team came from five down (1-4 to 0-2) at half-time to score an impressive win.

He said: “The breeze didn’t help. We needed a goal and, thank God, Odhrán popped up to get it at the right time.

“We didn’t play great, but we’ve got two points and we’ve learned a lot so it’s a good day.”

In his weekly column in Gaelic Life, former Donegal star and two-time All-Star Cassidy has championed the cause of the club player lately. Still playing himself, lining out here in the full-forward line, Cassidy believes Donegal have made the right call in parking the Championship until August.

He said: “In times gone by, you’d have been saying: ‘we might be out in two weeks’ time’ but at least now we know it’ll be August. We have a point now to work to. The date is set and it gives us all something to aim for.”

The turnaround was forged despite being down to fourteen men, but his opposite number, Adrian Brennan, saw his team finish with just thirteen players after the sending off of Kenneth Doherty and Kevin Byrne either side of half-time.

“I won’t go there,” said a clearly irritated Brennan.

“I don’t think it was a dirty game and it was strange to see thirteen men against fourteen. That’s as much as I’ll say.

“It was very hard with thirteen men against the breeze. That kind of advantage is something you can’t afford to give a side like Gaoth Dobhair.

“It was tough. Gaoth Dobhair are a very strong team.”