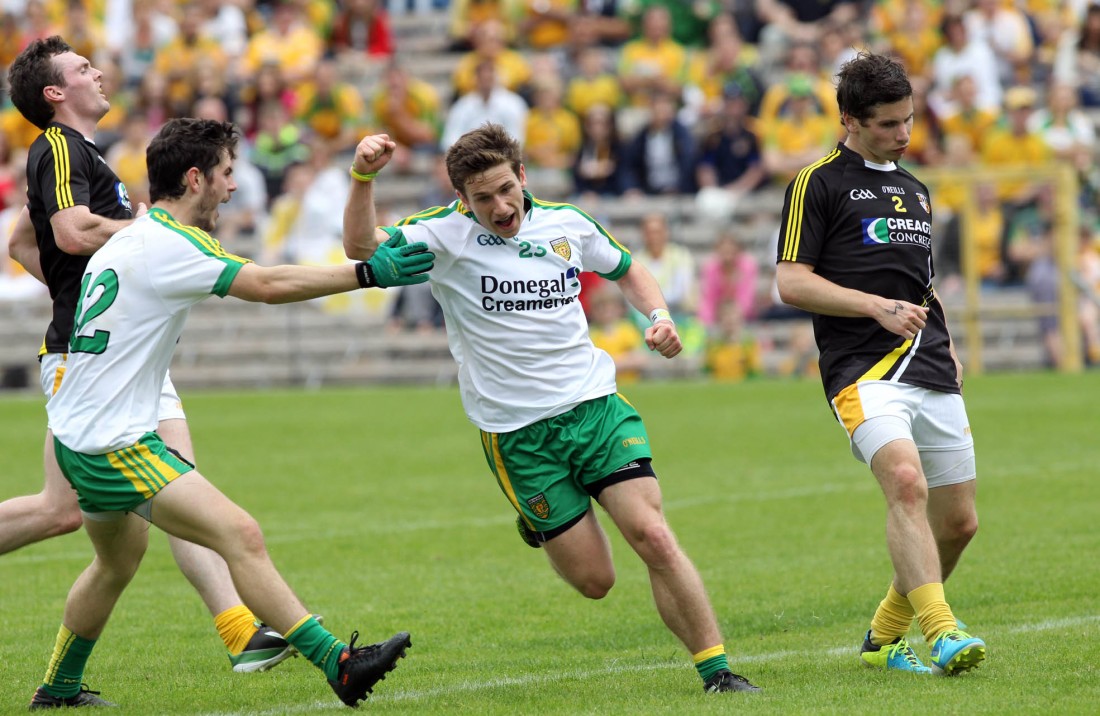 FROM CHRIS MCNULTY IN CLONES

The County Monaghan market town will be awash with Donegal folk on July 20th after Donegal’s seniors and minors sealed their place in the Ulster football finals by thumping Antrim yesterday at St Tiernach’s Park; both thanks to superb second-half performances.

Declan Bonner’s minors scored a 2-19 to 1-10 win with Ethan O’Donnell netting late in the first half and Jamie Brennan firing home the second goal. With the last kick of the first half O’Donnell’s goal gave them the fillip and Brennan bagged the second four minutes into the second half.

In Clones, O’Connor notched a goal and two points for the Donegal seniors, just three days after sitting his last exam, as Jim McGuinness’s outfit reached the Ulster final for the fourth successive summer.

Not since the five-finals-in-a-row Julys from 1989-93 – in the playing days of Bonner and McGuinness – has Donegal featured so consistently in Ulster’s flagship day.

A nip-and-tuck first half against stubborn Antrim gave way to Donegal’s deadly third quarter, when Leo McLoone and O’Connor struck gold, and a third goal by sub Dermot Molloy was the icing on a 3-16 to 0-12 cake.

McLoone produced almost a carbon-copy of his goal against Derry in the quarter-final when he tucked past Patrick Flood in the 42nd minute. Six minutes later, O’Connor hit a wonderful goal.

He’d started the move deep and was the man on the end of it again, via a switch of possession with Frank McGlynn. From distance, O’Connor didn’t baulk and his shot was executed with all the precision of a seasoned pro, finishing just inside the far post.

“When I got the ball in the middle of the field all I had on my mind was the goal,” he said afterwards.

O’Connor had been a late replacement to the team that was named on Friday. Hamstring and groin injuries contributed to the absence of Karl Lacey and Rory Kavanagh, while Neil Gallagher’s afternoon lasted just sixteen minutes before he had to leave the action.

O’Connor has been in the throes of exams for the last fortnight, but the 18-year-old was unfazed.

“There was a wee bit of class there and he does have that little trick up his sleeve,” said McGuinness of the Buncrana man’s goal.

“He was well goosed by the time we took him off as he had run himself into the ground.”

Odhrán MacNiallais was another who came in as an eleventh-hour change to the team. The Gaoth Dobhair man – who has played every game in 2014 – was Man of the Match after kicking four points and catching the eye with a dynamic display from centrefield.

“I was really delighted to get the chance because competition for places is pretty keen,” MacNiallais said.

The teams were level four times in the first half, including at half-time when they were locked at seven points apiece, before McLoone hit the net and the dam burst.

McGuinness said: One thing we did say at half-time was that the work we had done over the last month wasn’t reflective in the performance.”

The second half felt like a routine as Donegal took over to book a place against either Monaghan or Armagh – who meet in the second semi-final next Sunday.

The Donegal boss said: “That’s exactly where we wanted to be at. We’re there now and we want to make the most of this opportunity.”

Bonner, meanwhile, is set to ask for a deferral of the minor club championship when he meets the relevant people tonight.