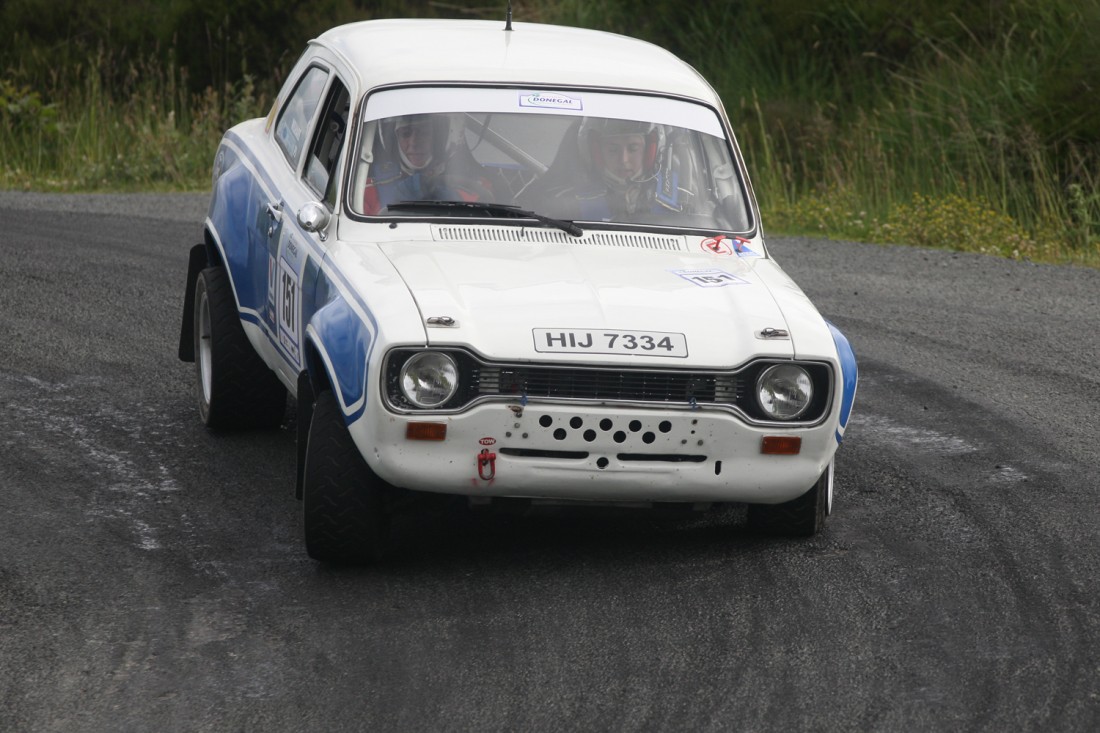 Cranford’s PJ Wilhare back at the wheel of a escort on the Donegal Rally at the weekend. Photo: Brian McDaid

SOMETIMES, the best assessments come from the outsiders.

At last weekend’s Donegal International Rally, huge crowds thronged to the county for an event now known as ‘the jewel in the crown’ of the Irish Tarmac Rally calendar.

There is a magnetic lure to Donegal for motorsport enthusiasts, shown last weekend again with the volume of people who flocked to view some of the world’s iconic rallying stages. Remember, these were the stretches of tarmacadam and dust chosen by Sébastien Loeb to test for Rally Ireland in 2007, when he and Daniel Elena took the Citroën around the loops of Knockalla, Fanad, Atlantic Drive and Glen.

Last weekend, Greg Strange took a team from iRally into Donegal to cover the event for their rally-dedicated app, which has been downloaded to over 700,000 smartphones and tablets worldwide.

Strange took to the iRally website to give his verdict this week.

“The strength of the event is the fierce pride that Letterkenny itself and Donegal generally feels for the rally,” he wrote.

“An event full of good practice and good humour, professionally presented without any pomposity, arrogance or stuffed shirts. And the eventual winners, cousins Declan and Brian Boyle from Lettermacaward, giving Donegal itself a first all-Donegal crew home win for over 30 years. The cousins greeted by huge cheers at the all-are-welcome prizegiving.

“This is a hugely-popular event many other organisers and promoters should attend and observe. Much can be learned from Donegal.”

Last Friday afternoon at 1 o’clock, the first of 147 competitors went under starter’s orders for the first of the twenty special stages at Breenagh.

By the time the first stage had reached its conclusion near Galwolie, Cloghan, there were already those for whom the weekend was over. For others, it had only begun.

“The competition was superb too,” reflected Eamonn McGee, the Clerk of the Course.

For only the third time in history a Donegal man won the event with Declan Boyle powering the Subaru WRC to glory. Partnered by his cousin, Brian, the Boyles became only the second all-Donegal pair to win the Donegal Rally, thirty-one years after Vincent Bonner and Seamus McGettigan in 1983. In winning, Declan was the first Donegal driver to cork the champagne since Letterkenny’s James Cullen way back in 1999.

“It was a big day for the county with people seeing that Declan was so close to winning it,” McGee said.

“By Sunday morning a lot of people were tipping him to win it and there was a big increase in the crowd after that.

“We’ve had a lot of men going close over the years, but no-one nailed it until Declan managed it at the weekend.”

Boyle was within touching distance by Sunday morning, holding an overnight lead of 37.2 seconds from Sam Moffett, the reigning champion.

And yet the crowds through the final six stages on Sunday were booming. From the off at Cranford to the finish line near Portsalon, right back to the ceremonial finish at the Mount Errigal Hotel in Letterkenny, otherwise known as Rally HQ for the weekend, the interest was there to be seen.

‘Safely’, reckoned Eamonn McGee, it was the biggest crowd since Loeb tackled the Donegal tar in 2007.

“The crowds have come back,” he said.

“The crowds were down a bit last year, but people are coming back.

“We’re delighted with the turnout. The crowds were huge around the county.

“The crowds were jammed tight in Glen on Sunday. There were 2,000 people in Glen alone. We had huge crowds on Knockalla, Fanad, Atlantic Drive, them all. At different places along the route, even aside from the hot spots, the crowds were good.” 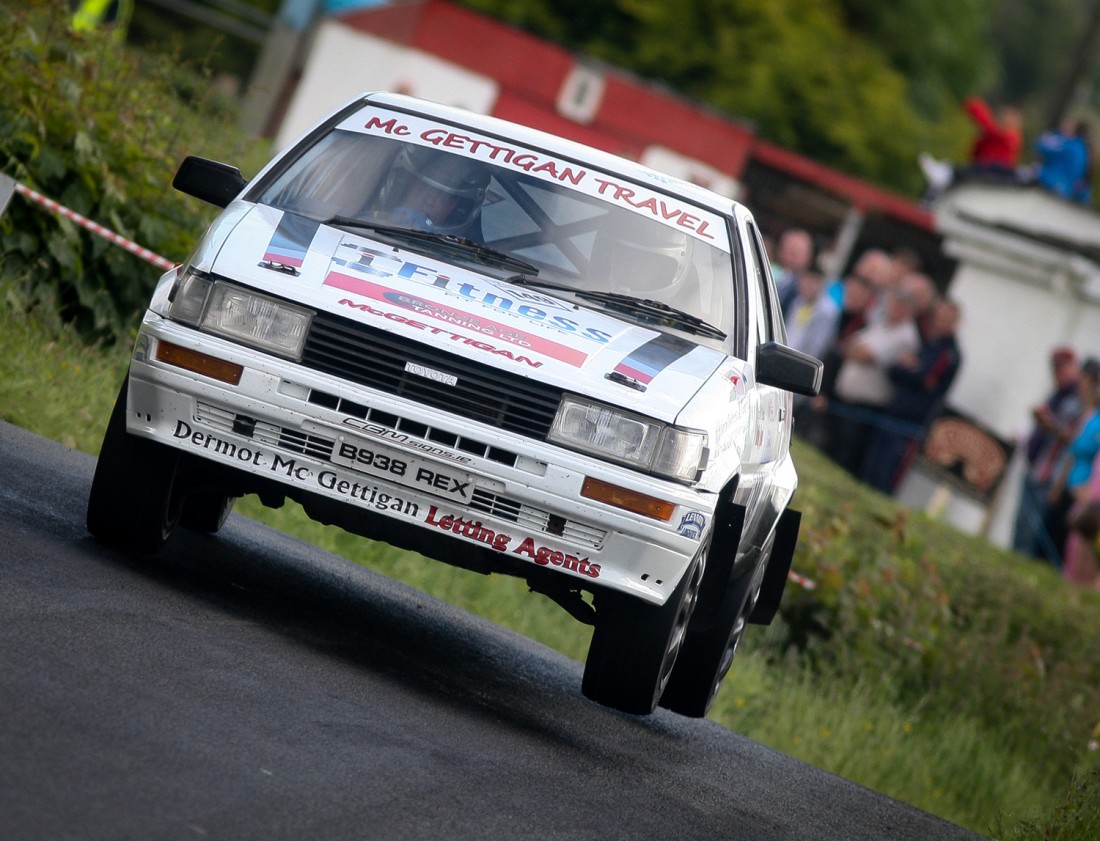 Letterkenny Kyle Mc Gettigan and Liam Doherty on the notes two wheel their way over the Barrack Bridge at Ballyare in the Donegal. Photo: Brian McDaid

Among its own, Donegal is king and the volume of local competitors tells its own story.

By Sunday evening, there were several crews who’d come off the door handles toasting their own slices of success. Class winners came in the form of Letterkenny pair Brian Brogan and Damian McGettigan, who won Class 14 in coming fourth overall in the National Rally, and there were others, too: Dunfanaghy’s Paul Creamer taking the honours in Class 11F, the Carrick/Ardara combination of Barry McGill and Derek Heena who won Class 9, Letterkenny’s James McDermott triumphed in Class 12, with the Sunbeam of Donegal town’s Dermot McGroary coming out on top in Class 10 and the Civic of the Dungloe O’Donnells, Martin and John M, winning Class 1.

And that’s not to forget the memorable weekend had by Letterkenny duo Conor Harvey and Gerard Callaghan, who finished second in the National Rally behind winners Gary McPhillips and Paul Sheridan, or Letterkenny’s Damien Gallagher and Mac Walsh, who were fifth in the National event, and Letterkenny co-driver Johnny Baird called the notes for Lisburn man Wesley Patterson, sixth overall in the National standings.

In the run-up to the 2013 event, title sponsors, Topaz, pulled the pin, leaving the Donegal Motor Club with a significant shortfall, given that Topaz contributed an estimated €600,000 over their six-year term. They have not been replaced, but there do not appear any concerns among organisers as to the future of the event.

“It did effect us to a point, but the club picked up the shortfall itself,” Clerk of the Course McGee said.

“The club takes the strain and hopefully with the success of the event someone will come on board with us. The potential of it was proved at the weekend. We wanted to highlight the benefit of the rally to any company that might be watching on.”

Donegal is unique in these times in that it remains the only three-day event left in Irish rallying.

“They get better value for money in Donegal,” laughed McGee.

“We did surveys of the crews and competitors and they all wanted us to stick with the three-day format. It was their wish that we retain the three days of competition. People said that it was too expensive, but the feedback we got was that the three-day rally was what they preferred. It’s a case of, if they want a three-day event we’ll provide it.” 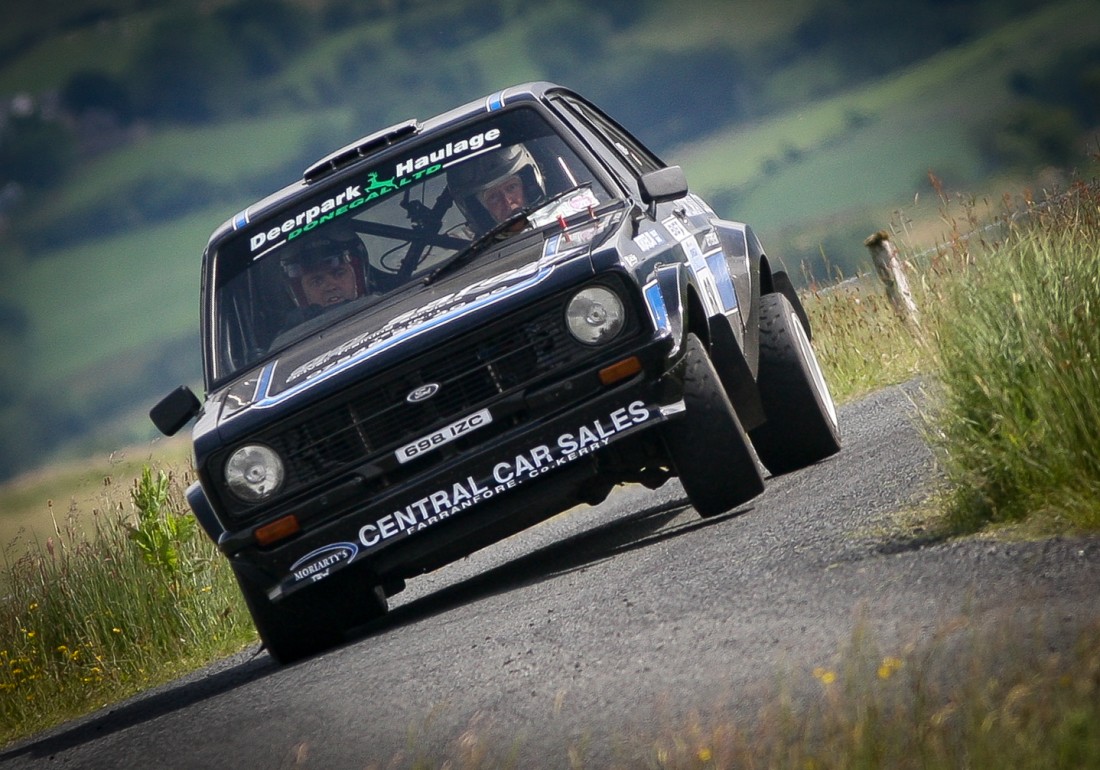 Musician from Off the Kuff, John Dolan and John Mc Glinchey from Newtowncunnigham in their Mk2 Ford Escort on the Donegal Rally at the weekend. Photo: Brian McDaid

Over the three days and twenty stages, a whopping 299km of road miles were mapped out – leaving it just 8km shy of the Wales Rally GB. The stages, in the main, were the same, but you can never quite be sure what Donegal has up its sleeve.

“We like to implement wee changes here and there,” McGee said.

“We don’t want to create a circuit-type event. That wee element of surprise makes Donegal special. There’s no good in having the crews come back with the same road books every year.”

It’s just part of its magic.