Advertisement
HomeSportSports OtherDonegal Rally: Boyles lead the way after day one, but curse the ‘bogey’
Advertisement 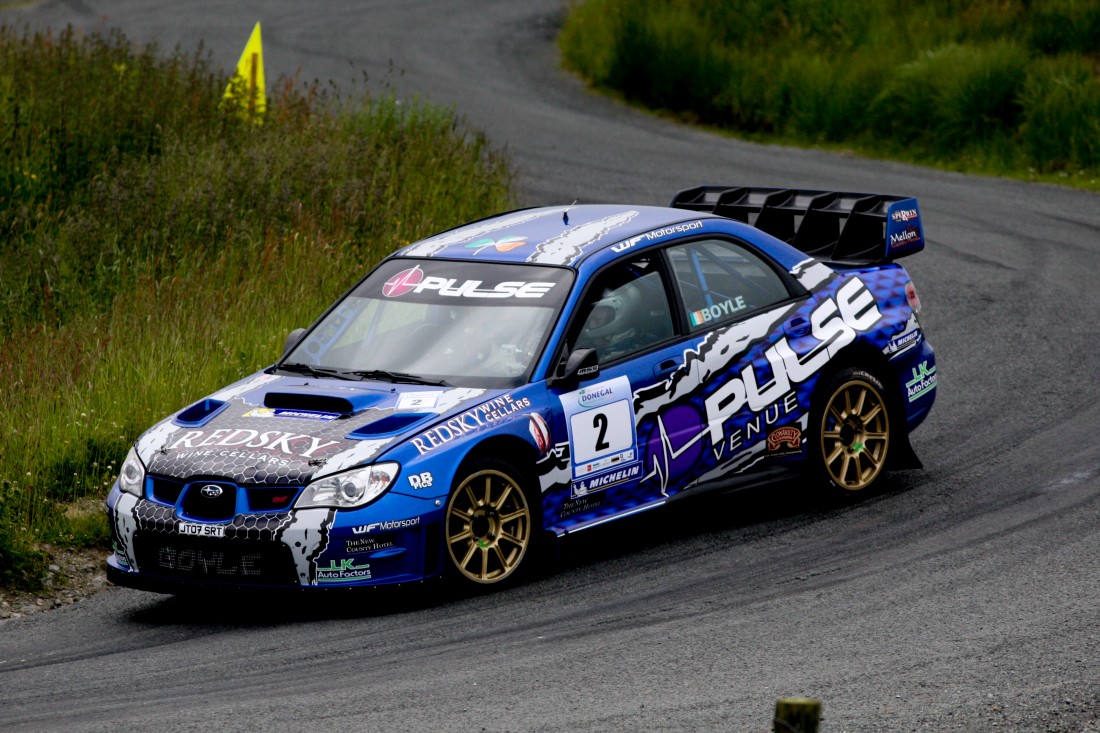 DECLAN Boyle beat the bogey time on two of Friday’s six special stages and holds a 5.2 second lead over defending Donegal Rally champion, Sam Moffett, at the close of the action on a scintillating day one.

The Lettermacaward man was quickest over special stages 4 and 6, the second loops of the stages at Breenagh and Letterleague, but he was given the bogey time for both. Boyle’s lead could have been as far out as eleven seconds, but the bogey times awarded mean that he’s 5.2 up on Moffett.

The sight of the blue WRC Subaru back at Parc Ferme in itself will content Boyle after his nightmare on the opening day last year, when he was forced to withdraw on the second stage.

Boyle came into Donegal, his home event, on form this year and he set to work early on, setting the quickest time on the first run around Breenagh, just 0.1 of a second quicker than Moffett, the young Monaghan man who scored a surprise win over the Donegal tar in 2013.

Boyle, with his cousin Brian calling the notes, said beforehand, ‘If we never won another rally it wouldn’t matter – this is the one rally we’d love to win’.

And by the close of an action-packed thriller over three testing early stages, Breenagh, Cark Mountain and Letterleague, he had a sound advantage, but said the bogey times were ‘a bit of a bitch’ given that he could have added another six seconds to the gap.

Boyle took the initiative on the second Breenagh run, pouncing after Moffett punctured, losing him around seven seconds, one kilometre from the end of the stage.

After the first three stages, it was Moffett who led the way from Boyle. Moffett was in a mood to show his triumph last summer was no fluke – and he had a 1.6-second lead at service.

When they scorched around the wind turbines at the top of Cark, Moffett threw down the gauntlet in the Fiesta, but when next they rounded the pylons it was Boyle – who said during the day that he was ‘taking it handy to bed in’ – who was at the head of the board.

Moffett lost some more time at the end of the final stage of the day, Letterleague, when the foam in his headrest came loose.

Fastest on stages 2 and 3, Moffett was also the quickest around Cark the second time.

2012 Donegal winner and reigning Tarmac Championship king, Garry Jennings, had a frustrating time of it. The Kesh man – with Letterkenny’s Rory Kennedy on board – wasn’t happy at all with the Subaru: “It just doesn’t feel right,” Kennedy had said at service. 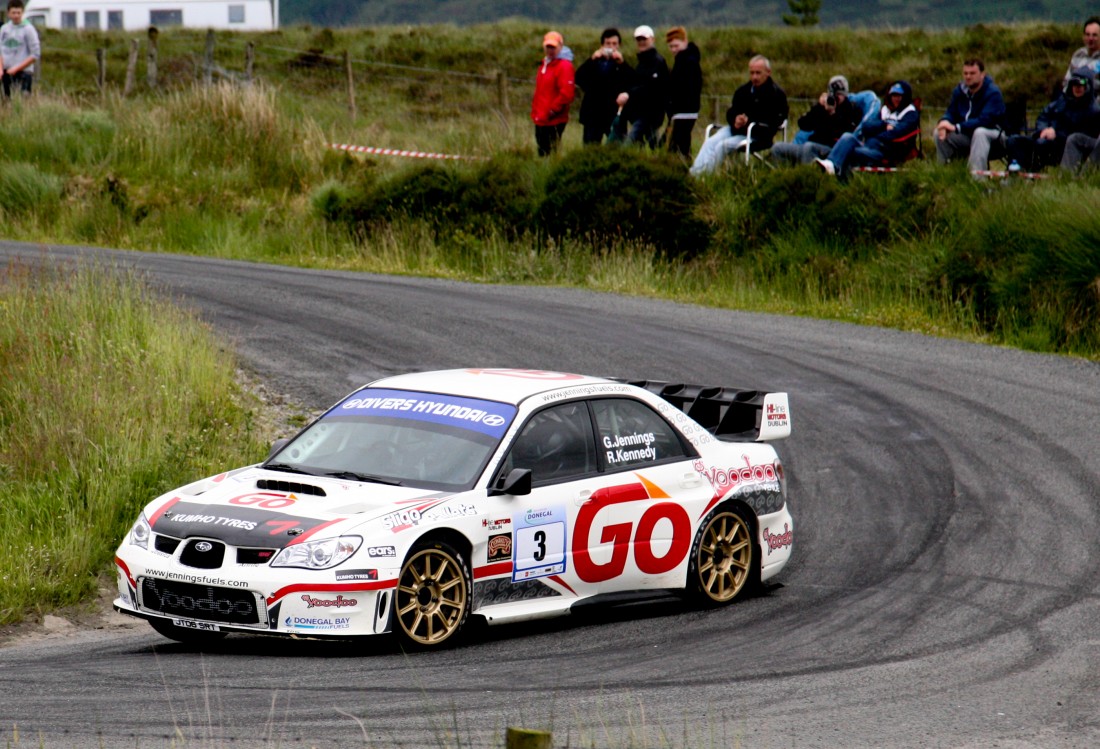 Jennings was fourth after those opening six stages, just 1.9 seconds behind Darren Gass and Enda Sherry, who overcame gear change problems to have a magnificent afternoon when the edged ahead of Jennings.

Donagh Kelly was in sixth having also improved and having significantly upped the pace on the afternoon stages, while Derek McGarrity had some early trouble that ended up being something as simple as a brake guarded becoming entangled on the back wheel.

STRABANE man Pat Kirk topped the pile in Group N at the end of day one, with a titanic tussle in the Evos developing as just 0.7 seconds stood between himself and Josh Moffett, with Eugene Meegan in third.

MONAGHAN’S Daniel McKenna had a lightening quick Friday, setting fastest times on five of the six stages to take a 12.9-second lead into Saturday morning. McKenna spun on stage four, but he didn’t loose too much time.

Gary McPhillips was in blistering form himself, but even his fine times couldn’t keep abreast of the on-a-mission McKenna.

Manus Kelly who came oh so close to a national rally win here last year – missing out by just 0.8 of a second – was 12.2 seconds behind McPhillips at the end of day one, but the Glenswilly man was fairly happy with his lot.

A big moment on the first stage, Breenagh, gave himself and Donal Barrett an early warning, but going into Saturday – and Manus’s home stages – they were nicely poised to mount a challenge.

Letterkenny man Conor Harvey was fourth after Friday and Brian Brogan – the Chairman of the Donegal Motor Club – sat in fifth. Termon men Mark Alcorn and Kevin McCafferty sat sixth and in the lead of Class 13 after those opening stages and looking forward to some action in their homeland on Saturday.

Ardara’s ‘Fear Bainne’, the ‘Flying Milkman’, Declan Gallagher saw his challenge end at special stage 5. Gallagher had been just 0.2 seconds behind McPhillips after the opening three stages, but he dropped well down the pecking order in the afternoon loop.

‘King of the Road’ Michael Dunlop – the motorcycle ace – made his debut in rallying on Friday and he moved along nicely, ending the day in seventeenth overall in the national event. 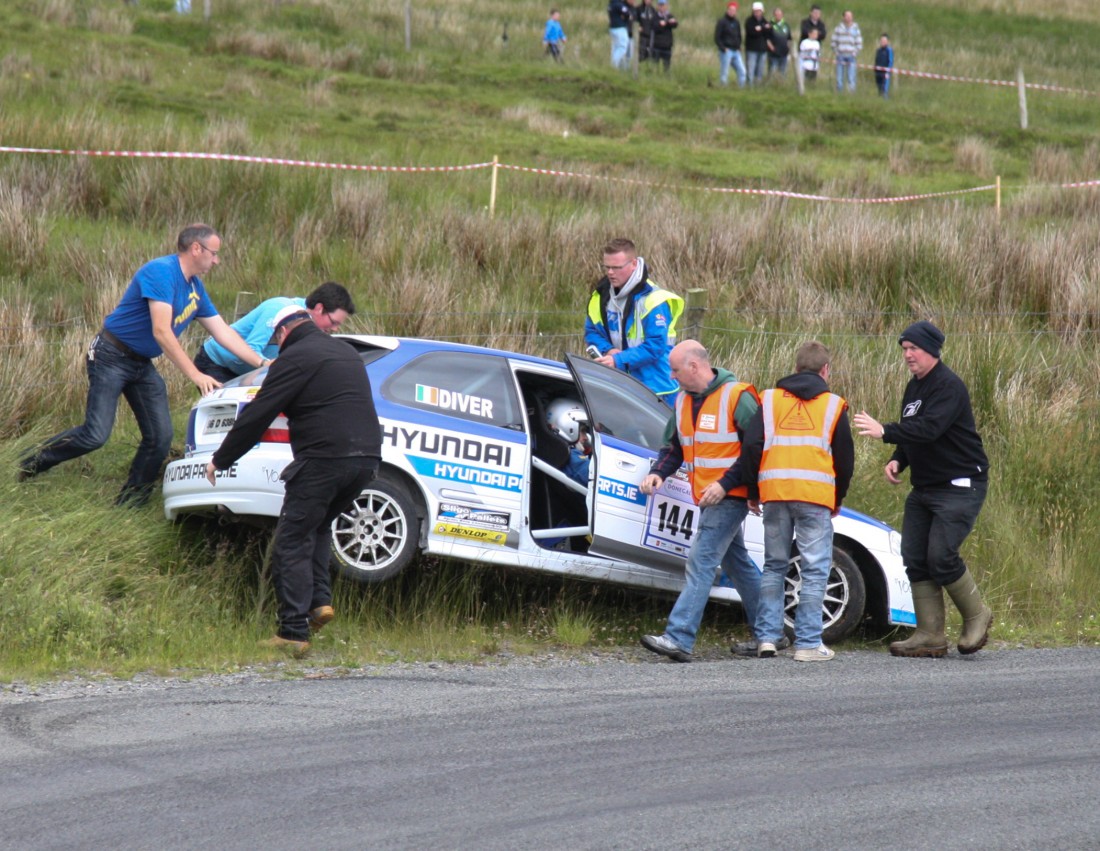 Crash…Terence Diver and Donal McElaney from Letterkenny crash out on the 2nd stage of the Donegal Rally. Photo Brian Mc Daid