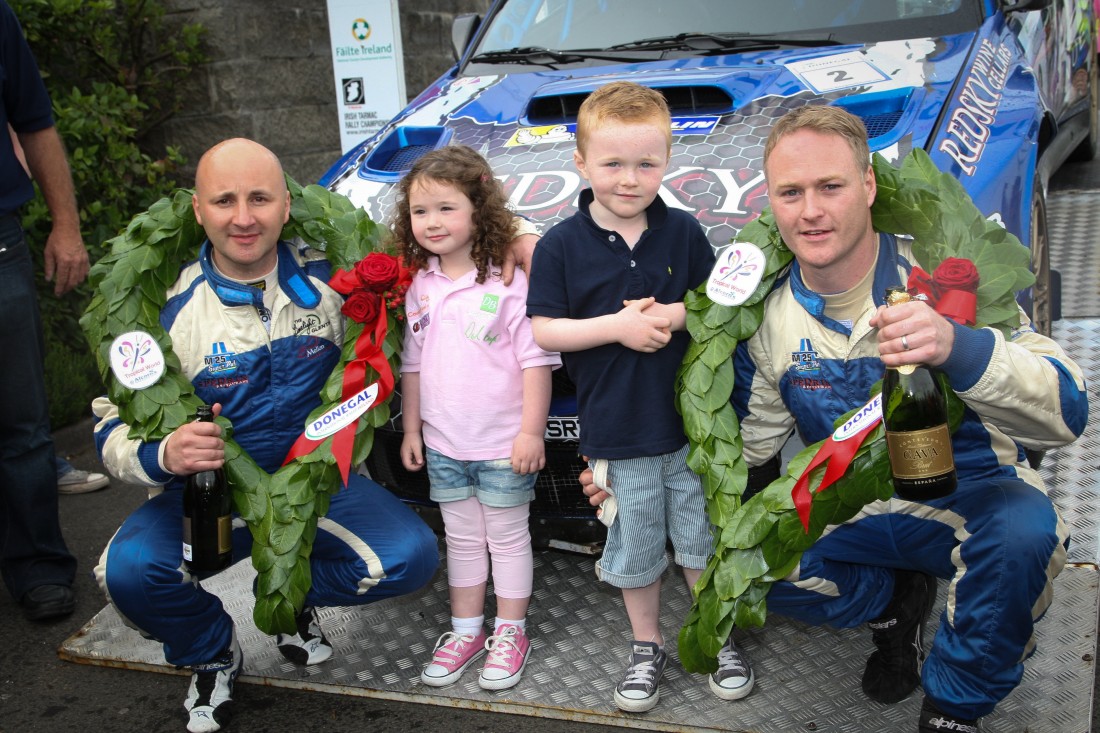 Ronan and Jesica Boyle enjoy the celebration with Declan and Brian Boyle as overall winners at the finishing ramp of the Donegal International Rally . Photo Cristeph/Brian McDaid

LETTERMACAWARD cousins Declan and Brian Boyle bridged a 31-year gap when they won the Donegal International Rally at the weekend.

When their Subaru WRC came across the finish line after the last of the twenty stages, Fanad Head, they were 34 seconds ahead of Sam Moffett, the 2013 winner.

The Boyles came into Donegal in flying form this year in the Tarmac Championship and they led at the end of each of the three days in Donegal.

Huge crowds thronged to the stages as the weather held up for most of the weekend.

For the Boyles, this was their crowning moment. In victory, they became the first all-Donegal crew (and only second ever) since Vincent Bonner and Seamus McGettigan in 1983 to win the event in the RS1800 Escort.

“It’s mighty to get the win,” said Declan, the first Donegal driver since James Cullen in 1999 to win the event.

“I really wanted this so much. It’s a dream come true for me.”

Donegal winners of the big prize are rare and there were joyous scenes at the finish ramp at the Mount Errigal Hotel where the Boyles toasted their win.

Declan had waited for this day.

Last year, they ended on the second stage and Donegal wasn’t kind to them when they also didn’t finish the Rally of the Rosses later in the year.

They came this weekend on a mission. On form after wins in the Circuit of Ireland and in Galway, Declan rocketed to the top of the leaderboard on Friday evening. His 5.2 lead from Friday became 37.2 twenty-four hours later.

Declan said: “This means everything; it’s a dream come true to win this rally.

“It was a very good rally. Donegal is the daddy of them all in the rallying calendar.

“I wanted to get this rally so much.”

Only Bonner and Cullen from Donegal have steered first over the finish ramp at the Mount Errigal. As Boyle returned to Rally HQ last evening he was emotional and it had been a draining weekend.

He added: “It’s great as well to get us those points because it leaves us in a nice position in the overall Championship standings.”

Riding shotgun was his cousin Brian, who bore an equally broad smile.

There were the nervous moments. On the final run of Special Stage 20 – the last stage of the rally – the Boyles overshot on two junctions, after having to change all the coils and plugs at Sunday’s first service.

“Just for a split second, you think that it could be gone – but thankfully we’re here,” said Brian.

“I can’t believe it. We had a tough battle.

“We’ve won a lot of rallies, but this is the number one.”

Moffett was a surprise winner last year, but he showed that to have been no fluke this weekend as he pushed Boyle by his lapels over the three days.

The Monaghan man said: “Declan and Brian were untouchable all weekend. They never made a mistake, fair play to them. It was a great weekend and a great battle.”

Garry Jennings and Rory Kennedy never really got going as they might have hoped, but the duo finished third, with Derek McGarrity good for fourth.

Gary McPhillips won the National Rally, ahead of Letterkenny’s Conor Harvey, while Group N was won by Josh Moffett. 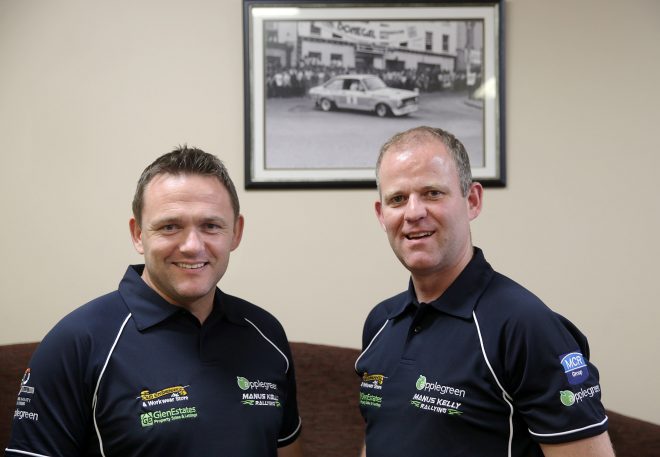 Kelly and Barrett eye the big prize once more

Manus Kelly and Donall Barrett, who will start umber one on the road this morning in their Subaru WRC,...