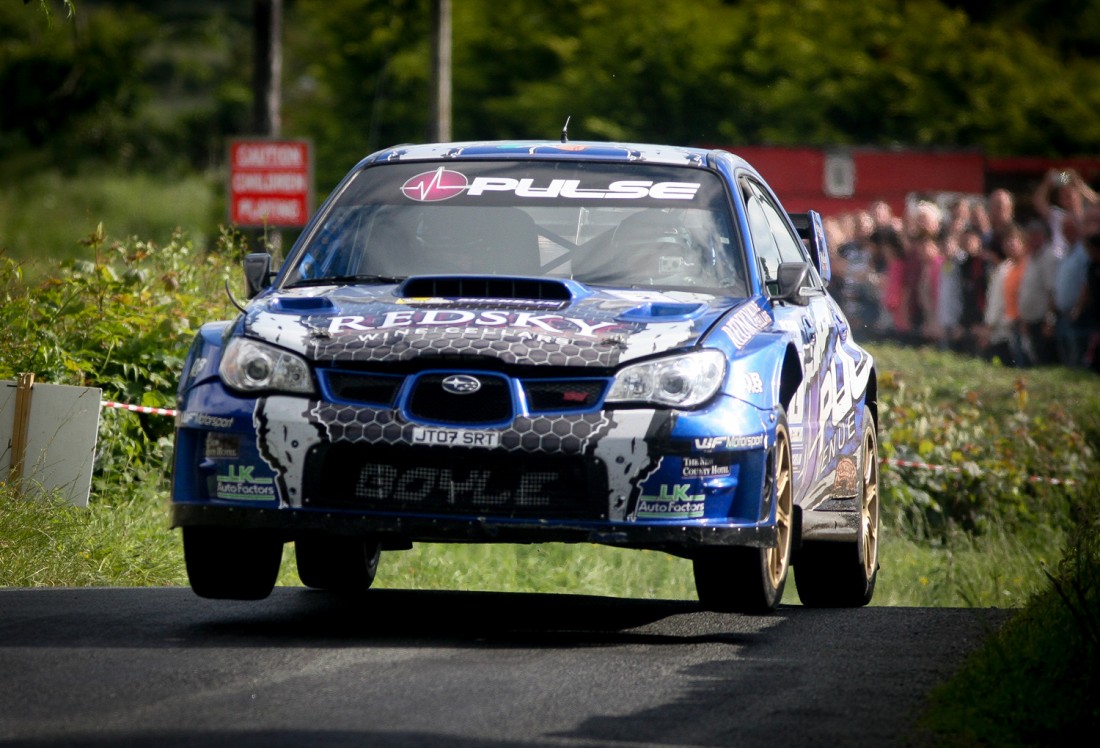 Donegal’s Declan and Brian Boyle in their Subaru on the Donegal rally at the Weekend. Photo; Cristeph/Brian McDaid

WHEN he scorched the WRC Subaru between those orange signs that marked the end of Special Stage 20 – the final stage, Fanad Head – in the Donegal International Rally on Sunday, Declan Boyle knew he’d achieved something special.

For only the third time in the history, a Donegal man had driven to victory in the Donegal Rally.

Even more significant was the fact that an all-Donegal crew – Declan having his cousin, Brian, calling the pacenotes – was set to cork the champagne for only the second time. Vincent Bonner and Seamus McGettigan haring around Letterkenny town as victors in 1983 is one of the iconic images from the storybook history of the event.

For Declan Boyle, it’s one that remains with him to this day.

“That year he won it was just unreal and I remember watching him come down through Letterkenny town; it would have made the hairs on the back of your neck stand,” he says, still basking in the glory of last weekend’s triumph, where he finished 34.8 seconds in front of nearest challenger, the 2013 winner Sam Moffett.

“I always looked and said: ‘I want to drive like that and I want to be able to match those bucks’.

“I waited a long time for this.

“It really is a dream come true. From growing up and watching rallying, this is what I’ve wanted: To win Donegal.”

The list of those from Donegal who went close: Paul Harris, Daniel Doherty, James McDaid or one of those many nearlys that James Cullen had along with his pair of wins in 1991 and 1999 shows just how difficult it is.

For Boyle, he had to look no further back than twelve months, when the Subaru went out of the rally on the second stage of the opening day.

“We were in a heap after last year,” he says.

“It was such a shock for us. Immediately afterwards you just sit there and think: ‘Right, that’s it, I’m packing it in’. It’s like the gambler, though. You go back and once you get a win again you can’t stop.”
Last year hurt. He was in it to win it and didn’t make it to the first service.

This time around, there was nothing left to chance.

Specialised mechanics Robbie McGurk and Wesley Emerson joined their team and he came in this year showing good form having won the Galway Tarmac Series and the Circuit of Ireland.

“What I was hoping was not to have to go through the same as I did last year,” he says.

“It’s a long event. When you have Saturday and Sunday coming, you can’t really look at going too hard on the Friday. Sunday’s a long way away at that stage and you need to keep your eye on the ball.

“We were leading Friday, were leading Saturday and into Sunday. You always think that maybe, just maybe you’ll lose it at some point. It was just brilliant to get it.”

Boyle started into the sport in 1996 when he bought a Toyotal Corolla Twin Cam.

After doing ‘a couple of wee hill climbs’ he and Patrick Ellis entered the Galway Summer Rally in 1997, but were out after eight of the nine stages due to gearbox problems. Declan left to work in England but retained an interest in rallying.

“I took a notion to start at it again and it took off from there,” he says.

“When I was away from it, I always wanted to come back.”

After having a couple of runs alongside his brother Jason in another Twin Cam, Brian eyed up an Escort that came onto the market and in 2012 himself and Brian won the national rally in Donegal. In the last two years, Gary McPhillips has won the same event.

Declan’s adrenaline was thirsty for a bigger challenge. In 2011, Tim McNulty won Donegal in an Impreza. Boyle saw it available and the rest, as they say, is history. Last weekend was their twelfth win in the car in two years; McNulty had fourteen wins behind the same wheel. 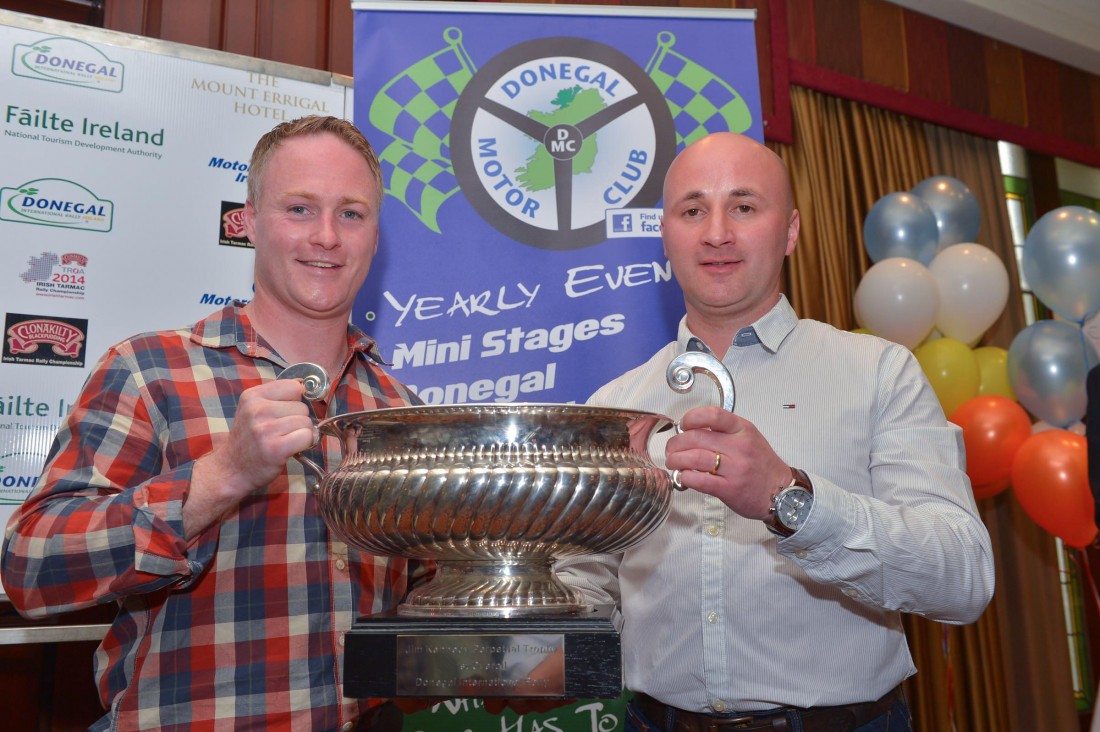 “There’s a huge difference,” he says comparing the Subaru and the Escort.

Boyle led by 5.2 seconds on Friday night, but Moffett chipped that back and more on the Saturday morning, recording the fastest time over Garrygort to go 3.3 seconds up. Boyle was content. He knew what was coming.

He says: “We said we’d let him take a bit of time out of us on Garrygort because we knew that Knockalla was our stage – that’s where we could get the time back.

Boyle ate up the Fiesta on Knockalla. It was here where he put the foot down and asserted the control.

“The two runs of Knockalla left us comfortable,” he says.

“We kept the focus on and it wasn’t too hard to do because we wanted it so much. We just kept chipping away. We were taking it handy, but you can’t just go too easy. You never know where the lead could disappear and, as well as that, all it takes is a puncture or something for you to lose a load of time. You could have a slip or a spin and, all of a sudden, the thing’s gone from you.”

There were the moments, too.

After Carnhill, the car was running on three cylinders. The cancellation of the second run of the Gartan stage was welcomed: “The car spluttering along like that wouldn’t have done us much good. In fact, it could have went the other way.”

In a forty-minute service on Saturday morning, the crew put four cylinders and four coil packs into the Impreza, but disaster almost struck at the start of the Atlantic Drive stage.

“When the 00 car left for Atlantic Drive the car wouldn’t start,” he says. “Garry Jennings and Derek McGarrity between them had a look. Jennings got her going. The clock was ticking and at the time control we had only a minute to get going onto the stage. The car, all of a sudden, just clicked. We kept her running in service then. Thank God she was ok.”

The Boyles set the fastest time on nine of the weekend’s stages. Sweeping through Atlantic Drive, those iconic bends, those scenic twists, they knew history beckoned. The crowds along the roadside cheered them home and on Friday night they’ll enjoy a party in their honour in McCready’s Bar in their native Lettermacaward.

“James Cullen has a couple and Vincent Bonner has one so to join that list is amazing,” Declan says.

“The feeling is just unbelievable. It’s fantastic to win any rally, be it the Cork 20, the Galway, the Circuit of Ireland – but Donegal is our home rally.”