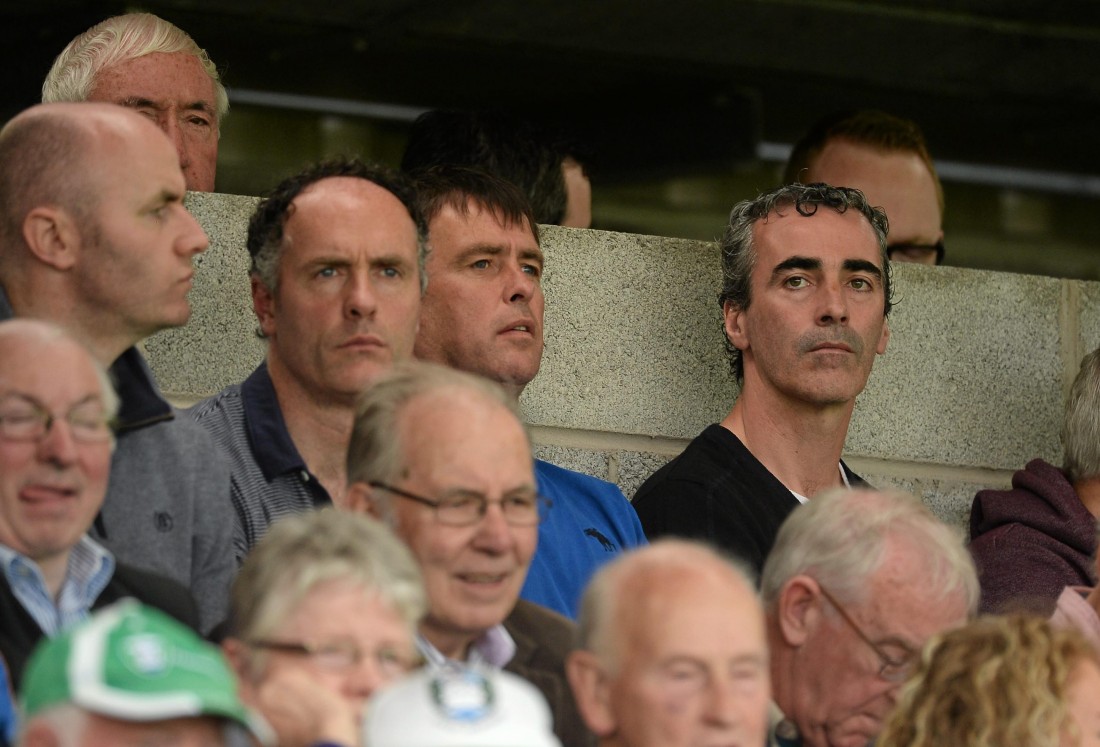 Donegal manager Jim McGuinness, right, along with Donegal selectors Paul McGonigle, Damien Diver and John Duffy at the game between Fermanagh and Antrim. Donegal play Antrim in the next round.

ANTRIM will provide the opposition for Donegal in the June 22nd Ulster Championship semi-final after the Saffrons overcame Fermanagh at Brewster Park.

Antrim led by eleven points at one stage, but Liam Bradley’s side needed a goal-line block from Kevin O’Boyle to prevail 2-18 to 3-13.

While it has yet to be confirmed, it is expected that St Tiernach’s Park in Clones will host the game. It will be a Donegal-Antrim double header on the day after the Antrim minors defeated Fermanagh 5-10 to 2-8.

Jim McGuinness watched Antrim’s narrow win in the company of his selectors Paul McGonigle, Damian Diver and John Duffy, while minor manager Declan Bonner and his backroom team were also in attendance.

This was Antrim’s first Ulster SFC win since 2009, when a win over John Joe Doherty’s Donegal started a run that took them to an Ulster final they lost to Tyrone.

A Brian Neeson goal gave Antrim a foothold and they were 1-9 to 0-1 ahead before Fermanagh revived and a Sean Quigley goal late in the first half brought Pete McGrath’s team back into it.

A second Antrim goal, scored by Kevin Niblock, was crucial as Fermanagh hit back with Barry Owens and Marty O’Brien netting goals. That brought them to within two points and the home crowd sensed a dramatic win when Ryan McCluskey bore down on the Antrim goal. McCluskey, however, saw O’Boyle get in behind goalkeeper Paddy Flood to take the ball off the line.

“I think that the players will take a lot from this victory but we know that it will be a much bigger test against Donegal,” Antrim boss Bradley said.

“We will be going in against Donegal and we have to bear in mind that no one gave us a chance going in against Fermanagh. We were being written off by everyone but I knew that there is a great spirit within this Antrim side.

“They have achieved a lot over the past two or three years and now we face a big challenge against them.

“I have not been involved in a championship win with Antrim since 2009 so I know what this win will mean to the people of Antrim and in particular to the team’s loyal supporters.

“I hope that even more people will get behind us snow for the game against Donegal and that we will be able to do the county proud.”

Jim McGuinness, meanwhile, is hoping to be able to select from a full-strength panel in three weeks’ time. Rory Kavanagh and Karl Lacey are expected to play for their clubs, St Eunan’s and Four Masters, in the All-County League today.

Kavanagh (abductor) and Lacey (heel) have what McGuinness has called ‘minor injuries’ and the pair will consult physiotherapists before deciding whether to play.

Neil McGee and Patrick McBrearty sat out action at Comortas Peile na Gaeltachta for Gaoth Dobhair and Kilcar with foot and quad injuries. McGee has a bruised bone, but is not in the doubtful bracket. Regarding McBrearty, the manager said: “He got a quad injury in the warm-up against Derry. It will take a wee while to heel but it won’t be an issue for the game (the semi-final against Antrim).”

Midfielder Neil Gallagher played a full game for Glenswilly on Saturday evening against Naomh Conaill. McGuinness said: “Neil is pushing hard again and he was going well in training. We just want to keep him going the way he is going now.”

The Antrim clash offers McGuinness and Donegal the opportunity to reach a fourth-successive Ulster final.

The Donegal boss said: “There is a good buzz and everyone is looking forward to getting their teeth into the training. We’re in the next round and we have that to focus on now.”