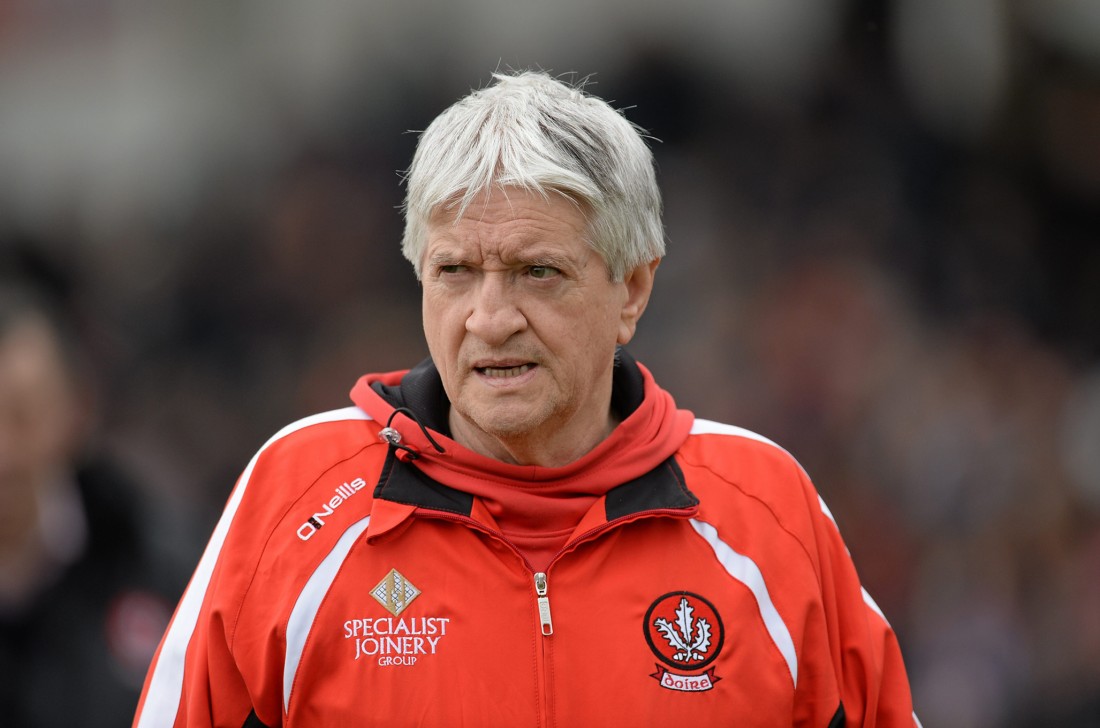 TIME has healed the wound, but Brian McIver still displays painful scars from the night he resigned as Donegal manager.

It was way back in September 2008 when McIver, shaken and stirred, left the Pyramid Suite of Jackson’s Hotel, visibly upset and angrily confused.

Dressed in a Donegal tracksuit, he had fielded questions from club delegates at a county committee meeting for close to an hour.

Having delivered his bi-annual report to delegates, McIver came under fire from certain quarters. When a motion of no confidence was tabled, McIver was stunned. Having informed the meeting of his plans for the next season, McIver stood down there and then.

Choking back the tears, clutching the sheets of A4 paper on which his notes were printed, McIver gave his parting words as the Donegal team manager: “If the feeling in the county is that we are not making progress then it is up to me to hand over the reigns and wish Donegal good luck.”

It took time, but McIver eased himself back into the game. His path has crossed Donegal, but this is the first time he goes into direct combat as the manager of the opponents.

It’s a windy night in Belfast and the Ballinderry man clasps his hands, draws a breath and narrows the eyes as he recalls the ‘Night of the Long Knives’, September 1, 2008.

“I still had the belief that the potential was there. Unfortunately a few other people in Donegal didn’t see it like that but, believe me, I never lost any respect for those players.

“We had discussed our plans for the winter time and we had most of the things ready. I fully intended to carry on and certainly had no intentions of leaving the Donegal job – absolutely none. Certain people didn’t see it like that and what happened, happened.”

McIver feels his players were ‘hung out to dry’. “Nobody really thought about what they felt,” McIver says. It emerged later that week that Kevin Cassidy, his captain, sought a means to attend the meeting and bat for McIver.

The door was closed and, ironically it was the Gaoth Dobhair club’s delegate, Donald Breslin, who seconded the motion, proposed by St Eunan’s representative Paddy Mullen, who explained to the meeting that his club had discussed the position of McIver at a meeting and had mandated him to table the proposal of no confidence.

“In three years under Brian, we seem to have gone back. We have regressed rather than progressed. We believe – and this is not a snipe at Brian McIver – that the only way we will get the necessary intensity into our game is if a Donegal man is in charge of a Donegal team.”

While the motion was ruled out of order by Sean Kelly, the then Chairman, McIver had heard enough and left his position, cutting a lonely and forlorn figure as he departed.

Former Donegal manager PJ McGowan, at the time the Vice-Chairman, spoke of his ‘disgust’ and one of the few supporting voices from the floor came from Sean Dunnion, now the Chairman of the Donegal Board, but then the Four Masters delegate who branded it ‘an absolute disgrace’ and ‘very demoralising’.

A year previously, the scenario was the flip side of the coin: McIver resigned following a qualifier defeat to Monaghan in Omagh but was coaxed back by the players.

“Listen, I was annoyed the way the Championship ended,” he says now, “but we met with the players and we decided to give it another shot.”

Their Ulster Championship of 2007 ended spectacularly when Tyrone annihilated them in Clones. McIver had, just two months previously, delivered a first-ever National League title to Donegal and they went a step further by beating Armagh in the opening round of the Championship at MacCumhaill Park.

“To have won the League and then to get Armagh off the back was huge. I felt that the players maybe drifted a bit into the Tyrone game.

“I still had the belief that there was enough strength in depth and certainly talent in the panel to win an All-Ireland.

“I felt the side that won the League in 2007 was under severe pressure. There was this thing in Donegal about losing finals, about not being able to win in Croke Park and about not being able to win big games. I felt that was a great myth to kill. I always felt that they could kick on. We had Armagh in the Championship and for ten years they had a stranglehold on those Donegal boys. They broke that, but unfortunately they never fully appreciated the difference when it came to taking on Tyrone later on that year.”

In 2006, his first year at the helm, Donegal won promotion, but were beaten by Louth in the Division 2 final replay. Armagh won by a goal in the Ulster final and Donegal were pipped narrowly by Cork in a gripping All-Ireland quarter-final. McIver, to this day, retains the belief that his tenure could, and maybe should have yielded the bigger pots.

“I always felt that those boys could come through as really top players,” says McIver, who introduced the likes of Michael Murphy, Anthony Thompson and David Walsh to senior championship football.

“When Jim (McGuinness) came in he got them to buy in totally to the preparation. They got their just rewards. I have great time for the Donegal players. I was delighted to see them coming through and winning their All-Ireland. I remember the first time I saw Michael Murphy playing football. I just said to myself: ‘A star’. I was delighted to see him go up and lift the Sam Maguire. No lad deserved it more.”

In 2002, he won an All-Ireland Senior Club Championship with Ballinderry Shamrocks.

When Donegal went on a managerial search in 2005, as Brian McEniff turned out the light for the last time, candidates were scarce and so the County Board went headhunting. Chairman Charlie O’Donnell put in the call to McIver: “I was really surprised to get the call. Outside of those I’d have seen on TV I didn’t know any of the players. But I always knew there was talent – real, raw talent – in Donegal so I jumped at the chance.”

He looked to have gone in 2007 when, after that damaging defeat by Monaghan, he revealed that he was stepping down, only to defy that old sporting guide and reverse his decision. He was sticking by his guns, even when he met his backroom team in his Ballinderry home until midnight at one sitting. He says: “Those men were prepared to do anything. Eventually I stopped them around 12 o’clock at night and said ‘look, I am overwhelmed by what you’re saying, but what I need is the same thing coming from players.'”

A few days later his arm was twisted, but when he unzipped the tracksuit top as he stepped into his car that September night a year later it was a decision he regretted.

With Derry, McIver has been working the oracle to good effect and there are many similarities between then and now in terms of analysing the improvement in the Sperrins compared to his initial days with Donegal. Heavily beaten by Dublin in the final, the League was good to Derry overall.

McIver says: “We talked at the start of the League about how they’d have to deal with playing against household names. Outside of Donegal we have now played against a great percentage of the top sides in the country. That has been a good learning experience for us. Hopefully we can build on that over the next couple of years. The fact that so many young lads came through and did so well has been a big positive.

“They’re a young side, much like Donegal were when I came in. There is a similarity there. I would like to think that over the next four or five years that these Derry boys can have as much success as Donegal have had.” 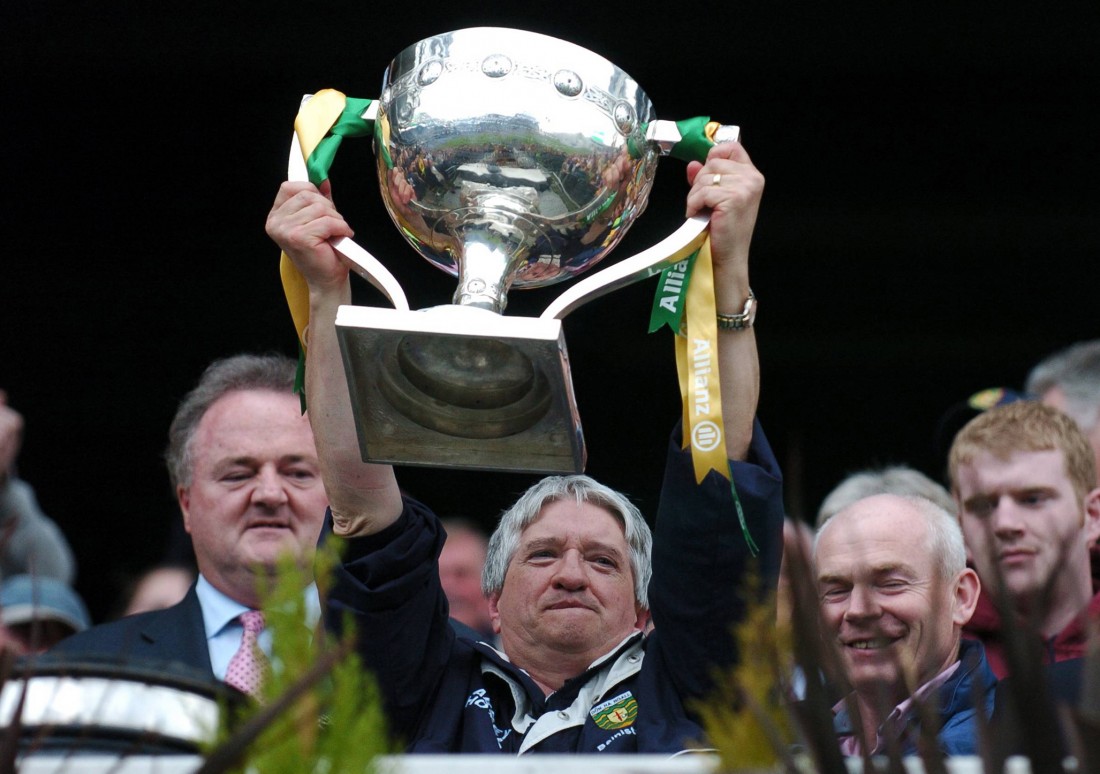 The nature of his departure from Donegal left him questioning if he’d ever return.

The break recharged the batteries and when Down came calling ahead of the 2010 campaign he answered. He’d been working with Paddy Tally at St Mary’s and when Tally joined James McCartan’s jigsaw he sounded McIver out. They reached the All-Ireland final in 2010. The previous year had been quiet in the McIver home, but now the buzz was back. “It’s hard to get that bug totally out of the system,” he says.

McIver is still in touch with a lot of his confidantes in Donegal – ‘a great three years with a lot of fond memories’, he recalls – but he’s on the other side now.

“It is quite possibly the biggest game of the opening round of the Championship – across all four provinces,” he says of Sunday’s meeting in Celtic Park. “Donegal were All-Ireland champions in 2012 and I know myself a lot of those players and the challenges that they’ll present for us. It has all the hallmarks of a great game.”

When he stepped aside in Donegal, one of his few comments at the time said that he could never manage a team against those players whom he’d managed. It’s taken time, but the paths finally cross on Sunday. At times McIver’s shows the renowned disciplinarian and former schoolteacher’s edge. He considers his comments from 2008, but the steely Loughshore stare shrugs them off.

“That’s six years ago now and things have moved on. I’ve been working with Derry now for two years so the full focus is on Derry for the 25th.

“Sentiment will go out the door that day.”